Artists have replaced roadside ads around the country with artworks in the wake of Australia's devastating bushfires. 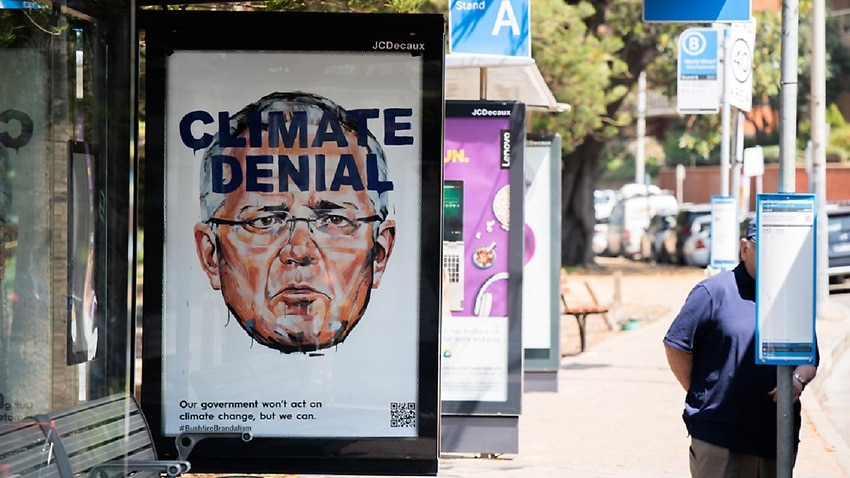 An artwork from the Bushfire Brandalism campaign. Source: Supplied

Outdoor advertisements in Australia's capital cities have been replaced with artworks protesting the government's response to climate change in what organisers have dubbed "bushfire brandalism".

Calling it the country's "largest unsanctioned outdoor art exhibition", a collective of 41 artists put up dozens of posters in Sydney, Melbourne and Brisbane that were made during the recent horror bushfire season.

One of the artworks being put up. Source: Supplied

The designs focused on a range of subjects including the fossil fuel industry, the bravery of the local firefighters and the destruction of the country's flora and fauna.

The artworks were put up in Sydney, Melbourne and Brisbane. Source: Supplied

One of the co-organisers, who asked to remain anonymous, told SBS News the idea started on an Instagram group message.

"There was this universal feeling of powerlessness and helplessness amongst all the artists."

A poster being unfurled. Source: Supplied

She said the artists were particularly concerned "how things were being handled over the past couple of months by the government".

"The act of taking over the advertising spaces is a symbolic thing, it's the narrative of taking back public space or space in the media that we felt wasn't being given to these issues."

"In conversations with the artists, I don't think there's anyone that hasn't been personally affected by the bushfires this year, or they have had a family member who was affected."

Each artwork also features a call to action and a QR code to a charity of the artist's choosing.

"There's everything from fire relief for First Nations communities to water conservation to the Climate Council," the co-organiser said.