Prime Minister Scott Morrison has asked the Australian embassy to investigate the assault on a Network Seven reporter and cameraman covering the US protests. 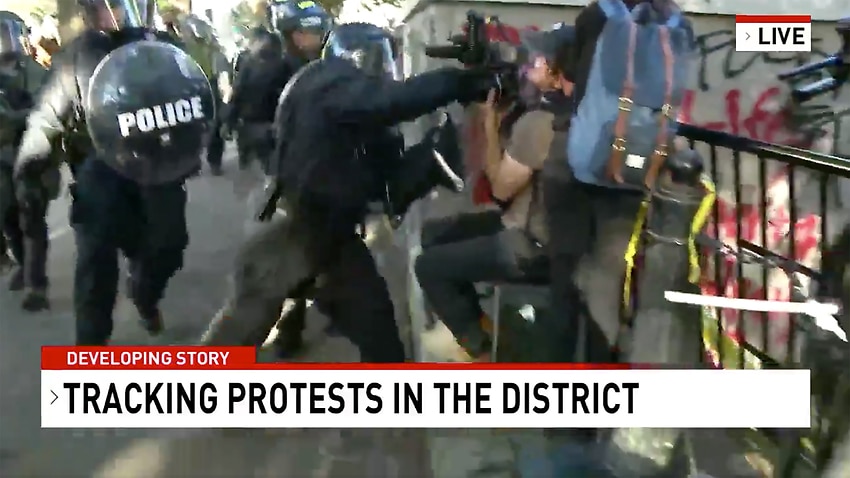 An Australian journalist and cameraman have been assaulted by US law enforcement in what press freedom advocates say is one of the latest cases of more than 100 targetted "attacks" on media during the widespread protests against police brutality.

During a 7News Australia live cross from outside the White House on Tuesday morning cameraman Tim Myers was physically hit by police even after journalist Amelia Brace shouted “media”.

The footage, broadcast on live on Sunrise, shows police in riot gear storming past before hitting the camera which then goes black. Both the reporter and the cameraman were located to the side of the main group of protesters and did not appear to be participating.

Following the attack, Brace, visibly shaken, says: “You heard us yelling there that we were media but they don’t care, they are being indiscriminate at the moment.”

“They chased us down that street, they were firing these rubber bullets, there is tear gas, we are really surrounded by police and you really saw the way they dealt with my cameraman, Tim, they were really violent and they don’t care who they are targeting at the moment.”

A police officer goes for the camera as the Network Seven crew were broadcasting live. Source: Twitter

Prime Minister Scott Morrison described the attack as troubling and has asked for an investigation.

Mr Morrison has spoken to Seven to check on the crew's welfare and offer his government's support, should they wish to pursue a formal complaint against police through the Australian embassy.

He also ordered the embassy to investigate the incident and register Australia's "strong concerns" with local authorities.

The incident is understood to have taken place as police attempted to clear a path for President Donald Trump to walk to a photo opportunity as the protests rage for a seventh day.

A day earlier, the peak body representing journalists in Australia wrote to the United States Ambassador seeking an end to the targeted attacks on reporters, camera operators and photographers covering the George Floyd protests across the country.

According to the US Press Freedom Foundation, which is tracking “press freedom violations” during the protests, there have been at least 128 separate incidents against media as of Tuesday morning, including more than 60 assaults (physical or by rubber bullets) and 20 arrests.

These incidents include the arrest of a black CNN reporter while he was in the middle of a live cross, the detention and search of Nine News Australia reporter Tim Arvier and his crew, and freelance journalist, Linda Tirado, who lost her sight in one eye after being struck by a rubber bullet or marking round in Minneapolis.

an update: I am permanently blind in my left eye, and the docs absolutely refuse to let me go back to work for they say six weeks. I’m definitely not allowed to be near smoke or gas.

“It is apparent that across the US, law enforcement agencies have used the protests to attack the media,” Media Entertainment and Arts Alliance (MEAA) federal president Marcus Strom wrote in the letter to Ambassador of the United States of America, Arthur B Culvahouse Jr, on Monday.

“On many occasions, the incidents have been videoed and in many cases, the media is some distance away from the active protests, and sometimes even standing behind or within police lines.”

Many journalists and media experts have pointed out that the widespread and visible nature of the arrests and attacks on the media has never been seen before in the US, where the first amendment dictates the right to free speech.

Going into tonight, here's our updated count on press freedom violations during the #GeorgeFloyd protests

In the past, visibly displaying media credentials has offered some degree of protection from authorities while covering unrest, particularly for employees of mainstream newsrooms.

Mr Strom told SBS News it was "extremely unusual" to see so many incidents against media across multiple locations. "Journalists need to be free to cover incidents like this so the citizenry can understand what is going on," he said.

"These look like attacks of the police designed to intimidate coverage of how police are handling these protests."

International investigative journalism collective, Bellingcat, has independently identified 101 instances of police attacks on journalists as of Tuesday morning, with senior analyst Nick Waters stating it is clear the media is being “deliberately targeted”.

“Although in some incidents it is possible the journalists were hit or affected accidentally, in the majority of the cases we have recorded the journalists are clearly identifiable as press,” he said.

In a statement on Monday, General Secretary of the International Federation of Journalists (IFJ), Anthony Bellanger, called on Mr Trump directly to stop “whipping up hatred of the media”.

“From the President to the law enforcement authorities it is time to stop the deliberate targeting of journalists,” he said.

“Whipping up hatred of the media has consequences and we are now witnessing the outcome – journalists shot, permanently disabled, forced to flee, being arrested and beaten.”

The US President has frequently campaigned against the media since he was elected, often disparaging the so-called “fake news” and labelling the media "the enemy of the people".