Cambodian Prime Minister Hun Sen has described the burning of his effigy in Australia an "insult". 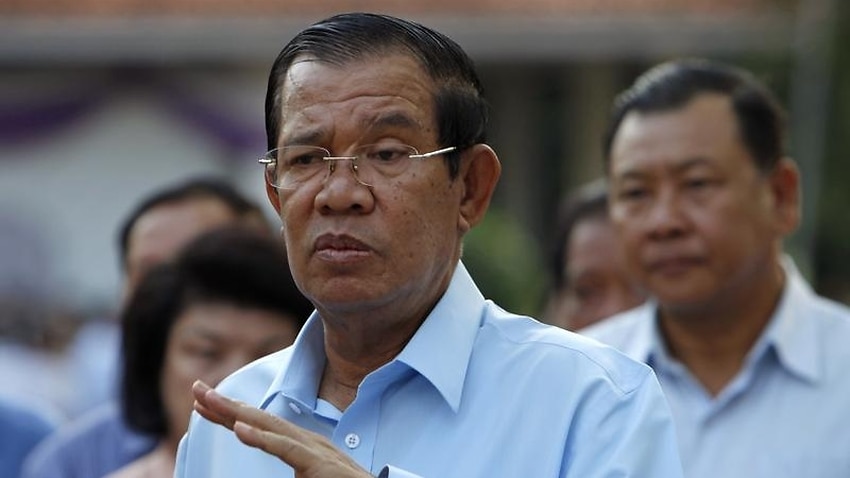 Cambodian Prime Minister Hun Sen has denounced protesters in Australia as dogs for burning his effigy, days after threatening to beat them up.

Hun Sen, who has ruled Cambodia for more than 30 years, has forced the closure of an English-language newspaper and the dissolution of the main opposition party and jailed government critics.

Rights groups and Western nations have decried the crackdown ahead of a general election set for July.

Hun Sen last week threatened to beat up protesters if they burnt his image during an upcoming ASEAN-Australia Summit in Sydney on March 17 and 18.

That prompted a Cambodian community in Australia to burn his effigy on Saturday and release images online.

"This is an insult," Hun Sen said at a ceremony in Kompong Cham province on Thursday.

"It is tough to bite back when a dog bites our leg," he said, adding that his trip to Australia would go as planned.

Hun Sen's threat to beat up protesters was met with condemnation in Australia.

"These are outrageous statements," Clare O'Neil, a federal Labor MP, said in parliament.

"We are living in this beautiful democratic country. Those rights need to be extended to all Australians, including those of Cambodian descent."

Hun Sen has frequently said he wants to remain in power for at least another decade. The dissolution of the opposition Cambodia National Rescue Party eliminated a major obstacle to his re-election ahead of the July election.