Early childhood educators are being taught how to best support children who may have experienced trauma. 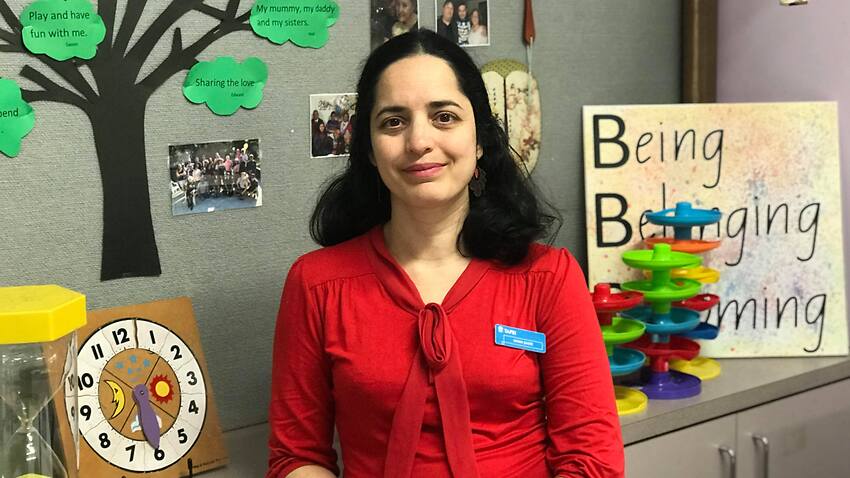 When Manik Gadre first began her career in early childhood education 16 years ago, discussions around how to deal with trauma in young children, especially those from refugee backgrounds, were few and far between.

It was an issue nobody wanted to talk about, she says, so she made it her goal as an educator to change that.

“It’s a big issue that's quite hidden and taboo … and that's when I realised my students needed to be made aware of it because I wasn't aware of it as a young teacher,” she told SBS News.

Ms Gadre said it is often not acknowledged that children as young as one to six years old can experience trauma, and without proper care, it can lead to mental health problems in adolescence and adulthood.

Manik Gadre is working to upskill the next generation of childcare workers in trauma-informed care. Source: TAFE NSW

Many of those affected come from refugee backgrounds and may have witnessed traumatising events, violence, or toxic levels of stress.

Australia welcomed 11 per cent of all resettled refugees in 2019 with an intake of just over 18,000 people.

Ms Gadre is now working to upskill the next generation of childcare workers in trauma-informed care at TAFE NSW to ensure they can better recognise and respond to trauma in children from refugee backgrounds.

“If we're looking at a scale of one to 10, one being not a big deal, 10 being it should be a mandatory requirement - like you can't drive without a license - I would say it's a 10,” she said.

“Because early childhood educators are the people in children's lives and in the family's life who see them many times a week.”

Half of all humanitarian arrivals to Australia are under the age of 18, with a high proportion of them being young children.

Of those who migrate to New South Wales, three-quarters initially settle in Western Sydney, all the more reason, says Ms Gadre, to be running the course there and recognise the unique needs of that community.

She said when teachers use a trauma-informed approach they can identify signs of trauma and learn how something as simple as a loud noise or a fast movement could trigger a negative response from a child.

“A lot of time we may not be aware, for example, if there's an ambulance on the street now, and there's a siren and the child might relate that to a wartime siren … that might trigger the child and they might show some unusual behaviour as they try to keep themselves safe.”

CEO of the Australian Childhood Foundation Dr Joe Tucci says it is vital early childcare workers are taught how to identify whether a child may be experiencing trauma.

“As a community we have a lot of myths that tell us that if children don't see or hear violence, that somehow they're not affected by it, and that's not the case,” he said.

“We've really got to identify early childhood trauma, and we've got to be able to know how to address it in order to prevent these problems that emerge over time.”

Dr Tucci said trauma manifests differently in young children compared to adolescents and adults. Some of the signs include being socially detached, having trouble eating or sleeping, hyperactivity and a lack of responsiveness.

Dr Tucci said if it is not addressed early, the effects “continue to compound over time” and can lead to dificulty making friends, focussing in the classroom as an adolescent, to depression and suicidal thoughts in adulthood.

TAFE NSW graduate Ebenezer Akomeng, who is now working as an early childhood educator for Woodville Alliance in Western Sydney, said working with refugee children who may have experienced trauma has its challenges.

“They might be very scared because they're not really used to such an environment, they're only used to their family, so it's a bit challenging,” he said.

Mr Akomeng teaches a diverse range of young children, many from migrant backgrounds, as well as some who came to Australia as refugees.

Originally from Ghana, Mr Akomeng said he is able to use his lived experience as a migrant to help better understand and help children who may be dealing with trauma.

Mr Akomeng used an example of one boy who was acting out in his classroom.

“The kid was from my background … [and] Africans have their kids on their back with a piece of cloth, it's one of the most soothing things to do for a kid,” he said.

“So after focusing his attention on me, I had him on my back and he felt calm, I took him away from the rest of the group … and once he felt okay, I slowly brought him back to the group.”

Sarita Shrestha is in her final year of TAFE and is passionate about making sure every child is supported.

“It’s really important to be vigilant of the signs and symptoms and then we can collaborate with other staff in the space, maybe families, and other support agencies to further help for the better outcomes of children,” she said.

The Nepalese-born teacher said one of the biggest challenges when working with a child from a refugee or migrant background is the language barriers.

When she can, she uses the languages she can speak - Nepali and Hindi - to communicate with certain children, but she has also learnt to use nonverbal communication.

"It's really important for early childhood educators to build that sense of trust and belonging and that connectedness with children," she said.

Ms Shrestha said even the smallest gesture can make a child, or a family, feel more comfortable, whether they are from refugee backgrounds or not.

“For the Chinese families, I learnt 'ni hao' (hello). Even that small word can make a big difference. The children can feel like they belong, they feel respected and even the families feel respected, so it's really important.”

Share
Published 20 June 2020 at 9:29am
By Amelia Dunn
Topics
Australia