A crackdown in China's Xinjang is focusing on halal products. 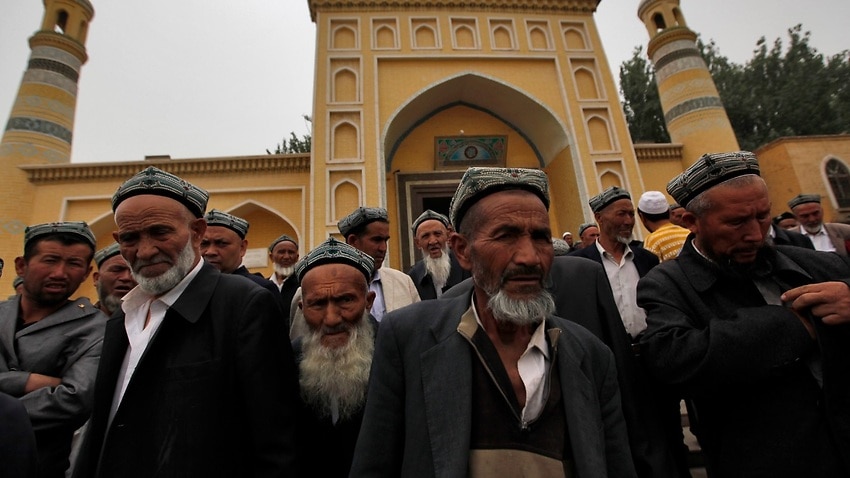 Chinese authorities have launched a campaign against halal products in the name of fighting extremism in the capital of Xinjiang, the fractious northwest region where Muslims are facing a raft of religious restrictions.

Beijing has in recent years launched a security crackdown in Xinjiang against what it calls separatist elements, and a UN report has cited estimates that up to one million ethnic Uighurs and other Muslim minorities are held in extra-judicial, political re-education camps.

Halal -- Arabic for "permissible" -- refers to a set of rules guiding Muslims on what is allowed according to the religion. It is frequently applied to food and drinks but also includes other personal hygiene products like toothpaste and cosmetics.

Communist Party leaders in Urumqi, the regional capital, on Monday led cadres in swearing an oath to fight the "pan-halal trend to the end".

An African Muslim, center, kneels and bows among Chinese Muslims as they attend an Eid al-Fitr morning prayer Source: AAP

"My belief is Marxism-Leninism... I must fly the flag high and battle (the) 'pan-halal trend' to the end, resolute in my beliefs, even to death!" the oath reads.

Government officials should also not have dietary restrictions, the statement said, adding work canteens would be changed so officials can try "cuisines of various nationalities".

As part of the campaign, Urumqi's ethnically Uighur head prosecutor Ilshat Osman also wrote an essay titled: "Friend, you do not have to find a halal restaurant specially for me".

The state-run Global Times tabloid on Wednesday cited "experts" as saying that the "pan-halal" tendency blurs the boundary between religion and secular life, making it easy to "fall into the mire of religious extremism".

Uighurs and other Muslim minorities are subject to strict regulations banning beards and burqas, and many have been detained in re-education camps for offences as minor as making contact with family members outside the country or sharing Islamic holiday greetings on social media, a UN report said in August.

Beijing has denied reports of the camps but evidence is mounting in the form of government documents and testimonies from former detainees.