China has promised to retaliate after the US abruptly ordered it to close its consulate in Houston within 72 hours, escalating tensions between the two nations. 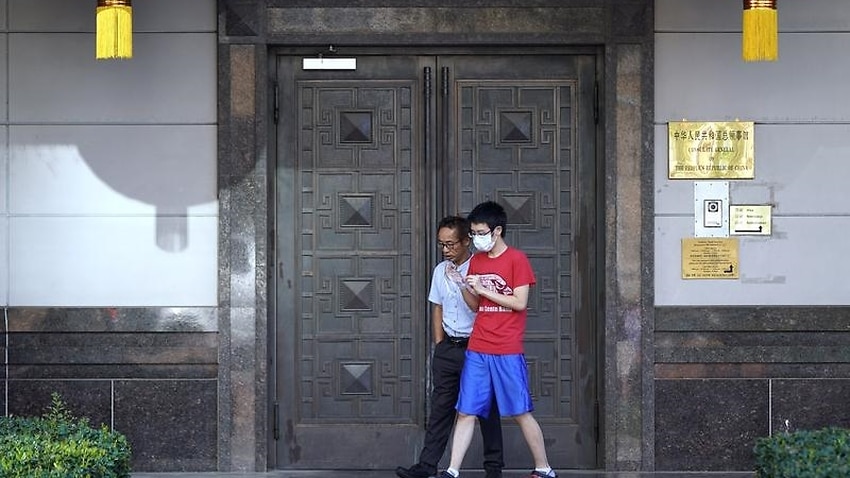 China has been ordered by the US to shut its consulate in Houston amid accusations of espionage. (AAP)

The United States has told China to close its consulate in Houston in a dramatic deterioration in ties between the world's two biggest economies.

Beijing is considering shutting the US consulate in Wuhan in retaliation, according to a source.

The editor of an official Chinese media outlet said China had been given just 72 hours to comply.

The US State Department said the move was made "to protect American intellectual property and Americans' private information".

Beijing condemned the order and threatened retaliation, but did not say what measures it might take.

The deterioration comes in the run-up to the November US presidential election, in which President Donald Trump and his Democratic rival Joe Biden have appeared to compete over who can look tougher in response to China.

Speaking on a visit to Denmark, US Secretary of State Mike Pompeo repeated accusations about Chinese theft of US and European intellectual property, which he said were costing "hundreds of thousands of jobs".

While offering no specifics about the Houston consulate, Pompeo referred to a US Justice Department indictment on Tuesday of two Chinese nationals over what it called a decade-long cyber espionage campaign that targeted defence contractors, COVID researchers and hundreds of other victims worldwide.

"President Trump has said enough - we are not going to allow this to continue to happen," Mr Pompeo told a news conference.

"That's the actions that you're seeing taken by President Trump, we'll continue to engage in this."

Republican Senator Marco Rubio, acting chairman of the Senate Intelligence Committee, went further - he said the consulate was the centre of a "massive spy operation".

The New York Times quoted the top US diplomat for East Asia, David Stilwell, as saying that the Houston consulate had been at the "epicentre" of the Chinese army's efforts to advance its warfare advantages by sending students to US universities.

"We took a practical step to prevent them from doing that," Mr Stilwell told the Times.

Mr Stilwell said China's consul general in Houston and two other diplomats had been caught engaging in questionable activity past the security check area at Houston airport while awaiting take-off of a charter flight to China.

He said the diplomats were escorting travellers to the gate area, and Air China had paperwork with false birth dates for the diplomats.

China's embassy in Washington did not immediately respond to a request for comment on those remarks.

Ties between the US and China have worsened significantly this year over a range of issues, from the coronavirus and telecoms equipment maker Huawei to China's territorial claims in the South China Sea and its imposition of a new security law on the former British colony Hong Kong.

Late on Tuesday in Houston, firefighters went to the consulate after smoke was seen.

Two US government officials said they had information that documents were being burned.