The country does not include COVID-19 patients who are not showing symptoms in their overall tally, despite evidence they can still spread the virus. 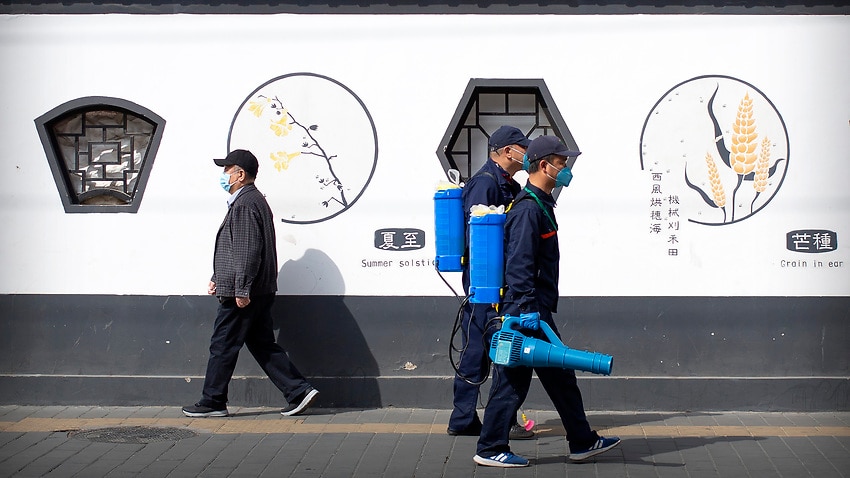 China has reported more than 1,300 asymptomatic coronavirus cases, the first time it has released such data following public concern over people who have tested positive but are not showing symptoms.

Health officials also reported the first imported case from abroad in Wuhan - the epicentre where the virus first emerged late last year - heightening fears of infections being brought into China from other countries.

Of 36 new cases reported Wednesday, 35 were imported from abroad.

The National Health Commission (NHC) said 1,367 asymptomatic patients were under medical observation, with 130 new cases added in the last day.

A worker in a protective outfit checks the body temperature of a woman at the entrance of a bank in Wuhan, China. Source: EPA

The NHC announced Tuesday that it would respond "to public concerns" by starting to publish daily data on asymptomatic cases, which it said were infectious.

There were mass calls online calls for the information after authorities revealed over the weekend that an infected woman in Henan province had been in close contact with three asymptomatic cases.

Asymptomatic cases will not be added to the overall tally unless they later show clinical symptoms.

Many on social media said they were terrified of the high number of asymptomatic carriers, and some called for health officials to break down the data by province.

"It's absolutely necessary to report the whereabouts of asymptomatic cases, they're like stealth carriers, it's scary," read one popular comment.

Experts agree that asymptomatic patients are likely to be infectious, but it remains unknown how responsible they are for spreading the deadly virus.

Beijing has announced a series of dramatic measures to control imported cases - including testing people arriving from overseas - to determine those who are infected but do not show symptoms.

Many other countries including South Korea and Japan count asymptomatic cases in their national tallies of confirmed diagnoses.

There have now been 81,554 infections in China, with 3,312 deaths - mostly concentrated in the epicentre of Wuhan and surrounding Hubei province.

There were seven more deaths on Wednesday, six in Hubei province.

The first imported case confirmed in Wuhan on Wednesday was a Chinese national studying in Britain, who arrived in the city last week as it started to gradually lift travel restrictions imposed to control the outbreak.