China's smoggiest city closed schools as much of the country suffered its sixth day under an oppressive haze, sparking public anger about the slow response to the threat to children's health.

Since Friday a choking miasma has covered a large swathe of northeastern China, leaving more than 460 million gasping for breath.

Shijiazhuang, the capital of Hebei province, was one of more than 20 cities which went on red alert Friday evening, triggering an emergency plan to reduce pollution by shutting  polluting factories and taking cars off the road, among other measures.

Nowhere has been hit as hard as Shijiazhuang, which has seen a huge rise in pollution.

But the city's education department waited until Tuesday evening to announce it was closing elementary schools and kindergartens, following similar moves in nearby Beijing and Tianjin.

The announcement said middle and high schools could close on a voluntary basis. 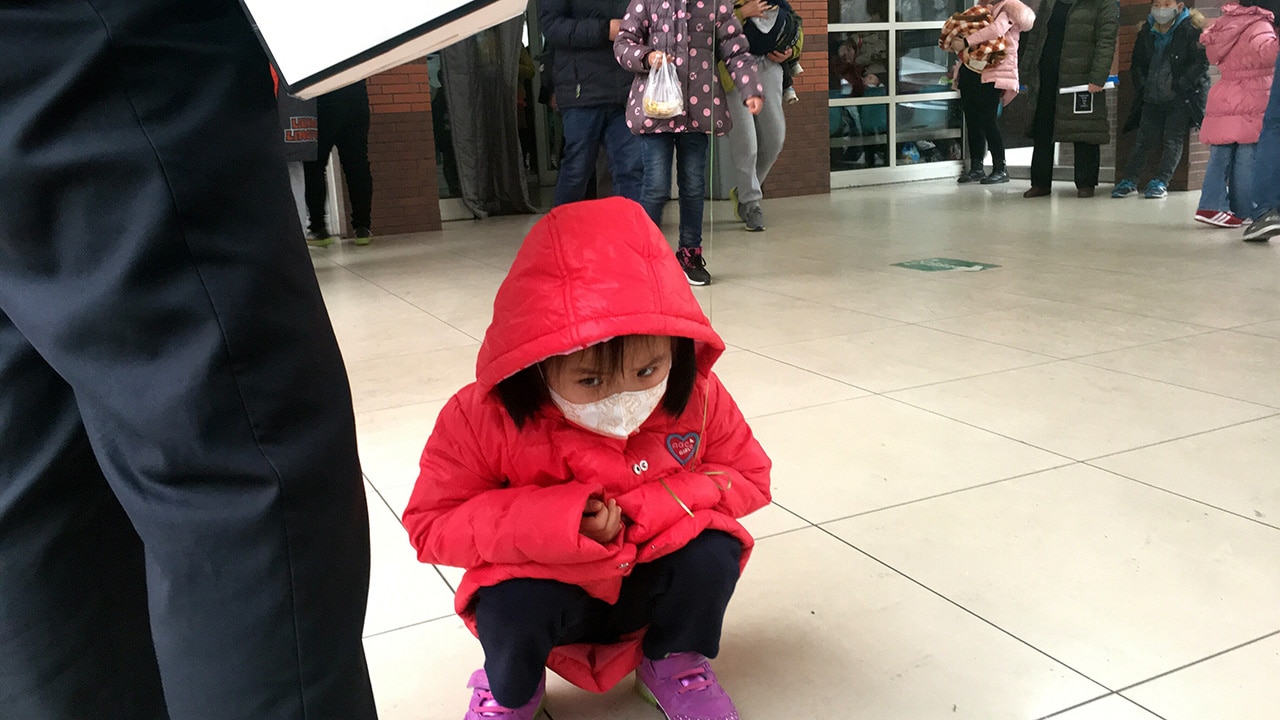 An ill young girl wearing a face mask squats on the floor at a hospital in heavy smog in Beijing, China, 21 December 2016. (AAP)
Imaginechina

"Are middle school students' bodies' air purifiers?" one incredulous commentator asked, adding: "Are you going to wait for us all to become sick before you step up to fix this?"

A picture from neighbouring Henan province, showing more than 400 students sitting an exam on a football pitch after their school was forced to close, was widely circulated on social media and further fuelled discontent.

The streets of Shijiazhuang, population 10.7 million, reeked of coal smoke Wednesday as pedestrians and cyclists flitted through a thick grey haze that reduced buildings to gauzy silhouettes.

Only a handful wore the white disposable masks that have become increasingly common in Beijing since the government issued its first-ever red alert last December.

"I don't like this pollution but I have to work," street sweeper Dong Xiai, 44, told AFP, adding his workmates do not wear masks because the city does not provide them.

Shijiazhuang has seen 10 bouts of serious air pollution so far this winter, according to the China Daily newspaper, putting it top of the environment ministry's list of cities with the worst air quality.

Over the last 48 hours, levels of PM 10 -- a measure of particulates in the atmosphere -- have been literally off the charts in the city, repeatedly maxing out at 999.

Levels of the smaller PM 2.5 particles, tiny enough to be absorbed into the bloodstream and thought to be a major contributor to respiratory and cardiovascular disease, reached as high as 733, more than 29 times the World Health Organization's daily recommended maximum of 25.

The industrial city is known for its pharmaceutical and textiles industries, both major sources of pollution.

But the likely explanation for the choking haze are steel mills and coal mines in the surrounding province of Hebei.

Last month the environment ministry said pollution had worsened in October over the same period last year, despite a generally positive trend in air quality.

And the problem may continue to worsen, according to a paper issued over the weekend by Greenpeace, which said that data and forecasts suggest that "December will continue the trend of stagnating or worsening air quality".

An article in the China Daily  linked the increasing haze to rising steel prices.

Government attempts to curb pollution by closing steel mills and imposing emission restrictions have driven up steel prices, the article quoted an expert on the industry as saying.

Ironically, that has incentivised the remaining steel producers to make more of the product.

Shijiazhuang's smog and its government's reticence to act have tested the patience of not just the public but even state media.

On Tuesday the official Xinhua news agency published an article scolding officials in the city for waiting to cancel schools even though smog was "off the charts".

"If (officials) turn a deaf ear or act indifferent, and the people, especially minors, are exposed to potential health risks, this is undoubtedly a dereliction of duty," it said.

But one father at least said he was glad of the smog because it gave him the chance to take his 10-year-old son to work.

Afterwards, he said, "we went to the mall to buy some toys".