More than 200 Australians suffering from vascular dementia are set to take part in Australia’s largest trial of Chinese herbal medicine.

Researchers from the National Institute of Complementary Medicine at the University of Western Sydney, today launched the final phase of a clinical trial into a herbal remedy known as Sailuotong (SLT), after pilot studies found the product could improve the memory and cognitive function of dementia patients.

“We are looking at some medication which can slow down the progression and improve the quality of life of patients.” One in three may develop dementia: study

More than 340,000 Australians are living with dementia, with a new case diagnosed every six minutes.

Behind Alzheimers, vascular dementia is the second most common form of dementia, often characterised by mini strokes, however there is no cure or any approved medication for patients to take.

“We are looking into potentially, one of the early  approved medications for vascular dementia,” Associate Professor Chang said.

Sailuotong is a pill made up of a complex combination of ginko, ginseng and saffron.

“We are not simply throwing those three herbs into a pot and boil and drinking them,” Chang said.

“There is lots of science behind that… We use different methods to bring out the so called bioactive components of them,” he added.

The $3-million study is a joint project with the Xiyuan Hospital and the China Academy of Chinese Medical Sciences in Beijing.

The Australian study will be followed by a second major trial in China.

“If the two trials prove to be successful or to be effective then the next phase would be to look into registration (of the product) with a regulatory body such as the Therapeutic Goods Administration,” Associate Professor Chang said.

Today’s launch of the clinical trial, involving 230 patients at the University of Western Sydney’s Campbelltown campus, was attended by Chinese Government delegates.

The director of the National Institute of Complementary Medicine, Professor Alan Bensoussan, said the recognition from the Chinese authorities was extraordinary, and showed the importance of the trial.

“What you’ve got is a recognition at state level of the kind of research that we’re doing,” Professor Bensoussan said.

He said the pilot studies had been promising.

“All the signs are very positive in terms of the potential [of the herbal remedy] to impact on a number of areas including improving blood flow to the brain which is one of the contributors to vascular dementia,” Professor Bensoussan said.

Burt Lancaster, 70, who suffers from vascular dementia, welcomed news of the trial.

“It would be great to be able to remember things…I’d love it,  I would, as far as my memory goes, I really would love it,” Mr Lancaster said.

Mr Lancaster’s wife Margaret noticed his memory was failing him two years ago, and said her husband is now completely reliant on her.

“The other morning he got up and said he didn’t know where he was…every day it’s getting worse,” Mrs Lancaster said.

Mrs Lancaster said while the physical strain was one thing, the social impact of the disease could also be devastating. 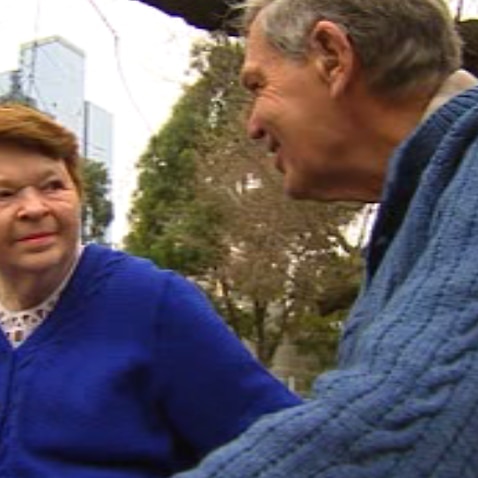 “People avoid you, they avoid you with this complaint,” she said.

Vascular dementia patients will first be recruited for the trial from five hospitals in New South Wales, and later in Melbourne, Brisbane, Adelaide and Perth.

The group will be separated into two trial groups, with one receiving the active ingredients and the other put on a placebo for a period of one year.