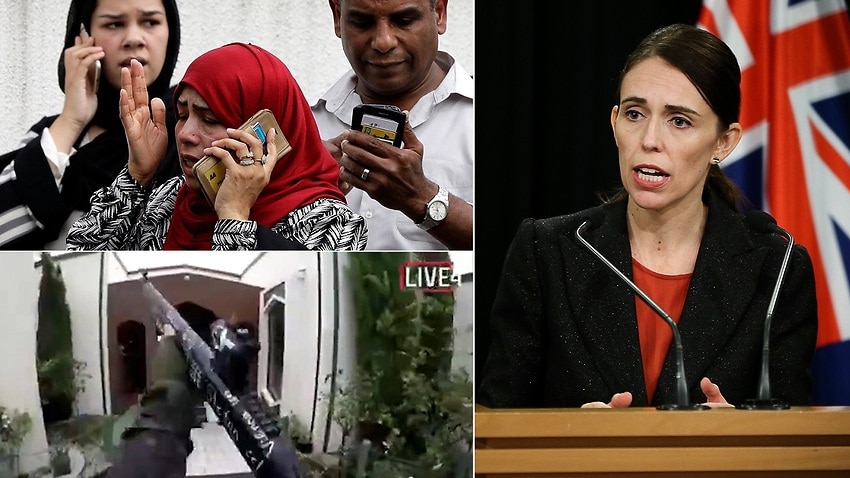 Forty-nine people have been killed and four people arrested, including one Australian, after a gunman opened fire at two mosques in Christchurch on Friday.

New Zealand Police Commissioner Mike Bush confirmed 41 people lost their lives at the Al Noor mosque, seven died at the Linwood site and one passed away at Christchurch hospital. There are 48 people who remain in hospital.

Mr Bush said one person has been charged with murder and will appear in the Christchurch Court on Saturday.

Police have also said they are investigating a house in Dunedin in relation to the attacks.

2/2 Alternative accommodation has been provided for residents
requiring it and cordons are in place in the Somerville Street and Everton Road
area.

There is no further information available at this time.

Speaking from Wellington on Friday evening, New Zealand Prime Minister Jacinda Ardern said "it is clear that this can now only be described as a terrorist attack", before travelling to Christchurch on Saturday.

"These are people who I would describe as having extremist views, that have absolutely no place in New Zealand, and in fact have no place in the world."

She told New Zealanders they were not chosen for this act of violence because they condone racism but because they represent diversity, kindness, compassion and a refuge for those who need it.

"And those values I can assure you will not and cannot be shaken by this attack," she said.

"You may have chosen us, but we utterly reject and condemn you," she said of the extremist attackers, none of whom were on a security watchlist.

Vigils and services were held around the world on Friday.

Hundreds of people gathered at Lakemba mosque in Sydney, including several state and federal politicians.

"We value our freedoms in Australia. We value our religious freedoms. One of the great things about our nation is that everyone can practise their religious beliefs, and they should always be able to do so in an environment of peace and tolerance," he said.

Labor MP Tony Burke told those gathered, "don't let anyone tell you, you are less than being full, important, essential leaders of Australian society".

A mother and daughter came tonight to lay flowers at Lakemba Mosque, to pay their respects and give support to the Muslim community. The gathering stopped, and clapped. These flowers are from all of us to those affected by acts of hate, and rhetoric which divides and demonises pic.twitter.com/bvmAWp3z1S

Solidarity between people of all faiths and none at Lakemba Mosque tonight. When hatred rears its head, we must stand together to ensure that humanity always wins out. pic.twitter.com/Wtyzskbzqn

The shooting was live-streamed by the alleged gunman, who identified himself as Australian-born, 28-year-old "Brenton Tarrant".

The video shows the shooter driving to the mosque, before walking up to the entrance, where he begins shooting randomly at worshippers.

After a barrage of shots, he leaves the mosque and runs outside, shooting at people on the street.

Mr Bush said police were aware of the "very disturbing" footage and were trying to remove it from the public domain.

In a 74-page manifesto setting out the reasons for the attack, reportedly authored by the shooter, he further described himself as "just an ordinary white man, 28 years old. Born in Australia to a working class, low income family".

In the manifesto, seen by SBS News, the man who identifies as Brenton Tarrant said he "only arrived in New Zealand to live temporarily whilst I planned and trained" but then decided to carry out an attack there.

The author does not mention how long or where he lived in Australia, but AAP is reporting he grew up in Grafton, NSW.

Police escort witnesses away from a mosque in central Christchurch. Source: AAP

He added that the manifesto reminded him of Norweigan terrorist Anders Behring Breivik.

'An unprecedented act of violence': Ardern

Ms Ardern, speaking from New Plymouth earlier on Friday, said it was "one of New Zealand's darkest days", describing the incidents as "an unprecedented act of violence".

A live stream of the attack showed a gunman entering the mosque and opening fire. Source: AAP

"The people who were the subject of this attack today, New Zealand is their home. They should be safe here," she said.

People wait outside a mosque in central Christchurch. Source: AAP

Australian Prime Minister Scott Morrison said he was shocked, outraged and appalled at the events in Christchurch, announcing that he had been in contact with Ms Ardern.

"We stand here and condemn absolutely the attack that occurred today by an extremist, right-wing, violent terrorist," he said.

Mr Morrison also confirmed that one of the people arrested over the attacks was an Australian citizen and that Australian authorities were involved in the investigation.

"I particularly want to express my sincere prayers and thoughts for those New Zealanders, indeed Australians of Islamic faith today, who have been the subject of this callous right-wing extremist attack," he said.

I'm horrified by the reports I’m following of the serious shooting in Christchurch, New Zealand. The situation is still unfolding but our thoughts and prayers are with our Kiwi cousins.

Meanwhile, opposition leader Bill Shorten urged people not to watch the footage of the attack.

Australia and New Zealand are family and we grieve with our brothers and sisters today. We send our love and condolences, our sorrow and solidarity in this terrible time of fear and pain and grief.

The Grand Mufti of Australia and New Zealand Ibrahim Abo Mohammed told SBS Arabic 24 that the incident reflected "the state of hate that some media reflect in its handling of the Muslims".

"An expert testified before parliament in 2016 that it was only a matter of time before a mass shooting occurred in New Zealand," he said.

Mr Wakefield, who was born in New Zealand, said the country had never seen attacks like this before.

"About 30 years ago we had an attack in a rural community in Aramoana but that was not, as this was, politically motivated and far fewer people died then," he told SBS News.

The Australian Security Intelligence Organisation (ASIO) did not wish to comment on the attacks.

'I saw some people drop dead'

A witness who was inside the Al Noor mosque told ABC News that it was very "peaceful, calm and quiet" when the shooting started.

Katherine Jamieson, who lives down the road from Al Noor mosque, told SBS News she saw bloodied victims in ambulances following the attack.

Witness describes the shooting as it happened in a Christchurch mosque

From lockdown, she said shaken survivors had told her how the shooting unfolded.

"They were devastated and terrified and I saw guys who were from the mosque covered in blood sitting in ambulances.”

Lisa Davies, in Christchurch, told the ABC "it's just a continuous stream of sirens".

"We've probably seen 10 ambulances. I've lost count of the number of police cars, but obviously all the police on these cordons are heavily armed and trying to keep the public out of the scene, keep them safe until they know exactly what's happened here, and that they've managed to apprehend the alleged gunman," she said.

Bangladesh team escaped from a mosque near Hagley Park where there were active shooters. They ran back through Hagley Park back to the Oval. pic.twitter.com/VtkqSrljjV

A nearby business owner told stuff.co.nz that a lot of people were praying at the mosque at the time of the incident.

"I heard 20 or more gunshots I thought something happened and the people were running on the other side of Deans Avenue and now I can see so many police," the business owner said.

Police attempt to clear people from outside a mosque. Source: AAP

One man said the scene at the mosque was chaotic.

"I heard a big sound of the gun. And a second one, I ran. Lots of people were sitting on the floor. I ran behind the mosque," he told TVNZ.

"The floor. There's lots of blood on the floor, you can see when you go in."

The man, who did not give his name said he saw four people on the floor but did not see the shooter.

Entire team got saved from active shooters!!! Frightening experience and please keep us in your prayers #christchurchMosqueAttack

Any Australian citizens who require consular assistance, or families concerned about the welfare of citizens should contact +6444736411 or +61262613305.