At a briefing with California officials, Donald Trump has suggested global warming will reverse itself. 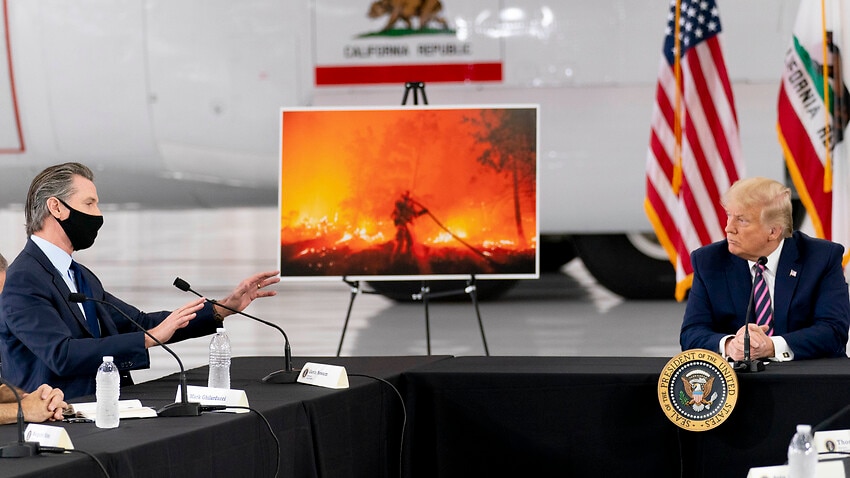 President Donald Trump on Monday suggested global warming will reverse itself and dismissed climate change as a cause of ferocious fires engulfing swaths of the US West during a briefing with local officials in California.

Mr Trump, who flew into Sacramento in central California on the third day of a reelection campaign swing, pushed back against state leaders who said that climate change underlies the ever-stronger blazes.

"It will start getting cooler. You just watch," he insisted to Wade Crowfoot, the head of the California Natural Resources Agency.

The official responded: "I wish science agreed with you."

Climate change is the existential challenge that will define our future as a country. Tune in as I discuss the wildfires up and down the West Coast — and how I'll tackle the climate crisis head-on and create millions of good-paying jobs: https://t.co/yMhodX8RYe

"If you give a climate arsonist four more years in the White House, why would anyone be surprised if we have more of America ablaze?" Mr Biden said, savaging Mr Trump for failing to "take responsibility" for the ongoing wildfire crisis in western US states.

"We need a president who respects science, who understands that the damage from climate change is already here," Mr Biden added, presenting the opportunity to battle global warming as a necessary choice for Americans.

"We can commit to doing this together, because we know that climate change is the existential challenge that is going to determine our future as a country," Mr Biden said, on the grounds of the Delaware Museum of Natural History.

"Or we can do it Donald Trump's way: ignore the facts, deny reality, which amounts to a full surrender and a failure to lead."

This was Mr Trump's first visit to California since the devastating blazes began there and in Washington and Oregon.

On arrival in McClellan Park, near Sacramento, Mr Trump repeated his argument that the wildfires are due instead to insufficient maintenance of forest areas to make them less combustible.

"There has to be strong forest management," the Republican said.

"With regard to the forests, when trees fall down after a short period of time, about 18 months, they become very dry. They become really like a match stick," he said. "They just explode."

But at the briefing, California Governor Gavin Newsom, a Democrat, countered that the fires are driven mostly by global warming.

Mr Newsom acknowledged that "we have not done justice on our forest management," though he pointed out that more than half of the land in California is under federal, not state control.

This is the packet @CAgovernor @GavinNewsom gave to @POTUS @realDonaldTrump for his briefing on California wildfires. pic.twitter.com/fEvTEWvW7h

But he said the overwhelming cause of the problem is far bigger.

"The hots are getting hotter, the dries are getting drier," he said. "We submit the science is in and observed evidence is self-evident: that climate change is real and that is exacerbating this."

After the briefing was over, Mr Crowfoot sought to get the last word, tweeting: "It actually won't get cooler, Mr. President" over a graph showing relentlessly rising temperatures in California since the 1980s.

Wildfires across Oregon, California and Washington state have destroyed thousands of homes and a half dozen small towns since August, scorching more than 1.6 million hectares and killing more than two dozen people.

Drone footage showed hundreds of homes reduced to ashes in the southern Oregon communities of Phoenix and Talent, around 8 km south of Medford last week, after a wind-driven firestorm raced north, blowing embers into trailer parks and residential subdivisions.