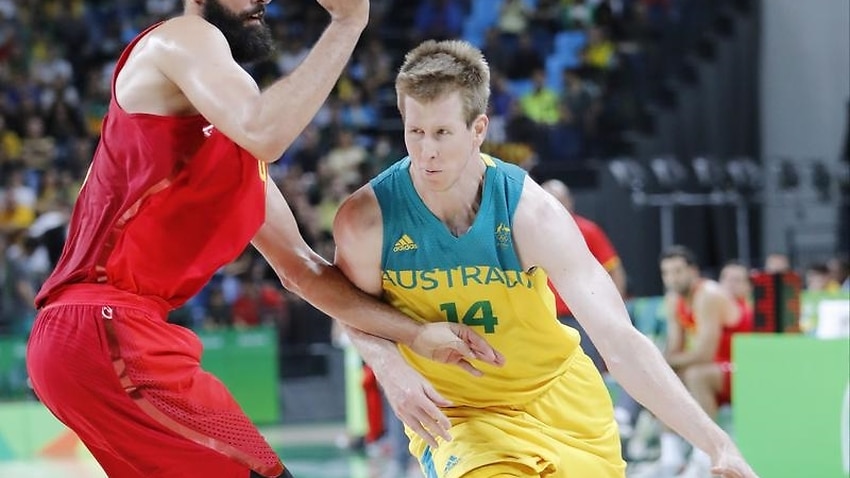 Brock Motum (r) knows time is running out for him to join his Boomers teammates in the NBA. (AAP)

Brock Motum can see it happening but admits time is running out to follow his Boomers teammates into the NBA.

The 27-year-old will return to Turkish club Anadolu Efes next month with a wedding ring on his finger and a solid fitness base after a busy two-month off season.

Married on Italy's Amalfi Coast last month, Motum has since been training with the NBL's Brisbane Bullets just a short drive from where he grew up.

"I'm playing with a great club in a great league but the goal is to get a good contract in the NBA and keep working in the top league in Europe until that happens," the forward told AAP.

"Hopefully I can get a shot in the next year, max two ... I know I really need to push for this coming year or the next."

The Rio Olympian has flirted with an NBA career before, playing in several summer leagues and signing a non-guaranteed contract with Utah in 2014 that was later waived.

But he is following a now-worn path after Olympic teammate Ryan Broekhoff, also 27, secured a contract with the Dallas Mavericks on the back of his brilliant form in Russia.

Joe Ingles went through Spain and Israel before announcing himself with the Utah Jazz, while fellow Australian forward Aron Baynes toiled in Lithuania, Germany, Greece and Slovenia before his break came with the San Antonio Spurs.

Motum has played in Italy, in the NBL with Adelaide and had two title-winning seasons in Lithuania, where he met his wife before a move to Turkey last season.

As many as 11 Australians could feature in the next NBA season.

"Yeah definitely (it gives you hope), but you have to be prepared when the chance comes and have a bit of luck too," he said.

"Right time, right place and then you weigh it all up."

Motum isn't likely to be available for Boomers selection due to his overseas commitments until the lead-up to next year's World Cup in China, when Australia will host a strong United States outfit in a Melbourne friendly.

"In the past we haven't had a strong team on paper but we made it up with heart and now we have the heart and on paper we can match with the other big teams," he said.