From a life of limited education opportunities in Afghanistan, Wahida Samim has become one of Australia's highest achieving university students.

It was the first time she had seen her father in years.

"It was like, I think, five or six years that I hadn't seen him and I didn't recognise my dad at all. I had seen pictures of him, I had heard stories of him," she told SBS News.

"People were always talking about how he would do this and he would do that. They would say you look exactly like your dad but I'm like I don't really know my dad, I have no idea what he looks like."

Ms Samim said her father had no other choice than to leave Afghanistan in search for a better life for his Hazara family.

In Afghanistan, the Hazara minority is persecuted and often pushed to live in remote parts of the country where there are fewer education opportunities for children.

"A lot of us were either forced to become slaves or servants or pushed to very remote central Afghanistan where it's very harsh terrain. From my memory, even now, a lot of Hazaras are not educated because of the fact they've been so isolated and they've been so disciminated against," she said.

Her father arrived in Australia by boat and spent seven months in detention before being granted a temporary visa.

Wahida was just eight-years-old when she arrived and even though she didn't speak English she managed to excel at school, continuing her education at university.

Now she's one of around 100 students chosen for next year's New Colombo plan intake.

The federal government-funded scholarship program will allow her to spend six months in Hong Kong during the final year of her commerce degree.

"Coming to university is kind of a big achievement because my mum never went to school and my dad couldn't finish his degree. So me being able to get the scholarship to go and study overseas is really, really big and I'm really privileged and really lucky." "It's about making young Australians more Asia literate, more aware of our place in the world. They'll come back after their experience with new perceptions and new perspectives, new ideas and new insights, and hopefully language skills," she told SBS News.

The original Colombo Plan saw thousands of Asian students study in Australia during the 1950s, including the father of Shadow Foreign Minister Penny Wong.

"It was life changing for dad. It gave him the opportunity to get a tertiary education. He was the first person in his family to finish school, let alone a person able to go to university," Ms Wong told SBS News.

It was also life changing for Ms Wong. Her parents met during her father's time in Australia.

"I wouldn't be here but for the Colombo Plan because of course dad met mum at the University of Adelaide and they were married and went back to Malaysia where I was born."

The New Colombo Plan is now a gateway for Australian students to study in 40 different countries in the Indo-Pacific region.

It has rapidly expanded in recent years to include internships with business giants like PwC and Deloitte.

"We're partnering with businesses and NGOs and even other governments to give our New Colombo Plan students an opportunity to actually work in their workplaces in another country. That's an extraordinary experience," Ms Bishop said. 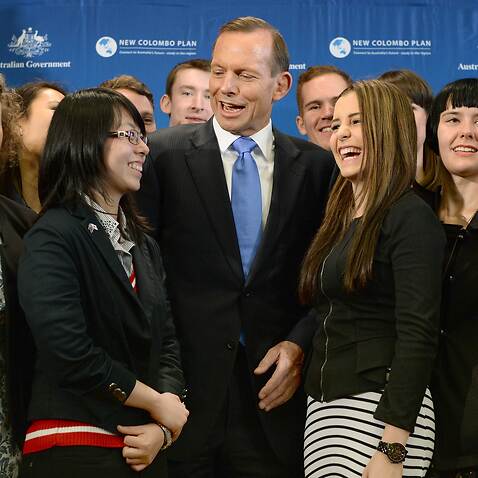 Comment: New Colombo Plan can change how we see Asia

"We have some remarkable young people. The future of our country is in good hands if the New Colombo Plan scholars are any mark of that."

But the program has not always had bipartisan support. Labor proposed a significant cut to its funding at the last election.

Ms Wong said she does think exposing Australians to the Indo-Pacific is highly valuable, and Labor will re-evaluate its position on the New Colombo Plan in the lead up to the next election.

"Increasing the capability of the Australian workforce in terms of knowledge of the region and better language understanding, these are all important economic and social priorities," she said.

For Ms Samim, her long-term goal is to work at the United Nations.

"I think that would be really interesting, (to) hopefully represent Australia and represent home, Afghanistan, as well," she sad.

"That is where my background is and I need to give back to all the people that are still left behind in Afghanistan."