Donald Trump’s immigration ban is straight out of the Australian playbook for treating asylum seekers - but it’s within our power to close that book, writes Ann Deslandes.

As promised, US President Donald Trump has ordered that refugees be banned from entering the country.

The ban is intended to protect Americans from terrorism. The apparent logic of the ban is that many people who seek asylum in the United States are from nations where the majority of people are Muslim. At the same time, people of the Muslim faith constitute the majority of terrorists. As such, banning all refugees from entering the States is a likely effective measure to prevent a terrorist attack on Americans.

President Trump’s ban, like his parallel act of banning travellers from specific nations with a Muslim majority, is formulated from the calculation Muslim = terrorist. This is a calculation comprised of extremely imprecise categories and has no basis in evidence.

It forms the basis of Islamophobia, a racist ideology and practice whereby Muslim people are pre-judged as a danger to western society and accordingly treated with hatred and violence. Right now, Islamophobia is threatening, injuring, curtailing and ending the lives of Muslim people across the globe.

Just this week, six people were killed and eight wounded, apparently by a white nationalist, whilst worshipping at their mosque in Quebec. Australians who like equality and social justice, and who know the modern European history of prejudice becoming genocide, are rightfully horrified about President Trump’s executive exercise of such prejudice. We are also rightfully fearful for the fates of those who are now banned from crossing the United States border.

This week has brought reports of individuals being escorted off airplanes; others detained for hours, questioned about their political views and being denied medical care; of families suddenly separated.

I’ve been watching people in my social media feeds first register the shock and awe of the ban’s immediate implementation, and then the celebratory compliance of Australian political leaders on the same subject. None other than Prime Minister Malcolm Turnbull suggested that President Trump’s immigration ban would “emulate what we’re [Australians] doing” in the realm of border control. To be sure, currently before the Australian Parliament is a Bill, introduced by Prime Minister Turnbull’s Minister for Border Protection, Peter Dutton, which would ban all asylum seekers and refugees who arrived to Australia by boat from entering Australia at any point in their lifetime.

The Migration Legislation Amendment (Regional Processing Cohort) Bill 2016 has already passed in the Lower House. Like Trump’s travel ban, Australia’s would be based on a shady formula: refugee who arrives by boat = illegal (not a ‘real’ refugee).

The prejudice implicit in this formula is well-worn by Australia, and has resulted in the mass internment without trial or conviction of people seeking safety from poverty, discrimination, violence, and war. The vast majority of those imprisoned are people of colour.

The conditions and consequences of their imprisonment are very well-known. Just last month, Sudanese man Faysal Ishak Ahmed died following six months of untreated illness in Australian-run detention on Manus Island, where he had been held since fleeing violence in Sudan in 2013.

The proposed lifetime ban on refugees entering Australia would further extend and entrench this authoritarian exercise of power over people of colour.

In the words of Australia’s refugee-run refugee advocacy organisation RISE, who are leading the #BlockTheBill campaign: “People who have fled war, trauma and torture need long-term security in order to restore their lives. The proposed legislation adds major uncertainty to the lives of asylum seekers who have fled persecution and in turn exacerbates the trauma they have endured and continue to live through.”

Further: “Australia has a history of racism and genocide. Far-right wing sentiments are reappearing fast. It is up to us to not repeat the abhorrent acts that Australia was built on.” 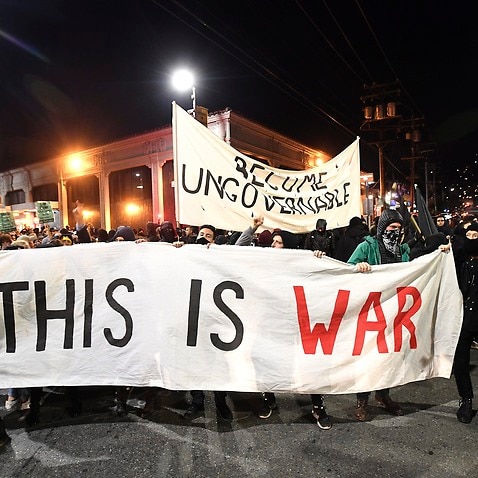 That is to say: unlike Trump’s effective-immediately executive order, this Australian ban is still a proposal. The Bill will be debated by the Senate in the coming months. And, there are six senators who are undecided on their position: Derryn Hinch, David Leyonhjelm, Jacqui Lambie, Skye Kakoschke-Moore, and Sterling Griff. They must be urged to vote against banning refugees from Australia.

As with a number of far-right policy ideas being advanced in Europe, there’s little question that Trump’s ban on Muslims travelling or migrating to the US is taken out of the Australian playbook for detaining and abusing asylum seekers in the name of secure national borders.

It’s within our power to close that book. Resisting Trumpism begins at home - #BlockTheBill. Comment: South Australia's always led the way on progress. Why not follow their lead on renewable energy? Explainer: what are executive orders? And what force do they have in US politics?