Protests have continued for a second day outside a Melbourne hotel after it was announced the asylum seekers would soon be moved to an unknown location. 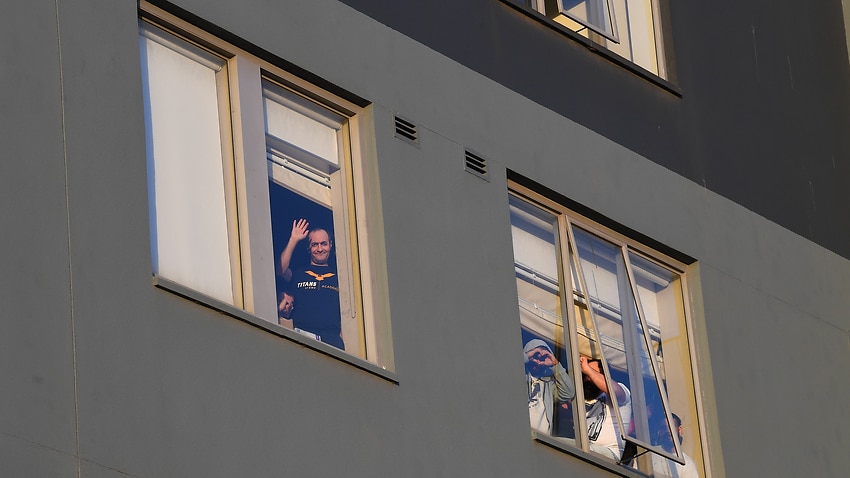 Detainees are seen through a window of the Mantra Hotel during a candlelight vigil in Preston, Melbourne, last week. Source: AAP

About 60 asylum seekers currently detained in a Melbourne hotel are facing an uncertain future after they were informed they would soon be moved to an unknown location.

The Mantra Bell City hotel, in the northern Melbourne suburb of Preston, has been used as a makeshift immigration detention centre to house asylum seekers who arrived in Australia under the now-repealed Medevac laws.

Detainees were informed in a meeting on Monday that they would soon be moved to a new location, with the Department of Home Affairs confirming the contract with the hotel was coming to an end.

Advocates have described the timing of the announcement as "very unfortunate".

A handful of asylum seekers were granted visas and released from detention last week ahead of legal bids to have them freed.

Protesters outside the Mantra hotel in Preston on Monday. Source: AAP

"The Department of Home Affairs knew for a long time that this lease with the Mantra was coming to an end, then the events of last week obviously gave the men some encouragement that they too would be released," said Alison Battinsson, the director principal of Human Rights for All, who is representing some of the men in the hotel.

"Instead of telling the gentleman that they are going to be moved to another place of detention - that hasn't been disclosed to them - the more sensible approach would be to release them as per the law."

She said the uncertainty around where the detainees would be moved to, and whether the approximately 60 men would be kept together, has had "devastating" consequences on their mental health.

"We often get very distressed calls from our clients very early in the morning, like 2am or 4am, saying 'they've come, they've handcuffed me, they've told me I'm moving somewhere'," she said.

"And what's so distressing is that they don't know if they're moving to someone else in Australia or Christmas Island, or if they're being sent back to their countries where they face harm."

Protesters gathered outside the hotel on Tuesday for the second day of demonstrations.

"The move from one hotel-prison to another is an unnecessary act of cruelty that could further damage men suffering from mental distress after more than seven years in detention," David Glanz, from the Refugee Action Collective, said in a statement.

"These men are refugees who were brought here under the Medevac Act for medical treatment. But instead of providing care, the government has locked them up, two to a room, for 23 hours a day without access to fresh air."

A Department of Home Affairs spokesperson told SBS News the new location would be in Melbourne, but would not provide further details of the location or the timing of the transfer - citing operational and security reasons.

More than 180 refugees and asylum seekers are believed to be currently held in hotels in Brisbane and Melbourne after coming to Australia from Manus Island and Nauru for medical treatment. The government refers to the hotels as "alternative places of detention" or APODs.

Under Australia's current immigration policy, introduced in 2013, anyone who attempts to come to Australia by boat will not be permitted to settle permanently, even if they are found to be genuine refugees.

"Transitory people are encouraged to finalise their medical treatment in Australia so they can continue on their resettlement pathway to the United States, return to Nauru or Papua New Guinea, or for those who are not refugees, return to their home country," the Department of Home Affairs spokesperson said.

"In line with Australian government policy, no one under regional processing arrangements will be settled in Australia."