Australia's consumer watchdog names and shames the products that it believes are taking advantage of consumers in its 12th annual Shonky awards.

Choice revealed eight products or services on Thursday at the 2017 Shonkys that it judged has been accused of poor performance from consumers.

Choice Chief Executive Alan Kirkland said the awards are designed to help companies perform better for the benefit of the Australian consumer.

“Whether it’s for targeting the unborn with a poor value savings account, financially exploiting those in pain or chipping away at kids’ teeth with dodgy vitamin products, this year’s winners deserve their awards,” says Mr Kirkland.

Here are the eight awards listed on Choice's website for 2017:

Choice reported it took the washer 6.5 hours to "complete a cycle and used 149 litres of fresh drinking water to remove three litres of water from our 3.5kg test load".

Viagogo might be a popular ticket site for scalpers and buyers, but Choice said drip pricing, tricky tactics and failing to respond to consumer complaints created confusion among buyers.

Choice gave Viagogo the Shonky for "ripping you off with dodgy practices." 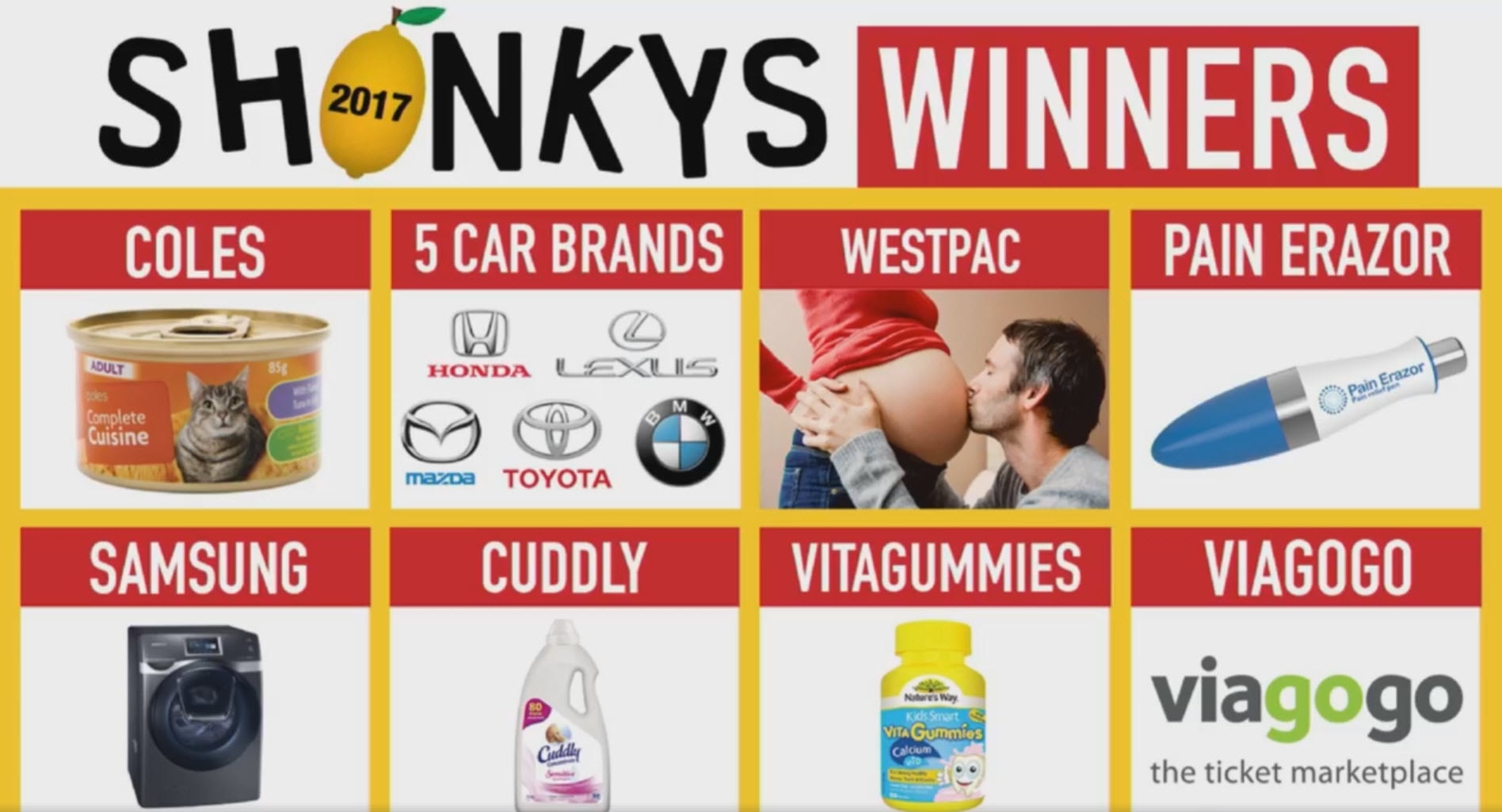 The Shonky winners for 2017.
Choice

Choice gave these five manufacturers Shonky status for failing to notify consumers about the risks they face when it came to Takata airbags.

Nature's Way colourful gummies for children are claimed to be good for teeth, but Choice claimed they are "sugary treats" that "could cause tooth decay".

Choice found Westpac's Bump Savings account had a "poor" 2.30 per cent interest rate and customers had to wait 16 years before touching the money. Choice judged the fabric softener performed worse than wate,  and the product received the lowest score in its test.

The Shonky award went to the Complete Cuisine cat food from Coles for its name.

Despite being named 'Complete', tiny font on the back of the can claims the food is incomplete when it came to delivering nutritional value for your pets, according to Choice.

Coles said this specific label has since been relabelled.

Finally, ads for the Pain Erazor claim it offers pain relief through electrical currents on the skin. However, Choice found the pen is "unlikely to be beneficial for pain" and is probably good for lighting your stove top.

Mr Kirkland said the Shonky Awards will be back to find potential Shonky products and services next year.

“Unfortunately each year the Awards go from strength to strength as companies continue to serve up poor value, hidden charges and questionable claims. Sadly, it looks like we’ll be back again in 2018.

“For those eight companies that sank to the bottom in this year’s Awards, they now have an opportunity to follow the lead of previous recipients such as Ikea and Qantas and clean up their act.”

SBS World News has reached out to all companies for comment.

A Wespact spokesperson told SBS World News: "Westpac’s Bump Savings account has been designed to help kickstart savings for the next generation and encourage savings habits. The headline interest rate is a competitive 2.3% p.a. and there are no transaction or monthly service fees."

"The Bump account’s base rate is the highest amongst the Big 4 and one of the highest in the market for children’s accounts."

"Coles is committed to providing clear and accurate information to our customers about our product range," a spokesperson told SBS World News.

"Coles commenced relabelling this product over a year ago. The label on the back of the product always stated that the product should be fed with dry cat food for a complete meal. However, our relabelling process involved removing “complete” from the label to help reinforce that this product is a complementary food.”