The Australians who were evacuated from the cruise ship Diamond Princess have flown home after spending 14 days in isolation at a camp near Darwin. 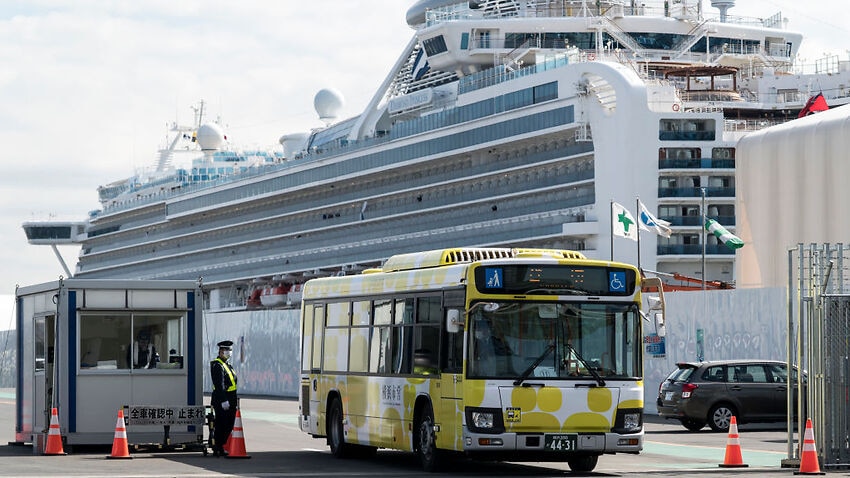 Australians evacuated from a coronavirus-hit cruise ship off Japan have been allowed to go home after 45 days away, including more than a month in quarantine.

The evacuees say they had to reintroduce themselves again on Thursday when they were allowed to take off their masks for the first time and did not recognise their fellow passengers.

Australian evacuees from the coronavirus-struck cruise ship Diamond Princess have been allowed out of quarantine. Source: AAP

Of more than 3,700 passengers and crew on the Diamond Princess cruise ship, about 620 became infected with COVID-19 by 19 February, around the time more than 160 Australians were evacuated after 18 days in quarantine on the ship.

Couple Chris Peck and Vicki Presland say it was deflating after being evacuated by the federal government when they were told they would have to be in quarantine for another two weeks in Darwin after 18 days on the ship.

"It took about an hour for me to get my brain into gear, then you go for it, put one foot in front of the other," Ms Presland said.

Quarantine in Darwin was better than being confined to cabins on the cruise ship, the couple said, because people were able to go outside a little, albeit in the Top End's hot, humid wet season.

They could participate in swimming, trivia and bingo, but in a highly restricted way.

"You had to wait your turn. We got to go in the pool three times in the whole two weeks for an hour," Ms Presland said.

Ken and Mytran Donnelly were sad to have missed the birth of their first grandson during their quarantine but grateful to be going home "happy and healthy".

"We thought the government could have brought us home earlier but you can't be angry at the world, you have got to get on with life," Mr Donnelly said.

Both couples praised the teams of workers who had been responsible for them at a workers camp at Howard Springs, including Australian Medical Assistance Teams, the Australian Border Force and others.

"Their personalities were amazing and uplifting," Ms Presland said.

Among the group was WA man James Kwan, 78, the first Australian to die from the coronavirus.

In total, 10 people tested positive to the coronavirus while quarantined at Howard Springs.

The evacuees were the second group of Australians to be evacuated to the camp for quarantine after a group from the epicentre of the virus, Wuhan in China.