It was "fear, pure fear" as a man with a knife stabbed three people at a railway station in Manchester, England, by a man shouting "Allah". 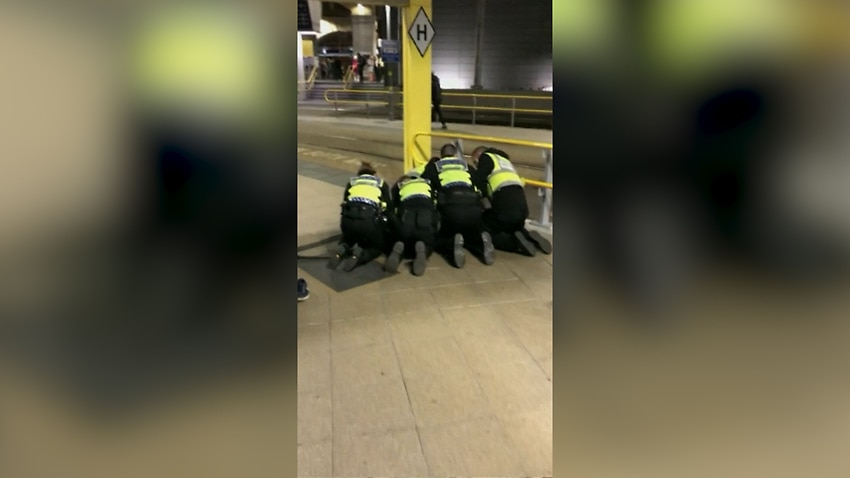 British counter-terrorism police are leading an investigation after a knifeman stabbed three people at a central railway station in Manchester, England.

Two commuters - a man and woman in their 50s - were taken to hospital with knife injuries and a British Transport Police officer was stabbed in the shoulder.

An eyewitness to the attack, which occurred at Victoria Station around 9pm on New Year's Eve, said they heard the assailant shout "Allah" during the incident.

Police said a man was arrested on suspicion of attempted murder and remains in custody.

Assistant Chief Constable Rob Potts said the investigation was being led by counter-terrorism police and officers were keeping an "open mind".

He said: "Tonight's events will have understandably worried people but I need to stress that the incident is not ongoing, a man is in custody and there is currently no intelligence to suggest that there is any wider threat at this time."

Sam Clack, a BBC producer, was on a platform at Manchester Victoria railway station waiting for a tram home when he witnessed the attack.

The 38-year-old said: "I just heard this most blood-curdling scream and looked down the platform.

"What it looked like was a guy in his 60s with a woman of similar age and another guy all dressed in black.

"It looked like they were having a fight but she was screaming in this blood-curdling way.

"I saw police in high-vis come towards him.

"He came towards me. I looked down and saw he had a kitchen knife with a black handle with a good, 12-inch blade.

Another awful stabbing at Manchester. Thoughts are with the people. On what should be a night of new beginnings. Is just the same with complete lawlessness on our streets. Make you not want to venture out your own doors. #killing #stabbing #manchester. #nye

"It was just fear, pure fear."

Clack said police officers used a Taser and pepper spray before "six or seven" officers jumped on the man and held him down.

He said he heard the suspect saying: "As long as you keep bombing other countries this sort of s*** is going to keep happening."

Clack said it looked like both the man in his 60s and the woman with him had been stabbed, but both were conscious and were walked to a waiting ambulance.

He said he also heard the knifeman shouting "Allah" during the attack.

So sad to hear what's happened in #ManchesterVictoria #stabbing this evening. Can not believe we are ending #2018inReview like this. When will it stop?

As police appeared "within seconds" the knifeman backed down the platform towards where he was standing alone. Clack was afraid the man would attack him.

"I just had a feeling in the pit of my stomach," he said.

"Here's a man who's very agitated, angry, skittish. It appears he had already attacked someone. He had police coming towards him and he's coming towards me.

"I thought what I need to do is jump onto the tracks because next thing he's going to do is turn around and stab me. He's looking about, side to side and jumpy.

"At one point one of the police officers fired the Taser but it missed him.

"Then he got pepper sprayed and tasered and he want to the ground.

"It was scary. I have never been so scared in my life."