COVID-19: Indigenous Australians in the Top End are being offered free transport to return to country

Amid fears over the spread of coronavirus, an initiative in the Top End is helping First Nations people reunite with their families. 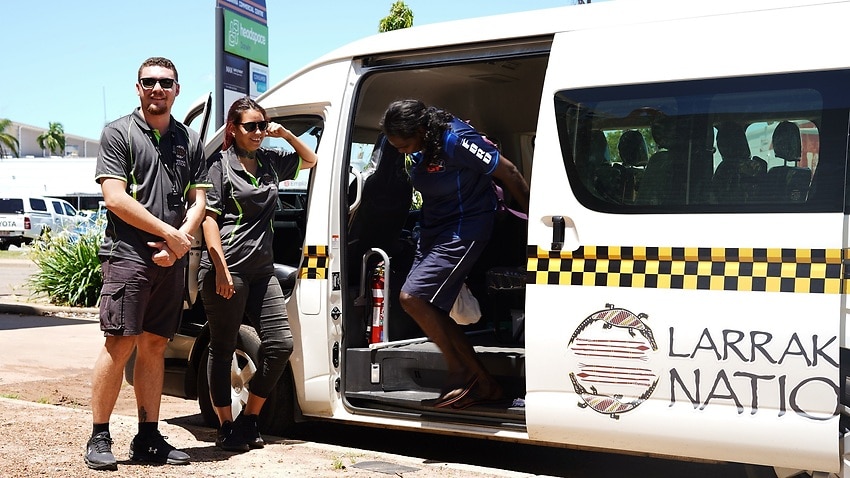 All non-essential travel to remote indigenous communities has been suspended by land councils across the Territory. Source: Aneeta Bhole

As coronavirus containment measures intensify across the Northern Territory, free transportation is being offered to Darwin's Indigenous population to assist those who are desperate to return to their loved ones.

The initiative is expected to run for a month and offer a vital service to those in need.

Shawn is from the Tiwi Islands, just north of Darwin, and hasn't seen his family for more than a year.

Free transportation is being offered to Indigenous people in Darwin to return home to their loved ones. Source: Aneeta Bhole

He said while he loves the Tropical Top End capital, being with his community is his number one priority during this difficult time.

"I'm very happy to go back home, I've been here in Darwin for a little while. I just want to get back home to family, who will be happy to see me," he told SBS News.

"It was good to be here in Darwin for a little while, see my family here in Larrakia country, but I'm happy to have my flights booked."

Shawn will return to the Tiwi Islands as part of an initiative being organised by Darwin-based Aboriginal Corporation, Larrakia Nation, who are offering people free passage home.

Return to country, return to safety

In just a matter of days, almost 300 people have been returned to country, the organisation's chief executive Robert Cooper said.

"We've been helping the NT Government get all community members, who want to return, back to their homes with no cost to them," he told SBS News.

Mr Cooper believes those choosing to take up the offer have done so for a number of reasons.

"Some of them don't understand what the coronavirus is all about and some of them recognise that they're safer if they go back to their community."

"Others see this as an opportunity to get back home when they've been stuck here for some time."

Mr Cooper added that many Indigenous people will travel long distances to town centres such as Darwin, Katherine and Alice Springs to access services.

"In times of crisis, for mental, emotional, cultural and even physical reasons they feel a lot better off going back to their community.

"They're able to better deal with the stresses that come with dealing with a situation like this.”

NT COVID-19 Health Lead Dianne Stephes said the safest place for Indigenous people from remote communities to be is back on country.

"We want as many people as possible to go back to community and stay there before this virus spreads," Ms Stephes told SBS News.

"We think that the remote community can be maintained as the safest place for people to be.

The NT has been mostly free of the COVID-19 global pandemic with no known community transmission and just one reported case. Source: Aneeta Bhole

"We are saying to our remote Territorians, stay where you are. Don't come into town, don't travel around."

Mr Cooper noted that a simple lack of understanding remains the number one problem.

"We had a client come down here yesterday who had seen one of our brochures and he thought he could come here and be tested for the virus."

"So, it's that lack of clarity of what is going on and clarity of how to respond."

The message in language

The NT Government has rolled out the message across nine Aboriginal languages thus far, with more becoming available as the pandemic continues to develop.

"It's been really important to explain what coronavirus is to try and do that in numerous languages," she told SBS News.

"There is enormous concern and fear, we've got to allay that by making sure that the messaging is out there."

Ms McCarthy said that remote Indigenous communities are the "most vulnerable" and that those already suffering health issues are fearful to come into town centres.

Indigenous people from remote communities are being told the safest place for them to be is back on country. Source: Aneeta Bhole

“I had a phone call from a lady in one of the communities concerned about coming into Darwin, who was supposed to come into Darwin, just for a look at her legs for prosthetics.

"She doesn’t want to come in because she feels safer in community."

All non-essential travel to remote Indigenous communities has been suspended by land councils across the Territory as authorities work to contain the COVID-19 threat.

Share
Published 20 March 2020 at 9:14am
By Aneeta Bhole
Topics
CoronavirusAustralia