A truck driver who travelled through both South Australia and Western Australia has sparked a COVID-19 scare after testing positive for the virus upon his return to New South Wales. 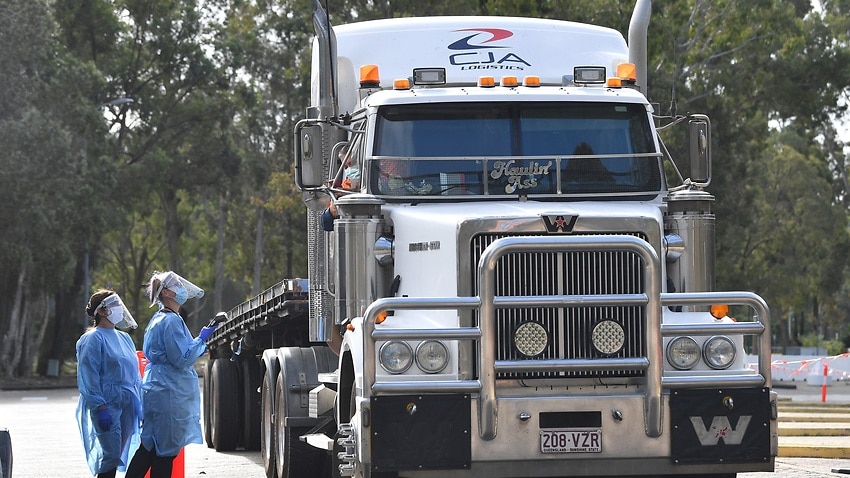 Pathology testers seen talking to a driver at a truck-only COVID-19 testing site in the car park of the Brisbane Entertainment Centre. Source: AAP

But authorities say at this stage the case won't impact the AFL grand final in Perth on Saturday.

A second driver who travelled in the same truck has tested negative for the virus.

WA Health Minister Roger Cook said he was confident the risk to the wider community was low, given the pair were in WA for less than 48 hours, from 16 and 17 September.

He said they slept in their truck and had indicated they wore masks any time they left the rig.

The infected man, in his 20s, returned a negative test before leaving for WA, but tested positive on his return to NSW.

He had received one dose of a COVID-19 vaccine.

Mr Cook expected only a small number of potential contacts, most likely among people who visited the same refuelling sites, but said checks were still underway.

Exposure sites had been identified at places where the truck stopped in Coolgardie, Southern Cross, Northam and Kewdale, on the inward journey and at Chidlow, Southern Cross and Balladonia on the return route.

Anyone who visited an exposure site was advised to get tested and isolate until they received a negative result.

SA Health said it had identified 10 exposure sites with most concern surrounding shower blocks at roadhouses in Penong on the state's west coast.

They were regarded as tier-one sites and anyone there at the same time will be required to get tested and quarantine for 14 days.

There were also sites of concern at Port Augusta, Wudinna and the Border Village.

Chief Public Health Officer Nicola Spurrier said the man had reported mild symptoms before getting testing and officials regarded him as infectious from 15 September.

Mr Cook said the discovery of the man's infection would not prompt any immediate changes to arrangements for the AFL grand final where a capacity crowd was expected at Perth Stadium.

If you attended an exposure location, you are required to follow the relevant health advice.

But he said that could change if there were more infections.

"It really depends on the positive cases and the background to those cases," he said.

"If there's a mystery component, that gives us greater cause for concern."

WA Police Commissioner Chris Dawson said based on public health advice no changes were expected with WA's border rules or the conduct of the grand final.

"At this point in time, there is no change being contemplated for the broader community," he said.

"Everything is going ahead as planned, even though we are still examining these particular truck drivers and their movements."

"Obviously it's a full house and what we don't want is people in a crowd crush going in at the last minute," he said.

Also on Wednesday, the WA government confirmed coronavirus vaccines would be mandatory for staff of WA's ports who access or work with vessels exposed to the virus.

The government has set a deadline of 15 October for all workers to have had at least one COVID-19 jab.

The direction applies to all commercial ports in WA and includes anyone who carries out a service in connection with an exposed vessel or who interacts with the crew.