United Australia Party leader Craig Kelly signed a group of anti-mandatory vaccine protesters in to Parliament House on Tuesday and claims to have delivered their list of demands to the prime minister. 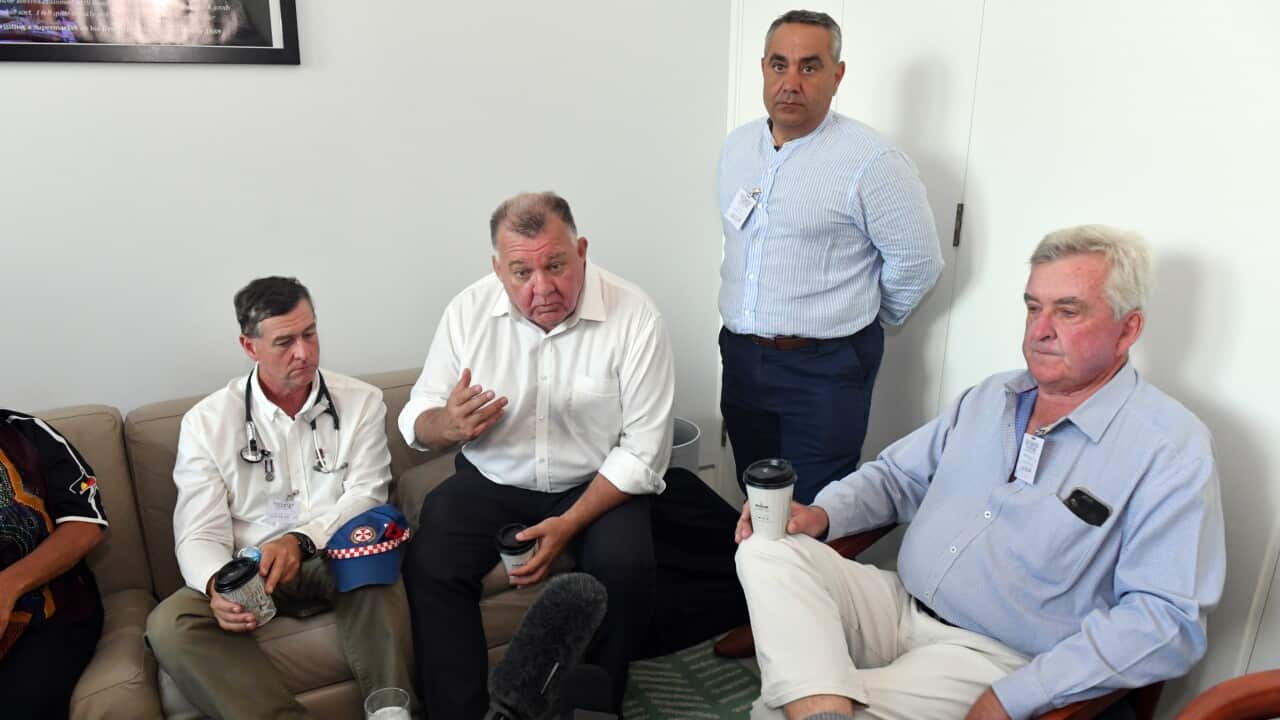 Mr Kelly tweeted a photograph of an open letter from the protesters whom he signed in to Parliament House in Canberra on Tuesday, after tweeting that he "stands with" them.

"I intend to invite a delegation of the Freedom Fighters into Parliament House to present their concerns to Morrison & Albo (Anthony Albanese)," he wrote.

Advertisement
The letter included a list of demands such as ending COVID-19 vaccination mandates, taking action to ensure all borders remain open and rejecting moves for "a society based on digital identity".

Other requests included ending the state of emergency, reinstating and compensating those "who have lost jobs due to vaccine mandates" and establishing an independent federal investigative body to investigate "misconduct during the COVID-19 period".

Mr Kelly is not the only politician to show support for the protesters.

Nationals MP George Christensen filmed a livestream of himself attending a protest against vaccine mandates in Canberra over the weekend.

Home Affairs Minister Karen Andrews said on Sunday she disapproved of the backbencher's decision to attend.

“I don’t agree with many of the views that George has been espousing of late. I don’t think that it’s appropriate for him to be attending those sorts of rallies,” she told Insiders.

“But he is a member of Parliament, he can make his own decisions in relation to that.”

Vocal anti-vaccination Liberal Senator Gerard Rennick was also among those protesting outside Parliament House on Tuesday.

The rogue Liberal said he was working to make sure children were not vaccinated against COVID-19.

The Australian Technical Advisory Group on Immunisation recommended in December the Pfizer COVID-19 vaccine be used in children aged five to 11 years.

The expert advisory group noted "real-world evidence on the safety of this vaccine in children aged five-11 years is rapidly accumulating overseas, including data on the low rate of rare adverse events following immunisation."

The Department of Health's recent figures show 93.8 per cent of Australians aged 16 and over have had their second dose of a COVID-19 vaccine and 95 per cent have received one dose.

A heavy police presence was in place on Tuesday as large numbers of anti-vaccination protesters gathered on the lawns of Parliament House.

There was a mix of attendees, with sovereign citizens, QAnon supporters and anti-vaxxers present.

Convoy to Canberra protesters wave flags and banners during a protest outside Parliament House in Canberra. Source: AAP

The protests against vaccine mandates occurred at the same time as a rally over the treatment of Afghan refugees in Australia.

At one point, the protests were positioned side-by-side, with some anti-vaccination protesters even joining in chants of “refugees are welcome here”.

Earlier, police warned Tuesday's anti-mandatory vaccine protests would be the largest yet since the Convoy to Canberra descended on the nation's capital last week.

Police officials said as many as 3,000 people could attend Tuesday's rally, with many roads around Parliament House blocked off.

It comes after demonstrators targeted the governor-general's official Canberra residence, Government House, along with the ABC Canberra newsroom in the city's inner north on Monday.

Meanwhile, a GoFundMe campaign that had raised more than $179,000 for the protests has been cancelled by the crowdfunding site.

Opposition home affairs spokeswoman Kristina Keneally said it is the responsibility of Prime Minister Scott Morrison to denounce ministers who "give comfort and support" to demonstrators who "enact violence".

"It is incomprehensible that a member of the Morrison government would think that it is appropriate today to go out and curry favour with extremists, who seek to do real harm to this building and the people who work in it."

Protests in front of Parliament House have been growing one week ahead of the first sitting week of parliament amid growing anger over mandatory COVID-19 vaccinations across the country.

People have travelled around Australia in what has been described as a "convoy to Canberra" or a "freedom convoy", where many have attempted to camp or illegally park in the Parliamentary Triangle.

The Australian Federal Police assisted the ACT Police on Friday to request the movement of the equipment of those who were found to be in breach of the law.

"ACT Policing reiterates its support for the right of individuals to conduct lawful, peaceful protests, but reminds the wider community not to take the law into their own hands if they see protesters acting illegally," the ACT Police said in a statement.

The demonstration has likely been inspired by the "freedom convoy" currently taking place in Ottawa's Canada, with truck drivers blocking roads and stopping traffic in a protest against the country's COVID-19 public health measures.

Canada's protests began after truckers expressed their frustration with vaccine requirements when crossing the US-Canadian border. It has since morphed into broader protests against COVID-19 health restrictions and the government of Prime Minister Justin Trudeau.

In the capital, demonstrators huddled around campfires in bone-chilling temperatures and erected portable saunas and bouncy castles for kids outside Parliament, while waving Canadian flags and shouting anti-government slogans.

The truck-led protest has prompted Ottawa's officials to declare a state of emergency, seizing petrol to de-escalate the movement, while an interim court injunction has banned the honking of horns that have irked Ottawa's residents.