The Immigration Department is “cutting it a bit fine” by having not yet secured a new provider to run the offshore detention centre on Nauru, according to an independent expert.

The contracts for running both the Nauru and Papua New Guinea detention centres expire by the end of October - six months from now.

The current provider, Broadspectrum, and its parent Spanish company Ferrovial, have announced they will not continue operating the centres beyond the current contract.

And that's "cutting it fine", warns professor of public management at the University of Melbourne, Janine O’Flynn.

“Given the scale and the significance, the political importance of this arrangement, we are probably cutting it a bit fine already,” she told SBS News. No companies have publicly expressed interest yet in taking up the contracts.

Professor O’Flynn, who has been studying government outsourcing for almost 20 years, says while the government is yet to open a public tender for the contract, private negotiations are likely underway.

“We know there is going to have to be a substantial transition period from one provider to another… you don’t just literally walk out one day and a new provider walks in the next.”

‘Fast and loose with taxpayers' money’

There are almost 1,400 people detained in the centres on Manus Island and Nauru, according to the Department of Immigration and Border Protection.

The United Nations High Commission for Refugees in March said at least 850 people, found to be refugees, would be referred to the United States for potential resettlement under the deal announced in November last year.

It isn’t known how many the US will take under the arrangement.

Prime Minister Malcolm Turnbull confirmed on Saturday the Manus Island centre would close by the end of the year. However Immigration Minister Peter Dutton on Sunday told Sky News there would be an ongoing need for the Nauru detention centre.

“We hope that many of those people can be resettled in the United States and we’ve said that we will have an enduring need for Nauru because the threat from people smugglers and boat arrivals will never go away,” Mr Dutton said.

He also said asylum seekers who did not gain refugee status, and were hence ineligible for resettlement, could be given 20-year visas to remain on Nauru. “The new tender process for garrison and welfare services in offshore centres has been suspended by the Turnbull Government. The Minister is cutting it fine with these contracts,” Mr Neumann said.

The government does not contract a provider to specifically run the detention centres, but instead contracts a range of what it terms the ‘garrison and welfare’ services, such as cleaning, health care and guarding the camp.

The Australian National Audit Office released reports in January this year and September last year, which highlighted poor Departmental oversight of the contract provider and examples of mismanagement and wasteful spending. Audit finds $1b spent on offshore detention without authorisation

“It would be no surprise if the Immigration Department and Minister Dutton once again played fast and loose with taxpayers' money and failed to follow a proper process,” Mr McKim said. ‘Process will be followed’

A Department of Immigration and Border Protection spokeswoman declined to comment on whether the new Nauru contracts would be reached through open tender.

“The Department is considering next steps to ensure service delivery continues in regional processing countries. Any new procurement process will be conducted in accordance with the Commonwealth Procurement Rules,” the statement said.

Professor O’Flynn said the detention centre contracts were extremely complicated, partly because of the opaque way providers were contracted for individual services.

She said the issues highlighted by the Audit Office had been consistent throughout both Labor and Coalition governments.

“The fact that the Australian government had now had two decades of experience in procuring and managing offshore detention and still encounters the same problems shows there is a massive issue in terms of feasibility to contract efficiently in best practice,” she said.

There is also ongoing uncertainty about the relationship with the Nauruan Government.

Last month two Wilson Security staff were arrested and deported from the country, without any charges.

The Refugee Action Coalition's Ian Rintoul told SBS News that sources working inside the detention centre had told him the two deported staff were both senior managers for Wilson and that the deportation was a part of a disagreement of the hiring of local staff.

Wilson Security and a spokeswoman for the Nauran Government did not respond to SBS News's requests for comment.

Broadspectrum has come under pressure from human rights groups, including a recent report from Amnesty International, which also issued a warning to potential bidders. 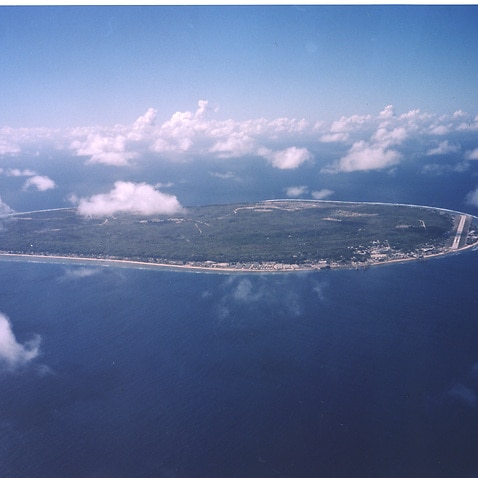 Amnesty warns contractors seeking to ‘profit from despair’ on Nauru

Professor O’Flynn said that while political pressure from activist groups meant it was unlikely many Australian companies would take the contracts, there may be interest from private American prison providers, many of whom had moved into the growing detention centre industry in the United States.

“Internationally, many countries are looking to Australia for inspiration for how to deal with these issues,” she said.

“That's a sort of commercial conundrum because what we know from the audit is that they haven't been managed very well at all." Royal commission to look into child welfare in immigration detention