Attitudes between motorists and cyclists are changing but the push to share the roads continues.

Thirty-five cyclists from a variety of backgrounds and experience have started an epic 900-kilometre, six-day ride through southern NSW in the latest bid to raise awareness for safety on two wheels.

The Share the Road Tour is an initiative by the Amy Gillett Foundation as it attempts to persuade government authorities to legislate the Metre Matters regulation which is pushing for drivers to leave a minimum distance of one metre when overtaking cyclists.

According to AGF Chairman Mark Textor, the organisation is running at over 60 per cent awareness nationwide.

"We've been encouraged by our reception on the roads" Textor said.

“We try and be courteous towards drivers at all times. That's what it's all about mutual respect on our roads."

Among the riders participating are some of Australia's elite past and present achievers.

When they're not competing on the circuits or velodromes of the world, each are actively training on the roads in their respective home states.

The elite are being joined by many recreational riders, each of whom have raised a minimum $7,500 and are paying their own costs to take part in the ride from Sydney to Canberra.

The Amy Gillet Foundation is named after former champion elite Australian cyclist who was killed in Germany in 2005 when hit head-on by an out-of-control-car.

Amy's legacy lives on and so does the message of road safety between motorists and cyclists through her husband Simon Gillett and Amy's parents Dennis and Mary Safe who are either riding or supporting the cyclists heading to the nation's capital.

Amy's death was a catalyst for change.

"It's amazing. I have to pinch myself sometimes," said Mary.

"The sadness is always there but when I think of the positive things that have come out of this. Amy was such a positive young woman. She would be absolutely gobsmacked." 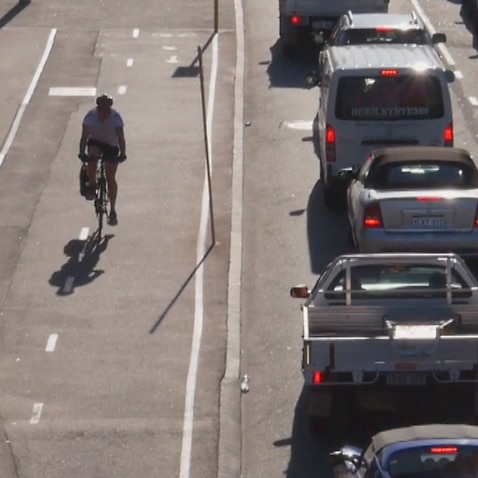 "More people would cycle if there were safer options": cycling injuries on the rise

The Metre Matters campaign has significantly reduced collisions between drivers and bike riders nationwide in the last 10 years.

Among the states and territories either passing or trialling legislation to regulate minimum overtaking distances include Queensland, South Australia, ACT and Tasmania.

However there is still resistance from the authorities of the country's two most populous states, NSW and Victoria.

"NSW seems to be a difficult area - there seems to be an "us and them" culture here, " Textor said. "Not all authorities in Victoria support Metre Matters which is disappointing.

"There's no doubt attitudes from motorists towards cyclists are changing".

Talk to regular road users of the two wheel variety and the responses are positive.

"A lot more motorists are cyclists themselves now so we are tending to get more respect from them".

The AGF's mission is for safe cycling in Australia, while the vision is a target of zero bike fatalities by 2020.

Statistics prove there are more bike-riders on our roads than ever before and numbers are expected to swell further in the future.

"I am making a conscious effort in Australia to be seen," Neylan explains. "I'm wearing a lot of fluro gear to try and brighten myself up so I can be seen on the roads at all times."

The riders' arrival in Canberra this weekend celebrates the work of the ACT Government which introduced its overtaking distance legislation on November 1.

The Share the Road Tour will pass through major towns including stopovers at Fitzroy Falls, Huskisson, Cooma and Tumut before arriving in the national capital on Saturday.