The Mexican government is not reporting hundreds, possibly thousands, of deaths from the coronavirus in Mexico City, dismissing anxious officials who have tallied more than three times as many fatalities in the capital than the government publicly acknowledges, according to officials and confidential data.

The tensions have come to a head in recent weeks, with Mexico City alerting the government to the deaths repeatedly, hoping it will come clean to the public about the true toll of the virus on the nation’s biggest city and, by extension, the country at large.

But that has not happened. Doctors in overwhelmed hospitals in Mexico City say the reality of the epidemic is being hidden from the country. In some hospitals, patients lie on the floor, splayed on mattresses. Elderly people are propped up on metal chairs because there are not enough beds, while patients are turned away to search for space in less-prepared hospitals. Many die while searching, several doctors said.

“It’s like we doctors are living in two different worlds, ” said Dr. Giovanna Avila, who works at Hospital de Especialidades Belisario Domínguez. “One is inside of the hospital with patients dying all the time. And the other is when we walk out onto the streets and see people walking around, clueless of what is going on and how bad the situation really is.”

Mexico City officials have tabulated more than 2,500 deaths from the virus and from serious respiratory illnesses that doctors suspect were related to COVID-19, according to the data, which was reviewed by The New York Times. Yet the federal government is reporting about 700 in the area, which includes Mexico City and the municipalities on its outskirts.

Nationwide, the federal government has reported about 3,000 confirmed deaths from the virus, plus nearly 250 suspected of being related, in a country of more than 120 million people. But experts say Mexico has only a minimal sense of the real scale of the epidemic because it is testing so few people.

Far fewer than one in 1,000 people in Mexico are tested for the virus — by far the lowest of the dozens of nations in the Organisation for Economic Cooperation and Development, which average about 23 tests for every 1,000 people.

The government says Mexico has been faring better than many of the world’s largest countries, and on Monday its COVID-19 czar estimated that the final death toll would be around 6,000 people.

“We have flattened the curve,” Hugo Lopez-Gatell, the health ministry official who has become the face of the country’s response, said this week.

But the government did not respond to questions about the deaths in Mexico City. It also denied repeated requests by The Times over the course of three weeks to identify all deaths related to respiratory illnesses since January, saying the data was incomplete.

One former health secretary, José Narro Robles, has accused Lopez-Gatell of lying to the people of Mexico. And some state governments are beginning to draw similar conclusions: that, much like Mexico City found, the data presented by the government does not reflect reality.

Official counts in many countries have understated the number of deaths during the pandemic, especially where limited testing has prevented the virus from being diagnosed, a Times review of mortality data has found. In Ecuador, six times more people have died than official figures reflect, the data show. In Italy, the overall increase in deaths in March was nearly twice official counts.

In Mexico City, the doubts started a month ago, when the city’s mayor, Claudia Sheinbaum, began to suspect that federal data and modelling on the epidemic were flawed, according to three people with knowledge of the matter.

She had already instructed her staff to call every public hospital in the Mexico City area to ask about all confirmed and suspected COVID-19 deaths, the people said. In the last week, that effort found that the deaths were more than three times what the federal government reported.

The disagreements have taken place largely behind the scenes, as Sheinbaum, who declined to comment for this article, has been loath to publicly embarrass President Andrés Manuel López Obrador, her close political ally. The city and the federal government continue to work together on a number of fronts, including getting ventilators.

But the data from Mexico City calls into question the federal government’s grasp of the crisis in the country. With such limited testing and doubts about the government’s models, experts say federal estimates for when the nation will reach its peak, how long the epidemic will last and how bad the damage will be may not be reliable.

That disconnect has left cities and states across the country scrambling to meet the demand for protective equipment and ventilators. It also underplays the severity of the epidemic for millions of Mexicans, making it hard for them to determine how bad the situation is — and how seriously to take it.

“That is shocking,” said Fernando Alarid-Escudero, who has a Ph.D. in health decision sciences and who developed an independent model in collaboration with scientists at Stanford University to chart the curve of the epidemic in Mexico. “If that is case, and we are not really capturing all those people who eventually die, we are not getting a sense of the picture.”

“We are way underestimating the magnitude of the epidemic,” he added.

In Tijuana, hospitals are already overwhelmed. Doctors and nurses across the country have held public protests against the lack of protective gear, and several hospitals along the border have suffered outbreaks of the virus among medical personnel. Federal officials have been scrambling to buy respirators, long after seeing the outbreaks grip China, Europe and the United States.

One big reason for the competing death tolls in Mexico has to do with way the federal government is testing, vetting and reporting the data. The official results include a two-week lag, people familiar with the process say, which means timely information is not available publicly.

More worrisome, they say, are the many deaths absent from the data altogether, as suggested by the figures from Mexico City, where the virus has struck hardest of all. Some people die from acute respiratory illness and are cremated without ever getting tested, officials say. Others are dying at home without being admitted to a hospital — and are not even counted under Mexico City’s statistics.

Beyond that, Mexico appears to be vastly underreporting suspected deaths from coronavirus. Data published by the federal government on May 7 show only 245 suspicious deaths nationwide.

The gap in information has left many Mexicans with a sense that their country has avoided the harrowing outbreaks afflicting nations like the United States, where nearly 1.2 million people have been infected and more than 70,000 people have died, according to the Centers for Disease Control. Publicly, Lopez-Gatell, the health ministry official, has become something of a celebrity, steering nightly news conferences in which he assures the public that things are moving according to plan. How the coronavirus amplified divisions between rich and poor in Paris

But there have been problems with the government’s assumptions from the very beginning, according to three people familiar with its preparations. As early as February, they said, the government was using Wuhan, China — the city where the pandemic originated — to model the potential needs and response in Mexico.

But those calculations quickly went awry, the people said, as officials realised the dynamic in China was entirely different from the one in Mexico. As the outbreak spread in Wuhan, Chinese officials locked down the city and the surrounding province, prohibiting tens of millions of people from traveling.

In Mexico, by contrast, the lockdown measures have been optional, with officials simply urging people to go to hospitals or stay at home, depending on symptoms. There are no travel restrictions in or out of Mexico City.

In the last month, the government has added experts to review the data and analysis, after urging from the country’s foreign minister, Marcelo Ebrard, and other officials. But even those newer models make assumptions that experts feel are inadequate.

“Their model is wrong,” said Laurie Ann Ximenez-Fyvie, a Harvard-trained Ph.D. at the National Autonomous University of Mexico, adding that symptomatic and severe cases could be significantly higher. “There is very good consensus on that.”

Several experts also questioned Mexico’s assumptions of how quickly the epidemic will pass. Its model shows a sharp rise in infections, followed by a sharp decline. But in almost no other country in the world has there been a rapid decline after a peak.

“There is a long tail for the curve, and the number of deaths does not drop to zero anytime in the near future,” said Nilanjan Chatterjee, a professor in the department of biostatistics at the Bloomberg School of Public Health at Johns Hopkins University. “The graph they are using is inconsistent with the shapes of the curve in other countries.” 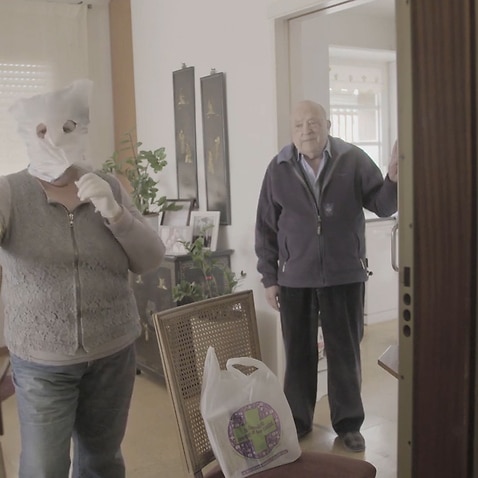 The coronavirus has overwhelmed Spain. This is how some residents have coped