Hard-core music, theatre and movie aficionados from around the world told us how they’re coping in coronavirus lockdown. 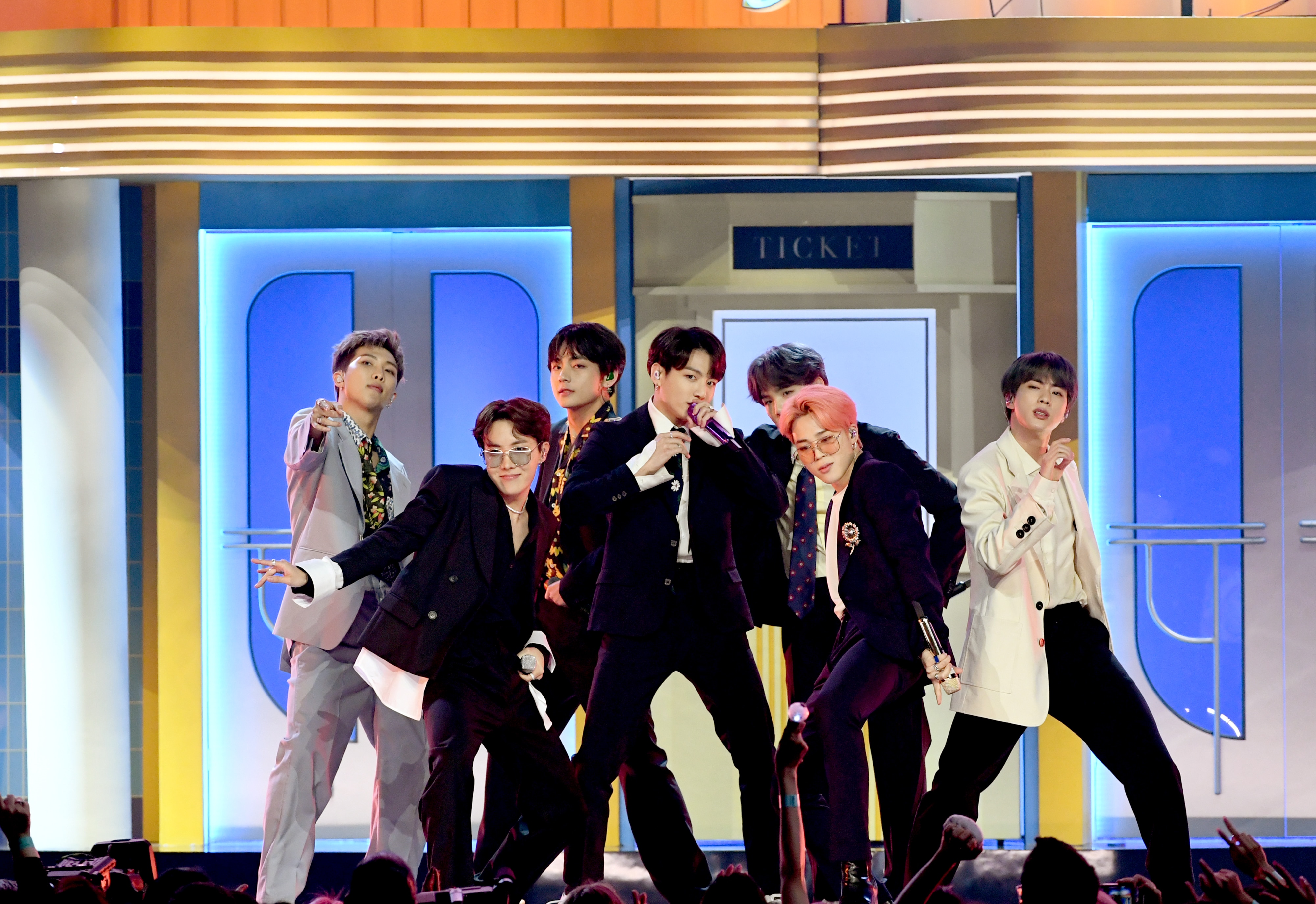 Jiyoung Lee knows she’s an unlikely fan of BTS, the South Korean boy band. The seven-member K-pop group has attracted a passionate international following in recent years, selling out stadiums across Asia and the United States, largely to audiences in their teens or early 20s. Lee, on the other hand, is a 49-year-old professor at Sejong University specialising in the notoriously impenetrable work of French philosopher Gilles Deleuze.

“When I talk about BTS in public, some people look at me like, ‘Oh my God, she is a middle-aged woman and a philosophy professor, what happened to her?” the soft-spoken academic recently said via Skype from her apartment in Seoul. “But what is wrong with listening to good music?”

In addition to her work on French philosophy, Lee has also published a book about the band, which has been translated into English as “BTS, Art Revolution.” Sometimes, she said, she has spent all day on weekends watching BTS videos, and has run up to 10 BTS fan Twitter accounts simultaneously, which she uses to connect with other members of “the Army,” as the group’s die-hard fans call themselves.

Lee planned to attend all four Seoul concerts for BTS’ “Map of the Soul Tour,” originally scheduled for mid-April. Because tickets sell out so quickly, she had enlisted her son to help her buy them at an esports cafe she had chosen for its high-powered computers and fast internet. But when the concerts were canceled in February as the coronavirus spread in South Korea, “my dream was gone,” she said.

After the cancellations, Lee said, she was inspired by the messages of compassion and positivity in some BTS songs to donate the refund for the tickets to a South Korean disaster relief organisation. (That group received the equivalent of more than $430,000 from BTS fans.) “BTS is not just an object of fascination from little girls screaming,” she said.

I feel like I am very close friends with them, and we wanted to do something good for BTS, as friends.

Although the restrictions on public life brought about by the coronavirus are less stringent in South Korea than in many other countries, Lee has been almost entirely confined to her apartment in Seoul since February, she said. Her 24-year-old son has Crohn’s disease, an inflammatory condition that requires him to take immune-suppressing medicine and puts him at particular risk of getting severely sick from the virus. “It is very scary,” she said. “I don’t want to imagine what happens if my son is affected.”

So instead, Lee has found another form of escape. She sometimes climbs into her car with her husband and son, and making sure the windows are rolled up, they drive around their neighborhood, blasting BTS at maximum volume.

“We cannot go outside the car, but with BTS and the cherry blossom trees,” she said, “it’s perfect.” 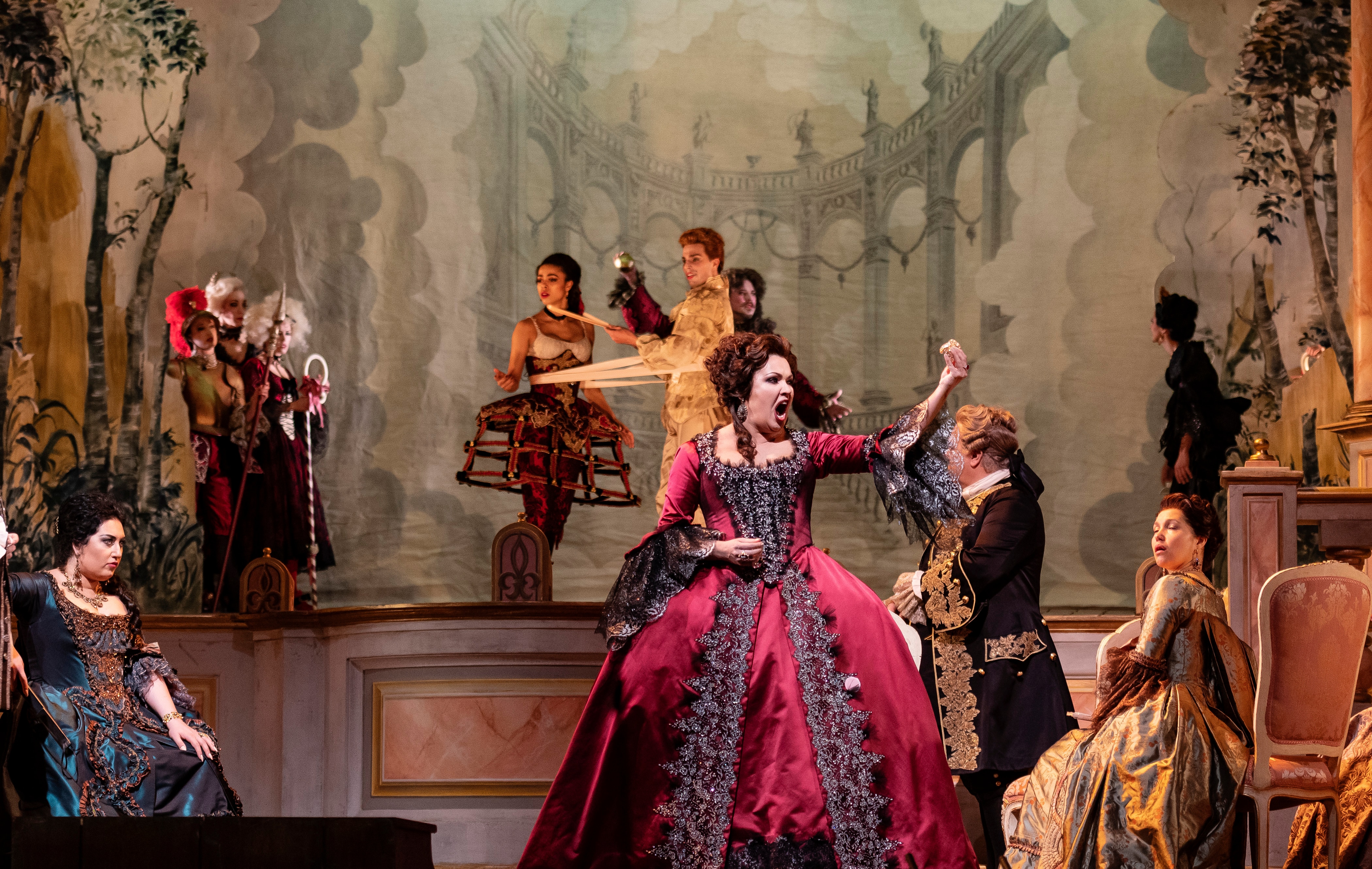 Russian soprano Anna Netrebko performs with mezzo-soprano Anita Rachvelishvili from the Republic of Georgia in 'Adriana Lecouvreaur' at the Met.
Jack Vartoogian/Getty Images

For about 25 years, starting in the 1980s, Jean Andrews’ Friday nights would involve hours of waiting for standing-room tickets to the Metropolitan Opera. The tickets she wanted weren’t on sale until 10 a.m. Saturday, but because Andrews was adamant about watching performances from the front row, she would often get in line at midnight with the city’s other hard-core opera fans.

“We had brawls about people cutting in line,” she said via Skype from her apartment in Brooklyn. “The ‘Ring’ cycle was really cutthroat.”

A retired geologist and lawyer, Andrews might be one of New York’s most obsessive opera-goers. Before the city’s venues closed their doors March 12, she was attending about 10 to 15 opera-related performances per month, she said — a reduction from some years, when it had been more like 25. Unsurprisingly, the news of the shutdown came as a blow. “I was in shock,” she said, “just in shock.”

The Met has since furloughed much of its staff and canceled the rest of its season; the company’s post-pandemic future is unclear. “It is one of the great opera houses of the world, and I worry about it,” Andrews said. Shortly after the Met shut down, Andrews confronted a potentially greater calamity, when Bill, her husband of 25 years, came down with symptoms of COVID-19. “I think maybe Bill getting sick so early made it so I wasn’t worried about opera anymore,” she said. “Instead, I was worried about him, and me.”

As her husband quarantined himself in the room next door (and ultimately recovered), Andrews passed the time watching streams of opera performances in her bedroom, including Bizet’s “Carmen.”

“I would never go see a ‘Carmen.’ I don’t even like ‘Carmen,’” she said. “But I thought it was the greatest thing I’d ever seen.” Members of the Blue Man Group at Queen Elizabeth Theatre in 2014 in Vancouver, Canada.
Andrew Chin/FilmMagic

By his own estimate, Hans Swaerdens has seen the Blue Man Group, the long-running stage act featuring three men in bald caps and garish makeup, about 200 times. He has taken part in Blue Man Group cruises, organised fan meet-ups around the world and even built his own version of the group’s trademark three-person percussion instrument out of plastic piping.

This year was meant to be a good one, Swaerdens said. In May, he and his family were supposed to travel to Chicago, where the Blue Man Group has an ongoing show that he hoped to see “two or three times” during his visit. The act was also slated to come to the Netherlands on tour, and in September, he was hoping to travel to the group’s residency in Las Vegas.

But the group’s residencies have now shuttered, and Cirque du Soleil, which acquired Blue Man Group in 2017, has furloughed 95% of its staff.

Swaerdens, a jovial man with a bald head that gives him a Blue Man-esque silhouette, struggled to explain what it was about the show and its blend of stunts, musical performance and slapstick comedy that resonates so deeply with him. “It’s like Mr. Bean,” he said. “You either love it or hate it.”

But he noted that his most intense periods of fandom had coincided with particularly stressful periods in his life, when he was having a dispute with a stalkerish acquaintance, for instance, or struggling with a side business as a handyman. “When you see the show you are able to forget all the things that are happening in your life,” he said.

At the moment, he added, he could use some distraction. Swaerdens’ work involves inspecting planes after they arrive at Amsterdam’s Schiphol airport, but, as travel has plummeted, so has his workload.

“I hope I have a job at the end of the year,” he said. “Not being able to see the show, it’s the least of my problems right now. Though, it would be nice.” 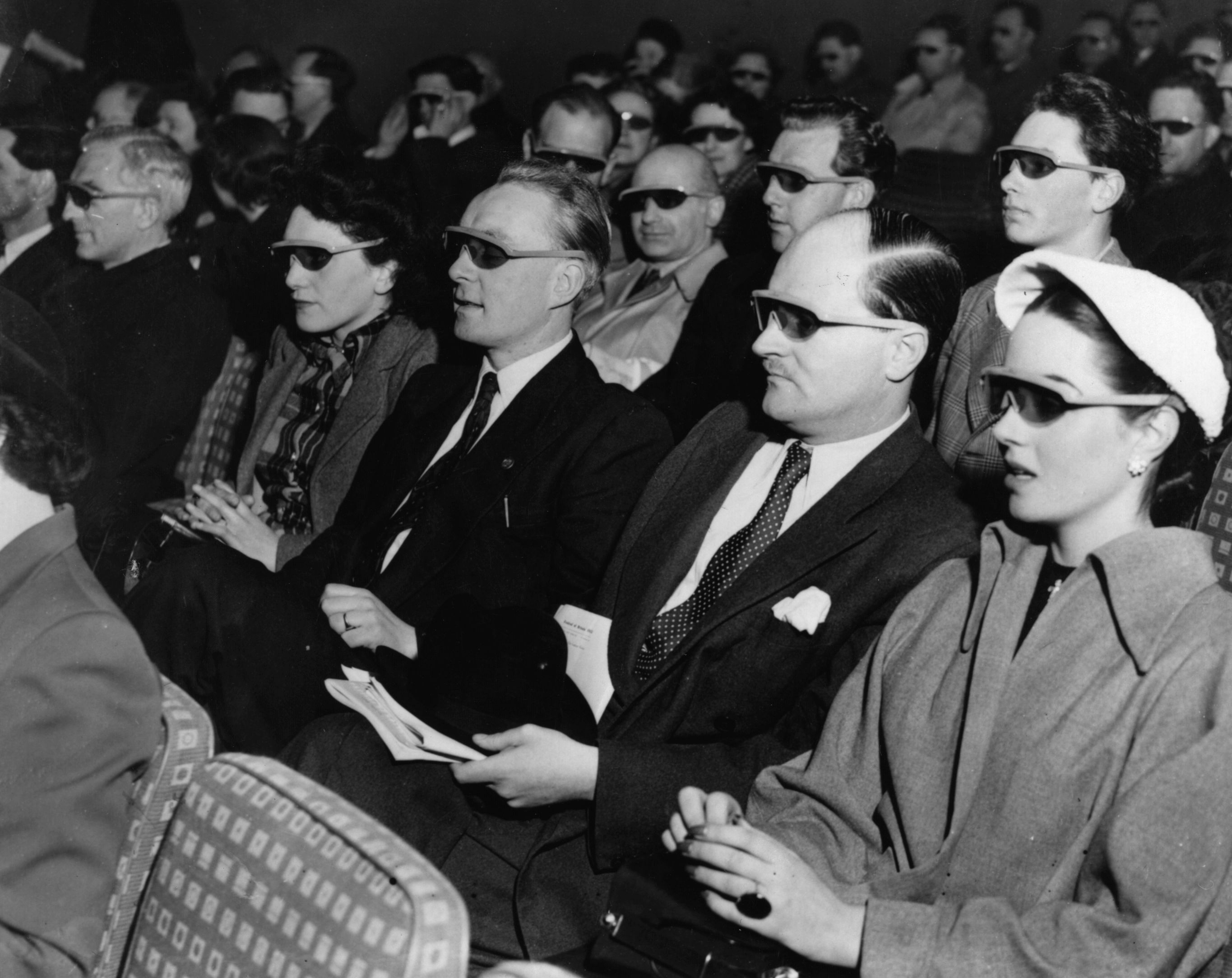 Throughout their 60-year marriage, Erika and Ulrich Gregor have been steadfast movie-goers. By their estimate, they’ve been to the movies together more than 22,000 times — that’s an average of once every day.

In the coming months, the pair had counted on visiting the Cannes Film Festival, the Karlovy Vary Film Festival in the Czech Republic and, one of their favourites, goEast, a festival of mostly Eastern European film in the central German city of Wiesbaden. There, Erika Gregor explained in a joint phone call from their home in Berlin, the pair often sees five or six films a day.

Since Berlin’s movie theatres were shuttered in mid-March, the Gregors have been mostly confined to their home. Ulrich Gregor explains that they miss “sitting in the front row and seeing the curtain open,” and that, instead of going to the movies, they have largely been watching streams of local theatre performances.

Movie theatres can never fully be replaced by at-home viewing, Ulrich Gregor said, since cinemas are “a place where you meet and form opinions and change opinions” through interpersonal interaction.

The couple has shared an obsession with moviegoing ever since they met in 1957, at a screening Ulrich Gregor was hosting at the Free University in Berlin. At the event, Erika Gregor recalled, she told him she wasn’t fond of the film he had shown that evening, a 1930 silent German movie called “People on Sunday” which she deemed “sexist and un-humanist.” Ulrich Gregor promised to show a more progressive film if she returned. She did, and a year later, they launched a film club together; three years later they were married.

“I always wanted to change the world,“ Erika Gregor said. “Then I met Ulrich, and I saw that by showing movies and discussing it with the audience, you could change something.” For decades, they organized film events in Berlin, and co-founded an art-house movie theater, called Arsenal, from which they retired in 2002. 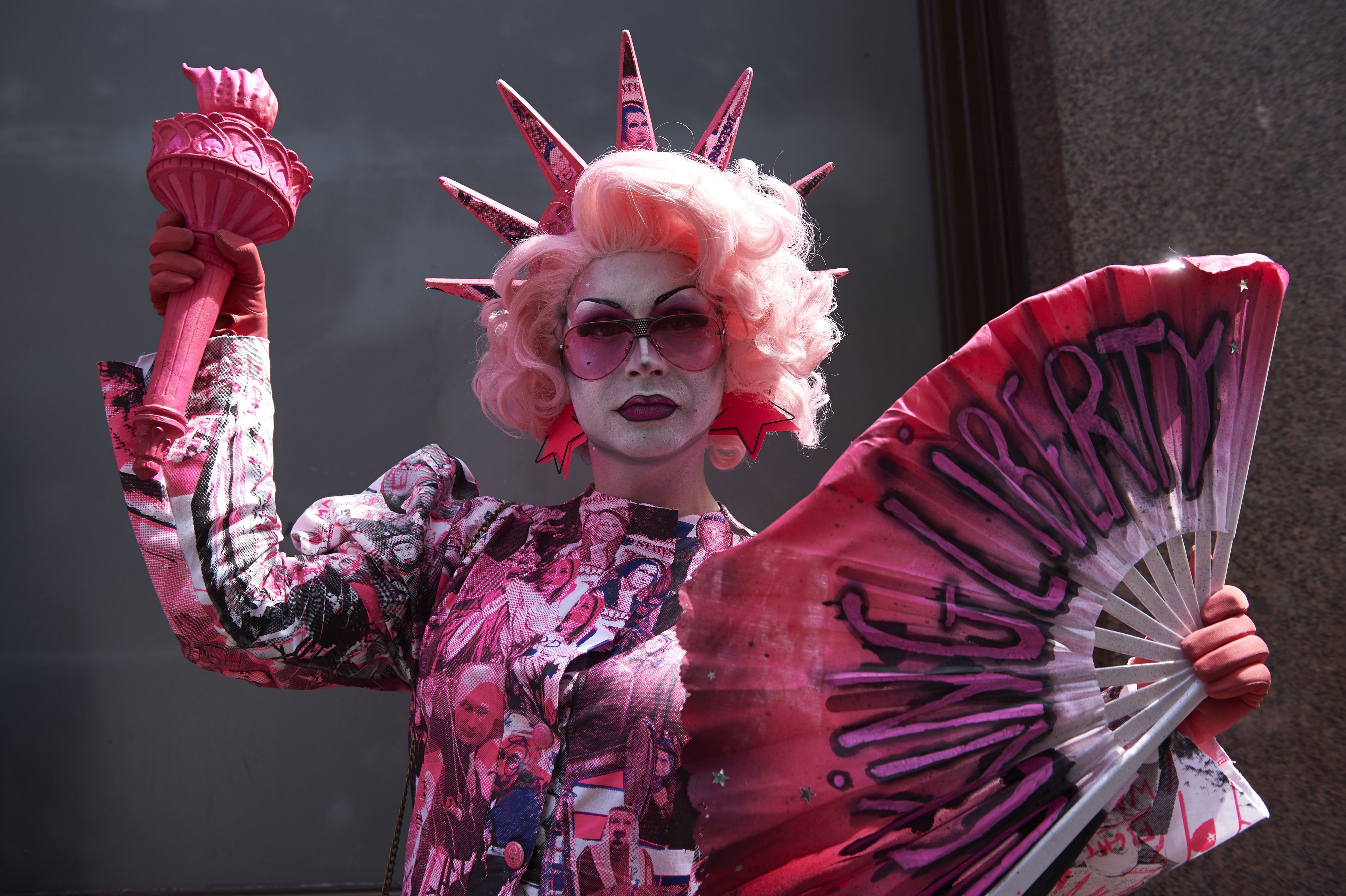 A drag queen joins protesters against the UK visit of US President Donald Trump as they gather to take part in a march and rally in London on July 13, 2018.
NIKLAS HALLEN/AFP via Getty Images

Of all the things Kai Gault, 31, misses about going to drag shows — the costumes, the music, the performers’ banter with the crowd — the biggest is human contact. “I miss being able to hug a drag queen,” Gault recently said via Skype from San Francisco.

Until recently, Gault — who works as a teacher’s aide at a school for emotionally disturbed teens and uses the gender-neutral pronouns they and them — would attend several drag shows every week, they said. Gault first discovered their love of drag in 2007, while attending Oakland University in Michigan. At that time, they still identified as straight and female. “Seeing people get up onstage and look so fabulous and express themselves, it resonated for me,” they said. “There was a little part of me reaching for this, grappling to get out.”

Since the pandemic started, Gault has watched some online drag shows, which often blend prerecorded videos and live elements on digital channels like Twitch and Instagram. “The online shows are not a substitution for an in-person connection,” Gault said. “You’re sitting there with a drink, watching drag on TV. I’m a bit over that now.”

Gault is not particularly worried that the virus will be a death knell for the city’s drag scene, which was already struggling as rising rents force venue closures. “I’m worried about people individually, but I’m not worried about drag as a whole,” Gault said. “It’s been around this long through all of history, so I don’t think it’s going anywhere.”

“Even if the world is burned down and we’re huddled in tents,” they said, “we’ll still have drag shows.”