Colombia has hosted over 1.6 million Venezuelans since the once wealthy nation suffered an enormous economic collapse in 2014. Now, with Colombia under lockdown due to the coronavirus, many migrants without official status have lost their ability to earn a living. Despite no improvement in conditions, some have decided to return - on foot. Australian video journalist Yasmin Bright has been living in Bogotá since borders closed across Latin America, and met those making the dangerous journey.

In downtown Bogotá, a trip to the supermarket isn’t complete without purchasing something for the hungry or homeless waiting out the front of the store. They ask for basics - like baby formula, rice, eggs, flour, oil, and tuna - and I usually carry a bunch of bananas in my shopping bag, which more often than not I’ve given out before I arrive home.

On March 24, the Colombian government ordered a nationwide quarantine. The nation of 50 million people has since recorded just over 39,000 cases of COVID-19, and 1,259 deaths. The ensuing lockdown has had a significant impact on financial circumstances for many, and has those working in the informal economy the hardest.

These days, a large percentage of the informal workers in Colombia are Venezuelan migrants. More than 4.5 million people have fled Venezuela since the economic collapse in 2014, making this one of the largest mass migrations in recent history.  Once Latin America’s richest economy with the largest oil reserves in the world, life under authoritarian President Nicolàs Maduro became desperate for many: currency became worthless after inflation reached a million percent; malaria, measles and diphtheria made a return in the wake of scant medical supplies; and in 2017, a study by a consortium of Venezuelan universities found that nine out of ten people didn’t have enough money for their daily food.

According to the UNHCR, around 1.6 million Venezuelans are currently living in neighbouring Colombia, and more than half of those lack official status. Many of these earn money by working on the streets: selling fruit or cigarettes in the street, candy at traffic lights, or recycling from the waste they collect around the city. For many, there are no savings to fall back on.

But with a lockdown in place across Colombia, and no access to government or family support, some of those Venezuelans are making the return to their crisis-hit homeland - on foot.

Bogotá’s neighbourhood of Unir II started as an illegal settlement, and now houses some of the poorest residents in the city. Having several families living under one roof is not uncommon in Unir II, as many are increasingly unable to pay the rent on their own. Now, a system has emerged where red t-shirts and jumpers are hung from the windows of some houses, letting people know the occupants desperately need help.

Bart Dijkstra, from the Netherlands, and Camilo Gutierrez, a Bogotá local, run a foundation called Casa de Los Suenos. Before the pandemic they organised extra-curricular activities for the children. Now, they deliver bags of food around Unir II, trying to help alleviate some of the financial pressure for the hardest-hit families, most of whom are Venezuelan. They are crowd-funding the venture, and usually find that a weekly bag of food delivered by their organisation helps families stretch their finances further. One woman I talked to in Unir II, who didn’t want to be named, stood with a child on her hip and another by her side and said a gang of men came into her home recently and took everything: food, clothes, even the colour pencils of her 5 year old daughter. She says they were targeted because of some of the questionable behaviour from other Venezeulans living nearby. Despite this she doesn't want to think Venezuelans are being discriminated against in the community.

Nearby, Crisna has four young children, including a 2 month old baby. She invited me upstairs into her home, which is mostly open to the sky, except for one room that has a roof, and windows sealed with plastic. Despite the poverty, I was struck by how clean everything is. The concrete slab on which her children and nieces are playing, has been swept thoroughly.

She laughs at the suggestion of leaving. “Oh no, no I can’t leave. It would be so hard to walk with all these kids. At least here we have food, and sometimes neighbours help us out.”

But a number of families in this area, unable to pay their rent, have run out of options. Bart and Camilo strongly encourage families not to leave, but some have decided to walk back to Venezuela - a dangerous journey of 550km, along a mountainous, freezing road - taking only what they can carry themselves.

At least in Venezuela, they reason, they will have a roof of a friend or family member over their head, and not have to worry - every day - about how they will pay the rent.

The situation they fled from in Venezuela has not improved. Many hospitals lack medication, soap and disinfectants, and experience regular water shortages. Poverty levels are still high.  As of 9 June, 2377 cases of COVID-19 have been recorded in the country, although organisations like Human Rights Watch suspect the amount is much higher, due to issues with testing, transparency and as they describe, “the persecution of medical professionals and journalists who report on this issue.”

Along the way, I met a woman with two cheeky kids inside a covered wagon being pulled by their father pulling along the highway. They told me it’s where they sleep at night, for safety, and protection from the elements.

Their parents are worried about the cold, and the dangers of the fog and the traffic, but the boys are like regular boys, wanting to jump around barefoot, play and show off.

“You just don’t know what’s ahead.” The boy’s mother told me. “It’s quite stressful. It’s just God helping us and guiding us.”

That night I watch as the relentless Bogotá rain comes down. I think about the families, and hope they’ve been helped and guided, somehow, to shelter and safety. 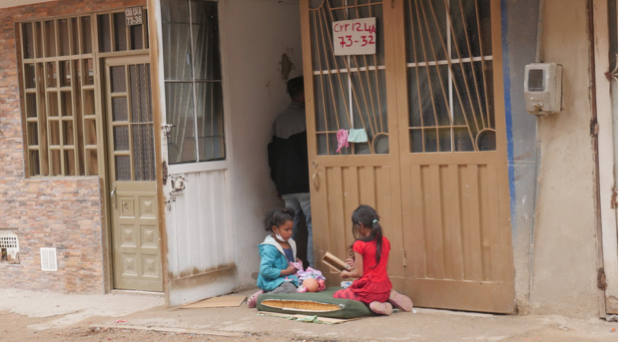