As Australia reaches 100 coronavirus cases, one doctor says a national lockdown should be considered. 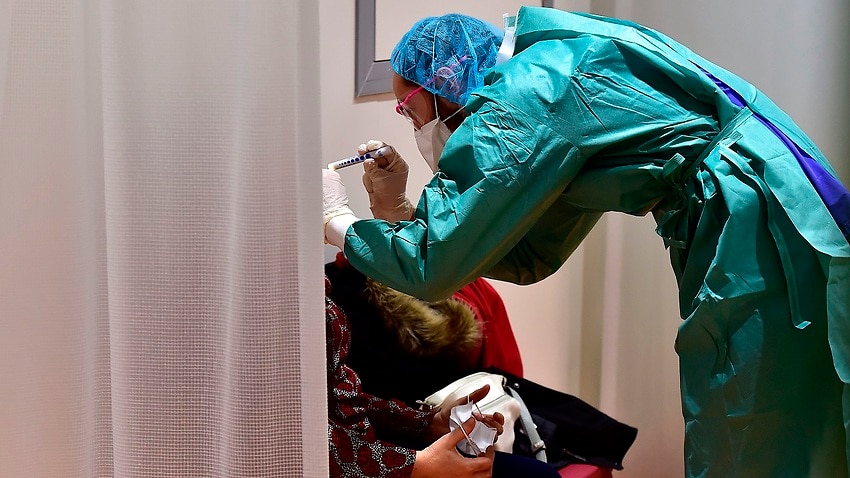 A doctor examines a patient amid the coronavirus scare. Source: Getty

Debate is raging after a Sydney doctor called for all Australians to enter a two-week period of self-quarantine to curb the spread of coronavirus.

Dr Hull said a mass quarantine, like that announced in Italy, was inevitable locally and should be done sooner rather than later.

The proposal would involve school and university closures, working from home and cancellation of large events.

"Whenever we do it, there will be cost and there will be hardship, but if we do it later when people are already becoming very ill, then that's an added burden."

Dr Hull said starting a nationwide quarantine now is about "nipping [the coronavirus] in the bud".

"[It would] give us all some breathing space - for the health system to get used to what works best; how we can protect our workers; how we can best set things up to have enough hospital capacity for the people that are going to be sick," she said.

"We could reduce the pool of infections for a period of time, we might slow the spread."

Dr Hull said she came to this conclusion when she was forced to self-isolate after a colleague at Ryde Hospital contracted the virus.

"We don't yet know how easily this is spread ... It's very hard for us to manage a disease where there are so many unknowns," Dr Hull said.

"We don't have a vaccine, we don't have any direct treatment ... To stop it, we only have barriers like isolation."

But experts and the government have hit back at Dr Hull's proposal.

"Making statements like this can be unhelpful because it starts to elevate the level of anxiety about this outbreak," he said.

Associate Professor Kamradt-Scott said the government's response was based on the current situation.

"Australia has a pandemic plan which has a series of phases which we move through and it's always proportionate to the nature of the challenge. And so a nationwide lockdown at this point would not be proportionate, nor appropriate," he said.

"We do not have widespread community transmission. All we have identified at this point in time is a series of clusters and public health authorities are working overtime to try and prevent those clusters from becoming larger."

He said statements like Dr Hull's can "impede public health efforts" and lead to such things as the "toilet paper fiasco".

"If we end up with people lurching to extreme statements, it undermines public trust in our institutions and contributes to further problems."

Make sure you practise good cough/sneeze etiquette to help protect you and others from viruses. This means covering your cough or sneeze your elbow or tissue, disposing or your tissue and washing your hands. More info: https://t.co/sHqKFpeFdh#COVID19 pic.twitter.com/SsIzzFNRT0

Australia's Chief Medical Officer Brendan Murphy also dismissed Dr Hull's suggestion at a press conference on Tuesday, at least for the time being.

"Our advice is we're not at that stage," Professor Murphy said when asked about the proposal.

"If we had more sustained community transmission, then we wouldn't hesitate to make recommendations about public gatherings, schools and the like."

"We only had that one issue of community transmission in Ryde. I can imagine how the doctor would feel motivated to do more strenuous measures. But we are reviewing this every single day."

"As a government, our principle has been very clear - to take the advice of the medical experts. And those medical experts have been ahead of the curve here in Australia."

But the government has also signalled that that rolling school closures could start to happen at some point.

"School closures, I think, will become the norm as we go ahead, but we are doing everything we can to keep our children safe," Education Minister Dan Tehan said.

Public spaces in Italy have emptied this week. Source: Getty

It comes as other countries have announced more extreme measures to limit the spread of the virus.

"The right decision today is to stay at home. Our future and the future of Italy is in our hands. These hands have to be more responsible today than ever before," Prime Minister Giuseppe Conte said.

"This is a difficult decision but it is essential to maintaining public health, which takes precedence over everything," Prime Minister Benjamin Netanyahu said.