Footage has emerged of hundreds of Uighur men being shackled and blindfolded. 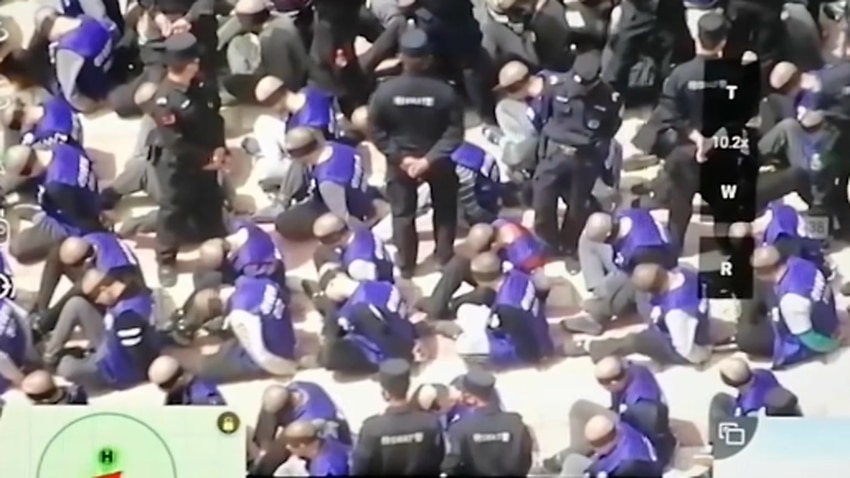 The Australian government has condemned a video which surfaced online last week showing the mistreatment of Uighurs in China.

The video shows hundreds of Uighur men, in shackles and blindfolded with their heads freshly shaved, near a train station in Xinjiang province.

In a statement to SBS News on Monday, Foreign Minister Marise Payne described the video as "deeply disturbing".

On the backs of the men in the video is the words 'Kashgar City Detention Centre'. Source: YouTube

"I think everybody who sees these images, whether they are in the political leadership of other countries or whether among the broader public, they will be horrified," he said.

"Governments like Australia will continue to raise those issues."

The footage was posted on YouTube last week anonymously by a user which calls itself "War on Fear".

The Chinese Embassy in Australia told SBS News it deplores Australia's response and has urged it to stop interfering in China's internal affairs.

The footage has been verified as authentic by Nathan Ruser, a satellite analyst at the Australian Strategic Policy Institute.

"Using open source methods and software as easily available as Google Earth, it's possible to match tens of features in the video that you see ... to the actual train station," he told SBS News.

On the backs of the men in the video is the words 'Kashgar City Detention Centre', printed in Chinese.

Mr Ruser said it's likely a reference to a prison facility in Xingjiang.

"[We've] seen the legal system and legal punishments [there] be used very much as an enforcement arm of this cultural crackdown where hundreds of thousands have been arrested on trumped up charges with very little right to a fair trial," he said.

UN experts and activists say at least a million Uighurs, and members of other largely Muslim minority groups, have been detained in camps in the remote region.

Beijing describes complexes in Xinjiang as "vocational training centres" helping to stamp out extremism and give people new skills.

Up to a million Uighurs are being held in extrajudicial detention in camps in Xinjiang, according to a group of experts cited by the UN. Source: AAP

It comes as US Secretary of State Mike Pompeo called on all countries to resist China's demands to repatriate ethnic Uighurs, saying Beijing's campaign in the region is an "attempt to erase its own citizens".

"Further on the subject of terrorism, I want to make clear that China's repressive campaign in Xinjiang is not about terrorism. It's about China's attempt to erase its own citizens ...We call on all countries to resist China's demands to repatriate the Uighurs," Mr Pompeo told reporters on Sunday.

He made the comments after a meeting with the foreign ministers of five Central Asian countries - Turkmenistan, Kyrgyzstan, Uzbekistan, Kazakhstan, Tajikistan - in New York ahead of the United Nations General Assembly this week, during which Washington is expected to confront China over the issue.