Democrats sheltered with maskless Republicans during the Capitol riot. Three of them have now tested positive

At least three Democrats who were forced to shelter in place with maskless Republicans during last week's deadly riot at the US Capitol have now tested positive to coronavirus. 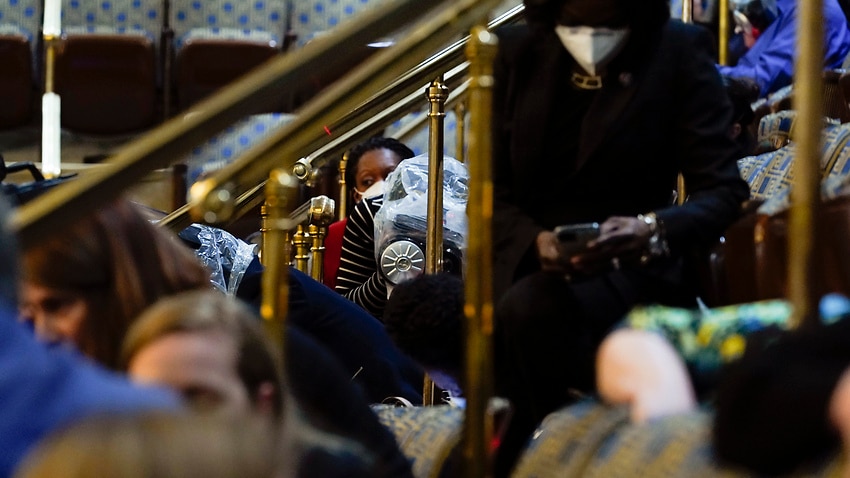 Politicians shelter as protesters try to break into the House Chamber at the Capitol on 6 January, 2021. Source: AAP

A third Democratic member of the US Congress tested positive for COVID-19 on Tuesday and lashed out at Republicans who refused to wear masks while lawmakers were sheltering from a pro-Trump mob that rampaged through the Capitol last week.

"After narrowly escaping a violent mob incited by (President Donald Trump) to attack the Capitol and its occupants, I was forced to spend several hours in a secure but confined location with dozens of other Members of Congress," Representative Brad Schneider of Illinois said in a statement.

"Several Republican lawmakers in the room adamantly refused to wear a mask... even when politely asked by their colleagues," Mr Schneider said.

Unfortunately, I received a positive COVID-19 test this morning following being tested yesterday on the advice of the House Attending Physician.

"I am now in strict isolation, worried that I have risked my wife's health and angry at the selfishness and arrogance of the anti-maskers who put their own contempt and disregard for decency ahead of the health and safety of their colleagues and our staff."

Mr Schneider warned against turning mask-wearing into a political rather than public health issue, adding that it was a gesture of "common courtesy" to put one on.

This past week we saw an attempted coup at our Capitol as well as blatant disregard for the safety of members by my @HouseGOP colleagues. https://t.co/KWJcXoEjCn

Two other Democratic representatives who were in the secure room - Pramila Jayapal of Washington state and Bonnie Watson Coleman, a 75-year-old cancer survivor from New Jersey - have also tested positive for the coronavirus.

"Many Republicans still refused to take the bare minimum COVID-19 precaution and simply wear a damn mask in a crowded room during a pandemic — creating a superspreader event on top of a domestic terrorist attack," she said.

"The duration in the room was multiple hours and several Republicans not only cruelly refused to wear a mask but mocked colleagues and staff who offered them one."

I just received a positive COVID-19 test result after being locked down in a secured room at the Capitol where several Republicans not only cruelly refused to wear a mask but recklessly mocked colleagues and staff who offered them one.https://t.co/wVmgroKsdf

Watson Coleman's office said she believes she contracted the virus while being locked down in the Capitol on Wednesday, when Trump supporters stormed the building to disrupt the certification of Democrat Joe Biden's election victory.

A conservative Republican lawmaker who was in the lockdown room, Marjorie Taylor Greene of Georgia, wished Ms Jayapal a full recovery but sought to deflect blame on the Democratic speaker of the House, Nancy Pelosi.

"Before you point fingers at me or anyone else, you need to talk directly to @SpeakerPelosi about exposing ALL of us to COVID when she called back POSITIVE COVID House members last week for votes for Speaker!" Ms Taylor Greene said in a tweet.

The United States is the world's hardest-hit country and more than 376,000 people have died from coronavirus - with about 3,000 more dying every day.