Former Prime Minister Tony Abbott says he's looking forward to the parliamentary debate on same-sex marriage, vowing to fight for 'freedom of conscience for all, not just the churches'.

"I always said this was an issue where the Australian people wanted their say and today’s result demonstrates that seeking their views was the right thing to do," Mr Abbott said on Facebook.

"I also thank the 4.7 million Australians who supported marriage between a man and a woman."

His electorate of Warringah recorded a 75 per cent Yes vote.

"I look forward to a parliamentary process that improves on the Dean Smith bill to implement same sex marriage with freedom of conscience for all, not just the churches." 'Crying in my kitchen': How social media reacted to Australia's Yes vote 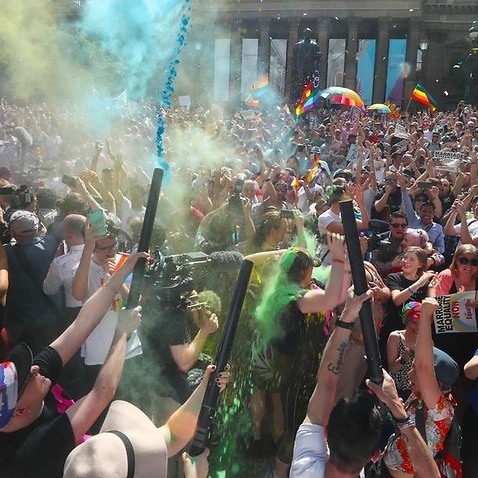 Opponents of same-sex marriage say they will fight to defend any restrictions on freedom of speech and religion as federal politicians begin work on introducing laws allowing same-sex couples to tie the knot.

Coalition for Marriage supporters were behind closed doors at a hotel in central Sydney as the Australian Bureau of Statistics announced the results from the national postal survey shortly after 10am.

Coalition for Marriage spokesman Lyle Shelton described the 61.6 per cent 'yes' vote in the voluntary survey on same-sex marriage as disappointing, but says the group will respect the decision.

"We will now do what we can to guard against restrictions on freedom of speech and freedom of religion, to defend parents' rights, and to protect Australian kids from being exposed to radical LGBTIQ sex and gender education in the classrooms," he said after the result.

Congratulations to the Yes campaign. We will be making a statement at 10:30am.

However, Liberal senator James Paterson has released rival legislation that would allow any person or business to refuse to provide services for a same-sex wedding, giving them exemptions from some anti-discrimination laws.

"The James Paterson bill is a very good bill," Mr Shelton said. "It does cover the protections at a bare minimum that are necessary to ensure that Australia remains a plural, tolerant and diverse society. Anything less than that will see basic freedoms eroded."

He said proper protections for parental rights, freedom of speech and belief should all be put in place as a result of the 'yes' vote.

"Those who seek to deceive parents or deny them information about what their kids learn in school will find themselves called to account by millions of Australian mums and dads who now know what is at stake," he said.

Applause for Lyle Shelton from the Coalition for Marriage @SBSNews pic.twitter.com/NV5eaNrJko

"Those who seek to place restrictions on freedom of speech or freedom of belief will face tough opposition from millions of Australians who understand how a change in law is used to silence those who disagree."

"Those who seek to push these ideologies through our schools and institutions will not get away with it so easily," Mr Lyle said.