A tweet by the National Rifle Association has fired up doctors to post images showing the aftermath of gun violence. 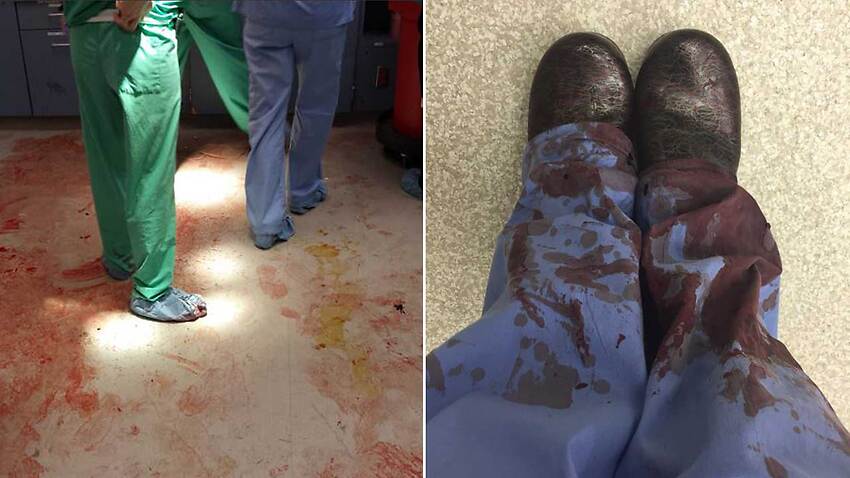 Doctors are sharing pictures of the aftermath of gun violence following a tweet by the NRA suggesting that doctors should not interfere in the gun debate. Source: Twitter: @tshane11/@kmgee9

Over 25 years in Bronx hospitals, Dr. Marianne Haughey has lost count of how many people she has seen die from gun violence. It doesn’t stop - a child who found a gun at home, a teenager caught in the middle of a gang shooting, a store owner ambushed at work.

The toughest part comes afterward, Haughey said. She sheds her blood-soaked scrubs, makes a mental note of the victim’s name and goes to tell the family.

“It’s impossible not to bring it home,” said Haughey, an emergency physician and the director at St. Barnabas Hospital's emergency medicine residency program. “I never get used to it. It’s tiresome.”

Those experiences fuelled angry responses from her and other doctors in recent days to a tweet from the National Rifle Association aimed at their profession: “Someone should tell self-important anti-gun doctors to stay in their lane.”

When Haughey saw it, she tapped out a reply on her cellphone. “I see no one from the @nra next to me in the trauma bay as I have cared for victims of gun violence for the past 25 years,” she wrote. “THAT must be MY lane. COME INTO MY LANE. Tell one mother her child is dead with me, then we can talk.”

Since the NRA posted its message Nov. 7, the heavyweight gun rights group has been flooded with more than 21,000 responses. Some replies expressed support for the group, but the bulk resembled Haughey’s remarks, and many came from those in the medical community.

Someone should tell self-important anti-gun doctors to stay in their lane. Half of the articles in Annals of Internal Medicine are pushing for gun control. Most upsetting, however, the medical community seems to have consulted NO ONE but themselves. https://t.co/oCR3uiLtS7

A neurosurgeon in Indiana shared a photo of a bloody bullet she had removed from the brain of a 6-month-old. A trauma surgeon in New Jersey posted a photo of a blue plastic chair she said she sits in when she tells parents that their child has died. An emergency care doctor in Louisville, Kentucky, sent a photo of blood covering the floor beneath an operating table.

“This one made it... not sure about the next one,” the Louisville doctor wrote. “Gun violence is a national public heath issue.”

The uproar highlighted the decades-long tension between gun-lobbying groups and researchers on the topic of studying gun violence as a public health issue. Under intense lobbying from the NRA, Congress in 1996 effectively barred the Centers for Disease Control and Prevention from researching the public health effects of gun violence. That measure, which still exists, came three years after a landmark CDC study undercut a key NRA mantra with its finding: A gun in a home does not make everyone safer.

Single GSW to the head as a drive by. Surprisingly little blood, but plenty of blood curdling screams from this middle schoolers mother when we told her that her baby was dead.

Tell me @NRA how do I get her screams out of my head 4 years later? #ThisIsMyLane #GunControlNow pic.twitter.com/4mtLC5r9Ar

The NRA’s scolding tweet to doctors this month came in a response to a position paper on firearm injuries and deaths by the American College of Physicians, which was published Oct. 30 by the medical journal Annals of Internal Medicine.

“Firearm violence continues to be a public health crisis in the United States that requires the nation’s immediate attention,” members of the American College of Physicians wrote, adding that restrictions should be lifted on gun-violence research conducted by the CDC and other government agencies.

In its tweet, the NRA suggested the journal - the peer-reviewed publication of the doctors’ group, which has about 154,000 members - and doctors involved in the paper were biased.

“Half of the articles in Annals of Internal Medicine are pushing for gun control,” wrote the gun rights group, which did not respond to a request for comment on Tuesday. “Most upsetting, however, the medical community seems to have consulted NO ONE but themselves.”

To the @NRA, this is what it looks like to stay in #mylane. We will not be silent about the toll of #gunviolence. I speak out for this patient, for their parents who will never be the same, for every person who came after this one and didn’t have to #thisiseveryoneslane pic.twitter.com/B5mo6pC4dV

“Annals of Internal Medicine is not anti-gun; we are anti-bullet holes in people,” Laine said in a statement to The New York Times. “And if we are biased, the bias is toward counseling our patients to reduce their risk of firearm injury and toward evidence-based solutions to the public health crisis that firearm injury has become.”

Many doctors shared a similar message to the NRA: For physicians who treat gunshot victims, the topic of gun policy is absolutely “in their lane.” More than 35,000 people in the United States are killed in firearm-related deaths every year, according to an annual average compiled from CDC data by Everytown for Gun Safety, a gun control group.

Dr. Robert Young, a New York psychiatrist who is the editor of the website for the group Doctors for Responsible Gun Ownership, said the NRA’s characterisation of “anti-gun doctors” is correct. He accused doctor specialty groups of holding an anti-gun bias that trickles down into their medical journals.

This is my crime scene. My ex shot me because I left him. A surgeon put my hand back together. The @NRA needs to sit down. #ThisISMyLane pic.twitter.com/fFkdkmLtmV

“Doctors are not the experts on gun safety,” Young, who is an NRA member, said in an interview. “You have to be an experienced firearms owner and have some training to know about gun safety. Physicians don’t unless they have that training.”

For years, Haughey said she struggled to understand any upside to allowing people to have guns. In heavily populated areas like the Bronx in New York City, it is too easy for an innocent person to be caught in crossfire or for someone to shoot into a crowd, she said.

But at a recent conference for medical professionals, Haughey heard another doctor speak about how her father, who lives in a rural area, was attacked and police said they could not get there soon. He used his gun to keep the assailant at bay, the doctor said.

Thank you doctors for speaking up. @NRA trying to scare people into believing they will lose their guns when all is needed are sensible gun laws. #ThisIsOurLane #ThisISMyLane @tedcruz @JohnCornyn @BetoORourke @SenSchumer #GunSenseNow pic.twitter.com/WZvsIWPJgI

Haughey said she came away with a new understanding about gun ownership and the belief that the country could find middle ground between allowing guns and banning them. And to find a resolution, she said, doctors must be included.

“We have a front-seat window view that the NRA is trying to close and say, ‘Ignore it,'” Haughey said.