Stone, 67, had been set to begin serving a 40-month prison term on Tuesday after his conviction on seven felony charges originally brought by Mueller as part of the Russia collusion probe. The charges include tampering with a witness and obstructing the House investigation into whether the Trump campaign conspired with Russia to help him win the 2016 election.

In an op-ed piece in The Washington Post on Saturday, Mueller defended his probe as being of "paramount importance," dismissing White House claims that he was out to get Trump and those who worked with him.

"Stone was prosecuted and convicted because he committed federal crimes. He remains a convicted felon, and rightly so," Mueller wrote as Democrats - and two Republican senators - piled on Trump for again intervening in the justice system to help an ally.

Senator Mitt Romney, who infuriated Trump when he became the only Republican to vote to convict the president in his impeachment trial, pulled no punches on Saturday. Roger Stone, an associate of President Donald Trump, leaves the US District Court on 14 March 2019.
AAP

"Unprecedented, historic corruption: an American president commutes the sentence of a person convicted by a jury of lying to shield that very president," he tweeted.

Another Republican senator, Pat Toomey, also criticized Trump but in milder terms, saying that as Stone has been duly convicted it was "a mistake" to commute his sentence.

Trump defended his Friday night move to commute Stone's sentence, saying Stone and others convicted of crimes in the Russia probe were caught up in a "witch hunt."

"They've all been treated unfairly, and what I did, I will tell you this: people are extremely happy, because in this country, they want justice," Trump told reporters.

"President Trump's decision to commute the sentence of top campaign advisor Roger Stone, who could directly implicate him in criminal misconduct, is an act of staggering corruption," she tweeted.

Pelosi called for legislation "to ensure that no president can pardon or commute the sentence of an individual who is engaged in a cover-up campaign to shield that president from criminal prosecution."

"I've said it before, and I'll say it again: Donald Trump is the most corrupt president in modern American history," he tweeted.

"Every day that he remains in office, he further threatens the future of our democracy. We have to vote him out this November," Biden wrote. 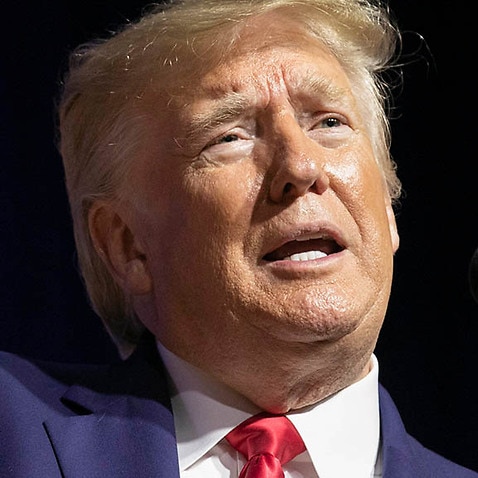 The flamboyant Stone, a longtime political activist and consultant - he even sports a tattoo of his former boss president Richard Nixon - is easily recognized by his trademark dark glasses and bowler hat.

He and Trump were introduced in the 1980s and were said to have hit it off immediately.

Trump's action instantly brought new accusations that the president has intervened freely in the US justice system to help friends and allies, and to punish critics and perceived enemies.

In a highly unusual move in May, the US Justice Department moved to dismiss its own case against Michael Flynn, a former national security advisor to Trump, though he had pleaded guilty to lying to the FBI. A federal judge has demanded a further judicial review of the matter.

Stone was the first person directly involved in Trump's campaign to receive clemency.

Indictment papers said a top Trump campaign official had dispatched Stone to get information from the WikiLeaks organization regarding thousands of emails hacked from Democratic accounts - a leak that fueled Republican attacks on Trump's 2016 opponent, Hillary Clinton.

Trump has denied knowledge of any such outreach to WikiLeaks.