Supporters of US President Donald Trump and his challenger Joe Biden faced off at polling centres around the country as the vote counting continued. 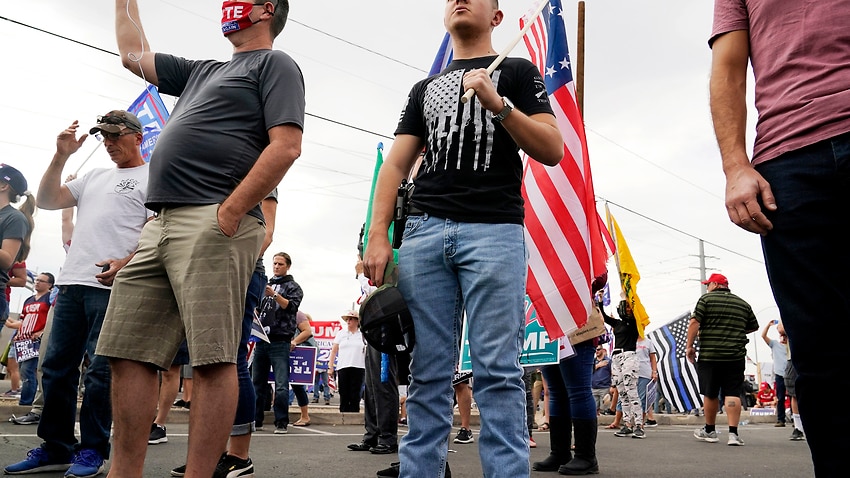 Backers of President Donald Trump, some carrying guns, ramped up demonstrations on Thursday night (local time) against what he has baselessly called a rigged election, in battleground states where votes were still being counted.

The demonstrations were largely peaceful, although Trump supporters occasionally shouted with counterprotesters. Mr Trump says the election is being stolen but there has been no evidence of fraud.

In Arizona, one of the closely contested states in the too-close-to-call race between Mr Trump and Democratic challenger Joe Biden, their supporters briefly scuffled outside the Maricopa County Elections Department in Phoenix.

A man in a face mask rallies for a fair vote count in the presidential election in McPherson Square. Source: Yegor Aleyev/TASS/Sipa USA

Local election officials continued to tabulate ballots across the country, in some cases processing an unprecedented number of mail-in ballots that accumulated as a preferred voting option during the coronavirus pandemic.

In Philadelphia, police said they arrested one man and seized a weapon as part of an investigation into a purported plot to attack the city's Pennsylvania Convention Centre, where votes were being counted.

But otherwise the scene in Philadelphia was less confrontational - festive, even - where pro-Trump and pro-Biden demonstrators were separated by waist-high portable barriers under a strong police presence.

With the future of the presidency in the balance, restive encounters also unfolded in New York and Washington as well as swing-state cities such as Milwaukee, Wisconsin; Las Vegas, Nevada; Detroit, Michigan; and Atlanta, Georgia.

On the internet, Facebook removed a fast-growing group in which Trump supporters posted violent rhetoric, as it and other social media companies tackled baseless claims and potential violence.

Supporters of President Donald Trump, engage a supporter of Joe Biden at a rally outside the Maricopa County Recorder's Office Friday, Nov. 6, 2020, in Phoenix Source: AP

Supporters of Mr Trump took their cue from the president, who has repeatedly and falsely claimed that mail-in votes are especially prone to fraud.

In Phoenix, Trump supporters briefly chased a man who held up a sign depicting the president as a Nazi pig behind a stage where right-wing conspiracy theorist Alex Jones was speaking.

Police intervened and broke up the altercation after the man and his small group of counterdemonstrators were surrounded by Trump activists.

"They are trying to steal the election but America knows what happened and it's fighting back," Mr Jones told the throng of some 300 people.

Two people wearing postal box costumes bounced to pulsating music while carrying a banner that read, "The battle isn't over." Others, backed by a live drum corps, marched behind the sign, "Union members fight to count every vote".

Trump activists waved flags and carried signs saying, "Vote stops on Election Day," and "Sorry, polls are closed." Biden backers showed their support for the civil servants who were at work inside.

"We can't allow the ballot counters to be intimidated," said Bob Posuney, 70, a retired social worker. "We're not going to create a disturbance, or get anybody hurt."

In Milwaukee, some 50 Trump supporters gathered for a "Stop the Steal" rally in front of a city building where votes were being counted, blasting country music, waving flags and carrying signs reading "Recount" and "Rigged".

At least one man had a gun in holster.

Roughly a dozen counterprotesters arrived later, shouting "Black lives matter" and "say their names," referring to victims of police brutality. Others threw eggs at the Trump supporters from a passing car.

"My country's future is what brings me out here tonight," said Mitchell Landgraf, a 21-year-old construction worker who cast his first vote in a presidential election for Mr Trump. "I'm afraid if it goes one way that this country will go downhill fast."

In Detroit, a Black Trump supporter and a Black Democratic supporter faced off for a yelling match. Earlier, police tried to separate Black Lives Matter-aligned protesters from the Trump group but soon relented, allowing them to mingle and shout at each other.

One woman carrying a holstered pistol she said she represented the Michigan Home Guard, a right-wing militia.

"I'm not going to violently burn the city down, but I'm going to continue to fight for election integrity," said Michelle Gregoire, 29, in a state where election returns showed Mr Trump with a lead on election night that turned into a Biden victory on Wednesday.

"It's not OK what they're doing in there."