While Catholics are "thrilled" with Ms Barrett's nomination, abortion advocates have voiced concern that she could cast a vote for overturning the landmark 1973 Roe v. Wade ruling legalising abortion nationwide. 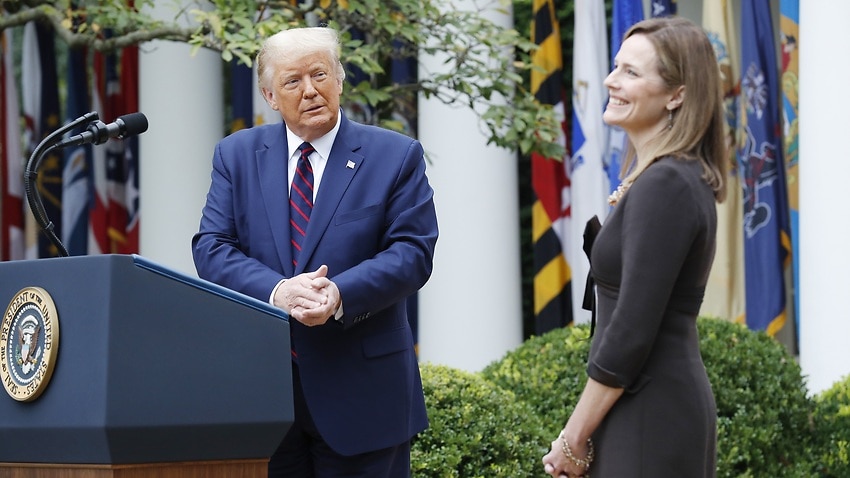 US President Donald Trump introduces Judge Amy Coney Barrett as his nominee to be an Associate Justice of the Supreme Court. Source: AAP

President Donald Trump on Saturday announced conservative appellate judge Amy Coney Barrett as his third US Supreme Court appointment, setting off a scramble in the Republican-led Senate to confirm her before Election Day in five-and-a-half weeks.

Ms Barrett, 48, appeared at a ceremony in the White House Rose Garden with Trump as he made the announcement.

"Today it is my honour to nominate one of our nation's most brilliant and gifted legal minds to the Supreme Court," Mr Trump said.

Turning to Ms Barrett, Mr Trump said that "you are very eminently qualified for the job." She and her lawyer husband have seven children, two of whom were adopted from Haiti, and they joined her at the ceremony in the White House Rose Garden.

If confirmed to replace liberal icon Ruth Bader Ginsburg, who died at age 87 on 18 September, Ms Barrett would become the fifth woman ever to serve on the top US judicial body and push its conservative majority to a commanding 6-3. With Mr Trump's fellow Republicans controlling the Senate, confirmation appears certain, though Democrats may try to make the process as difficult as possible.

Ms Barrett pledged to be a justice along the lines of the late Justice Antonin Scalia, a staunch conservative who was friends with Ms Ginsburg. Ms Barrett once served as a clerk for Scalia.

"His judicial philosophy is mine too: a judge must apply the law as written. Judges are not policy makers," Ms Barrett said.

President Donald Trump walks along the Colonnade with Judge Amy Coney Barrett to a news conference to announce her as his nominee to the Supreme Court. Source: AAP

"Judge Amy Coney Barrett is an exceptionally impressive jurist and an exceedingly well-qualified nominee to the Supreme Court of the United States," Mr McConnell said.

Democratic presidential nominee Joe Biden repeated his call for the appointment to be made by the winner of the election on 3 November.

"The Senate should not act on this vacancy until after the American people select their next president and the next Congress," Mr Biden said.

Ms Barrett was appointed by Mr Trump to the Chicago-based 7th US Circuit Court of Appeals in 2017 and is a favourite of religious conservatives, a key Trump voter bloc. Conservative activists have hailed Mr Trump's selection, which surfaced on Friday night, while liberals have voiced dismay.

Read More
'Vote him out': Donald Trump heckled as he pays respects to Ruth Bader Ginsburg

Like Mr Trump's two other appointees, Neil Gorsuch in 2017 and Brett Kavanaugh in 2018, Ms Barrett is young enough that she could serve for decades. Ms Barrett is the youngest Supreme Court nominee since conservative Clarence Thomas was 43 in 1991.

"The stakes for our country are incredibly high, rulings that the Supreme Court will issue in the coming years will decide the survival of our Second Amendment (which guarantees the right to bear arms), our religious liberty, our public safety and so much more," Mr Trump said.

"I urge lawmakers and members of the media to refrain from personal or partisan attacks" on Ms Barrett, Mr Trump added.

The White House ceremony was decorated with American flags arranged in a way similar to the day when President Bill Clinton nominated Ms Ginsburg in 1993. There was tightly packed crowd at the ceremony, most not wearing masks despite the coronavirus pandemic.

The selection kicks off a flurry of activity that must take place before the final confirmation vote, including public hearings in the coming weeks before the Senate Judiciary Committee.

An emboldened Supreme Court conservative majority could shift the United States to the right on hot-button issues by, among other things, curbing abortion rights, expanding religious rights, striking down gun control laws, and endorsing new restrictions on voting rights.

A White House source said the nominee on Tuesday will begin the traditional courtesy calls on individual senators in their offices, with Mr McConnell up first. White House Counsel Pat Cipollone is expected to shepherd the nomination.

Democrats are still furious over Mr McConnell's 2016 refusal to consider President Barack Obama's Supreme Court nomination of Merrick Garland because it came during an election year.

"Donald Trump and Mitch McConnell have made it clear they will pull out all the stops to jam through another right-wing Supreme Court nominee - even if that means breaking their own rule pertaining to election-year appointments," Democratic Senator Ron Wyden said.

Republicans hold a 53-47 Senate majority. Only two Republican senators have opposed proceeding with the confirmation process.

Jeanne Mancini, president of March for Life, an anti-abortion group, in a statement on Saturday expressed confidence that Ms Barrett "will fairly apply the law and Constitution as written, which includes protecting the most vulnerable in our nation: our unborn children."

Brian Burch, president of CatholicVote, a faith-based advocacy group, added, "Catholics are thrilled with the expected nomination of Judge Amy Coney Barrett and believe she represents the best choice to protect the rule of law and our constitutional rights."

Abortion rights groups and other liberal-leaning organizations announced plans for a protest against her nomination on Sunday in front of the Supreme Court.

Ms Barrett has staked out conservative legal positions in three years on the bench, voting in favour of one of Mr Trump's hardline immigration policies and showing support for expansive gun rights. She also authored a ruling making it easier for college students accused of campus sexual assaults to sue their institutions.

This marks the first time since 1956 that a US president has moved to fill a Supreme Court vacancy so close to an election. In that year, President Dwight Eisenhower three weeks before winning re-election placed William Brennan on the court using a procedure called a "recess appointment" that bypassed the Senate, a tactic no longer available for installing justices.