The comments came after a top US official told the daily coronavirus briefing at the White House that early research was indicating the coronavirus dies faster in warm and humid weather than in cold and drier conditions.

“Increasing the temperature and humidity … is generally less favourable to the virus,” Department of Homeland Security spokesman William Bryan said. 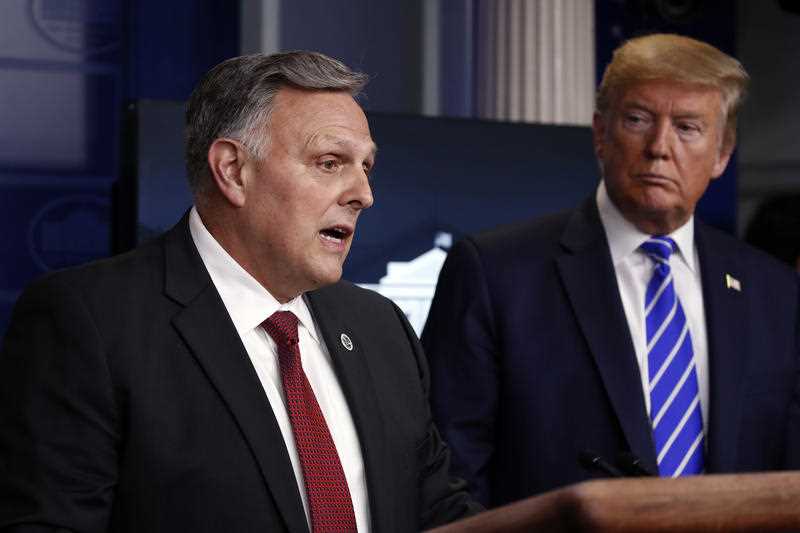 US President Donald Trump (R) listens to Bill Bryan, head of science and technology at the Department of Homeland Security (R)
AP

After Mr Bryan’s briefing, Mr Trump took to the podium to add his thoughts.

“Supposing we hit the body with a tremendous, whether it’s ultraviolet or just very powerful light ... and then I said supposing you brought the light inside the body, which you can do either through the skin or in some other way. And I think you said you’re gonna test that,” Mr Trump said, gesturing towards Mr Bryan.

“And then I see disinfectant, where it knocks [coronavirus] out in a minute and is there a way we can do something like that by injection inside, or almost a cleaning. It gets in the lungs and it does a tremendous number on the lungs.

Shortly afterwards, Mr Trump hit out at a reporter who suggested he was spreading “rumours”.

"I'm the president and you're fake news" -- Trump to @PhilipRucker after he asks him if it's responsible to make all sorts of wacky and unproven suggestions about possible coronavirus treatments pic.twitter.com/8ag4izDrGj

“People tuning into these briefings, they want to get information and guidance and want to know what to do. They’re not looking for rumours,” the reporter said.

Mr Trump replied by dismissing the reporter as "fake news".

“It’s just a suggestion … I’m here to present talent, to present ideas. We want ideas to get rid of this thing," he said. “I would caution against the injection of disinfection,” he said, laughing. “They can be toxic to people.”

“[With] ultraviolent light, I don’t know the context of which he said it, so I would need to study it before I could comment.”

Earlier this week the head of the US agency in charge of developing a vaccine against coronavirus said he was removed from his job for questioning chloroquine, a drug endorsed by Mr Trump that is yet to undergo thorough vetting.

Dr Rick Bright said he was removed on Tuesday as director of the Biomedical Advanced Research and Development Authority, the government agency for developing and procuring treatments and vaccines, and moved to a lesser position in the National Institutes of Health.

Since mid-March Mr Trump has advocated for the use of chloroquine to treat COVID-19 infections, with scant evidence from studies of its safety or effectiveness.

The US, the worst-hit country in the world, now has more than 840,000 confirmed cases of coronavirus.

The House of Representatives voted Thursday to add another nearly half-trillion US dollars to efforts to stimulate an economy ravaged by the coronavirus shutdown.

The funds will be used to support small businesses, finance hospitals and expand COVID-19 testing.