The US president has declared himself immune from COVID-19 while suggesting his Democratic rival Joe Biden could be sick. 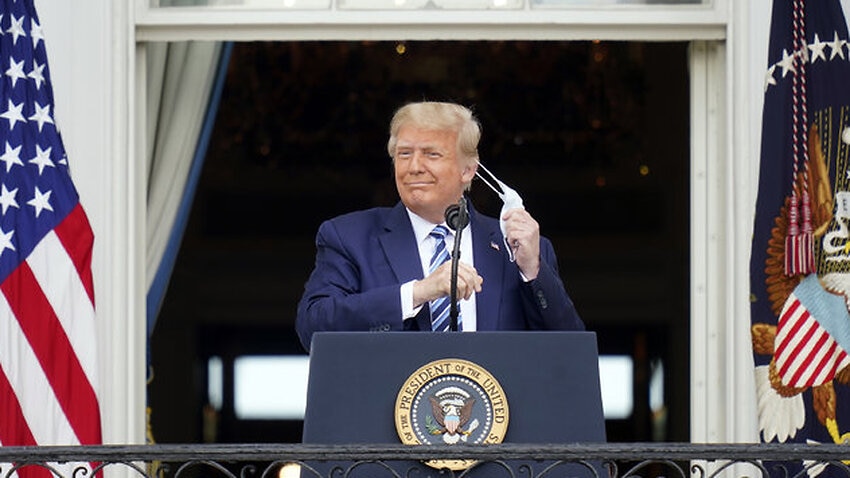 Donald Trump has tested negative to the coronavirus, his doctor says. Source: AAP

US President Donald Trump has declared himself immune to COVID-19 and ready for a fight as his White House race against surging rival Joe Biden enters its critical final weeks.

Mr Trump's doctors gave him the all-clear on Saturday to return to the campaign trail after he was ruled no longer a coronavirus transmission risk - although he has yet to be declared virus-free, and his immunity claim is unproven.

"It looks like I'm immune for, I don't know, maybe a long time and maybe a short time, it could be a lifetime, nobody really knows, but I'm immune," Mr Trump told Fox News show Sunday Morning Futures in his first TV interview since his coronavirus diagnosis.

"The word immunity means something, having really a protective glow.

"So now you have a president who doesn't have to hide in a basement like his opponent," Mr Trump added - in a jab at Democratic challenger Mr Biden, who has taken a far more cautious approach to campaigning in a pandemic.

But it is not yet clear to what degree contracting COVID-19 confers immunity, with early studies suggesting a few months while newer ones have indicated it could last longer.

Twitter on Sunday hid a tweet from Trump in which he claimed he was immune, saying the post violated its rules about misleading and potentially harmful misinformation.

A total and complete sign off from White House Doctors yesterday. That means I can’t get it (immune), and can’t give it. Very nice to know!!!

The tweet was still visible once users clicked through the warning.

Mr Trump, 74, was treated with an experimental antibody cocktail made by Regeneron that may give immunity for just a few months when taken as a treatment rather than as a vaccine.

"In some cases, vaccines can last for decades. (But) if you get it in the form of natural immunity, that isn't known yet," Regeneron CEO Leonard Schleifer told CBS's Face the Nation on Sunday.

"If you get it in our vial, if you will, that's probably going to last you for months," he said.

Badly trailing Mr Biden with just weeks until the 3 November vote, Mr Trump has been counting the days until he can hit the trail again.

The Republican leader rallied hundreds of supporters for a comeback event at the White House on Saturday, and is planning back-to-back rallies this week - in Florida on Monday, then Pennsylvania and Iowa - in a bid to salvage his struggling campaign.

During his phone interview on Fox News, Mr Trump suggested that his White House rival could himself be sick.

"If you look at Joe, he was coughing yesterday horribly and grabbing his mask, as he's coughing," Mr Trump said. "And I don't know what that was all about, and it didn't get much press."

The Biden campaign has been publishing daily coronavirus tests for their 77-year-old candidate since Mr Trump tested positive on 1 October - landing him in a military hospital for three nights and derailing his campaign.

There has been less transparency surrounding Mr Trump's own state of health, with his medical team repeatedly refusing to say when he last tested negative for the virus. That has fuelled suspicions that he may not have been tested for several days prior to his diagnosis.

COVID-19 has killed more than 214,000 people in the United States - but the president has brushed the concerns aside, insisting America has the upper hand against the virus.

But Mr Trump's message hit a bit of a snag Sunday, when top government scientist Anthony Fauci said a new reelection ad was edited to make him seem to endorse the president's handling of the pandemic.

"In my nearly five decades of public service, I have never publicly endorsed any political candidate," Mr Fauci, the longtime director of the National Institute of Allergies and Infectious Diseases, said in a statement sent to AFP.

Mr Trump defended the clip, and his handling of pandemic, and rebutted the doctor's criticism.

"They are indeed Dr Fauci's own words. We have done a 'phenomenal' job, according to certain governors," the president wrote in a tweet.

Mr Biden has slammed Mr Trump's determination to rally huge crowds during the pandemic, on Sunday tweeting: "There is no excuse for President Trump's reckless behaviour."

Barack Obama's former vice president is currently close to 10 points ahead in national polls with a solid lead in some key battleground states.