Donald Trump has been hospitalised following the news he has contracted COVID-19. Meanwhile, scrutiny is growing over his Supreme Court nomination reveal in the White House Rose Garden, as several other attendees also returned positive tests. 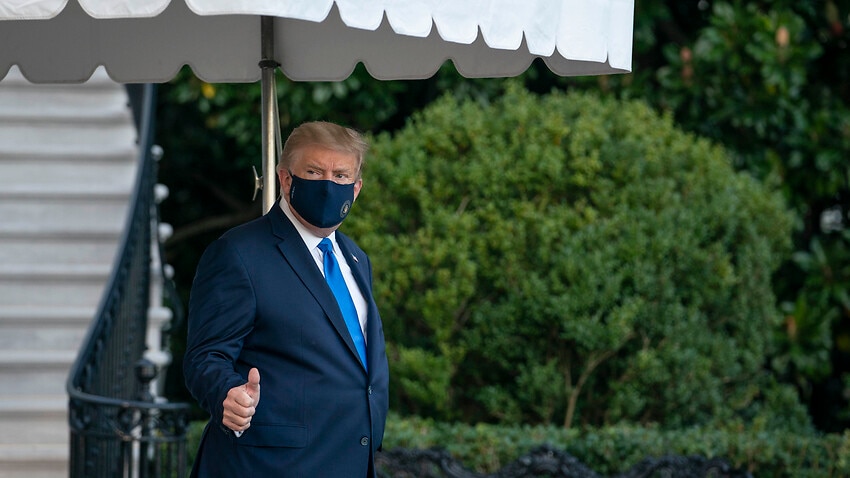 Donald Trump walks along the South Lawn of the White House before boarding Marine One Source: Sipa USA

US President Donald Trump's doctor said he is doing "very well" as he begins treatment for COVID-19 at a military hospital just outside Washington.

As a precautionary measure, Mr Trump has been moved from the White House to the Walter Reed National Military Medical Center in Bethesda, Maryland, where he will remain and work for a few days.

"At the recommendation of his physician and medical experts, the president will be working from the presidential offices at Walter Reed for the next few days," White House press secretary Kayleigh McEnany said.

In his first public comments since testing positive to the virus on Thursday night, Mr Trump said he was "doing very well”.

"I want to thank everybody for the tremendous support," he said in a short video posted on Friday to his Twitter account as he was arriving to the hospital.

"I think I am doing very well. But we are going to make sure that things work out," he said.

"Going well, I think! Thank you to all. LOVE!!" he wrote in his first tweet from hospital on Friday night.

Donald Trump says he is doing well after COVID-19 diagnosis

Earlier, the White House said Mr Trump was suffering "mild" symptoms of the virus that has killed more than 205,000 people in the country and now spread to the highest reaches of the US government.

Mr Trump is now being treated with Remdesivir, an intravenous antiviral drug, according to a letter issued by White House physician Sean Conley on Friday night.

"This evening I am happy to report that the President is doing very well. He is not requiring any supplemental oxygen, but in consultation with specialists we have elected to initiate Remdesivir therapy," Dr Conley said.

"He has completed his first dose and is resting comfortably."

While still at the White House, Mr Trump received a single dose of Regeneron Pharmaceutical's dual antibody cocktail, according to an earlier letter from Dr Conley. The 'REGN-COV2' treatment is being studied in four late-stage clinical trials but hasn't yet received any form of regulatory approval.

At that time, Dr Conley said Mr Trump was "fatigued but in good spirits", and that he was also taking zinc, vitamin D, famotidine, melatonin and aspirin.

Read More
Donald Trump has coronavirus. With the US election just one month away, what happens next?

The revelation he had tested positive, just a month before the presidential election, came in a tweet from Mr Trump at about 1am after he had returned from an afternoon political fundraiser in New Jersey.

He had gone ahead, saying nothing to the crowd though knowing he had been exposed to an aide with the disease that has infected millions in the US and killed more than a million people worldwide.

First Lady Melania Trump also tested positive, the president said, and several others in the White House have too, prompting concern that the White House or even Mr Trump himself might have spread the virus further.

The Trumps' son Barron, who lives at the White House, tested negative.

Mr Trump has spent much of the year downplaying the threat of the virus, rarely wearing a protective mask and urging states and cities to "reopen" and reduce or eliminate shutdown rules.

Underlining his sudden advantage in the bitter presidential race, Mr Biden, 77, later travelled to Michigan, going ahead with a previously scheduled campaign stop.

Mr Biden said he was praying for Mr Trump and his family, with his campaign announcing it would pull negative ads attacking the president off the air.

However, Mr Biden also implicitly criticised the president, who has mocked him for routinely wearing a face mask.

"Be patriotic," Mr Biden said. "It's not about being a tough guy. It's about doing your job."

Vice President Mike Pence tested negative for the virus on Friday morning and "remains in good health," his spokesman said.

Mr Pence took over the president's planned calls with governments, with organisers confirmed his 7 October debate with Ms Harris will go ahead as planned.

Mr Trump's former adviser Kellyanne Conway has returned a COVID-positive test, along with his campaign manager Bill Stepien, according to a senior campaign official and reported by Reuters.

Ms Conway tweeted on Friday that she has a "light cough" and was "feeling fine."

"I have begun a quarantine process in consultation with physicians," she added.

Tonight I tested positive for COVID-19. My symptoms are mild (light cough) and I’m feeling fine. I have begun a quarantine process in consultation with physicians.

As always, my heart is with everyone affected by this global pandemic. ❤️

At least three others who attended the event - Republican senators Mike Lee and Thom Tillis and University of Notre Dame President John Jenkins - have since said they also tested positive for the virus.

The White House is seen in Washington on October 2, 2020 while US President Donald Trump undergoes COVID-19 quarantine Source: AP

Mr Trump's diagnosis is sure to have a destabilising effect in Washington DC and across the world, raising questions about how far the virus has spread through the US government.

Hours before Mr Trump announced he had contracted the virus, the White House said a top aide who had travelled with him during the week had tested positive.

While House chief of staff Mark Meadows on Friday tried to assure the public that Mr Trump was conducting business as usual, even as he confirmed that the White House knew Hope Hicks, the aide, had tested positive before Mr Trump attended Thursday's fundraiser in New Jersey.

"I can tell you in terms of Hope Hicks, we discovered that right as Marine One was taking off yesterday," said Mr Meadows.

Several staffers were pulled from the trip, but Mr Trump did not cancel and there was no direct evidence that her illness was connected to his.

Read More
‘Don’t blame 5G on this:’ World reacts to Trump having COVID-19

While many White House and senior administration officials were undergoing tests on Friday, the full scale of the outbreak around the president may not be known for some time as it can take days for an infection to be detectable by a test.

Officials with the White House Medical Unit were tracing the president's contacts.

Mr Trump is the latest world leader to contract the virus.

British Prime Minister Boris Johnson was rushed into intensive care after falling gravely ill in March. Brazilian President Jair Bolsonaro called the virus a “little flu” after being infected in July. Both men have recovered.