It comes as staff around Mr Trump and his administration announce their resignations with less than two weeks before he finishes his term. 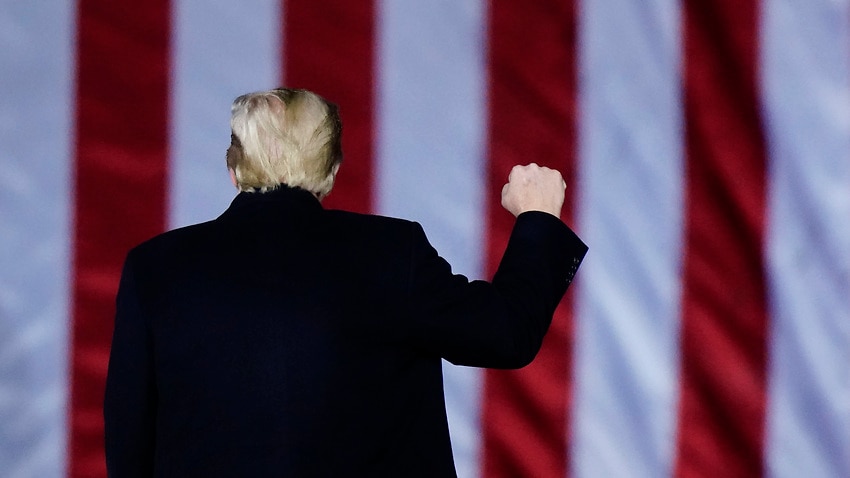 Donald Trump speaks at a rally in Dalton, Georgia on 4 January 2021 Source: AP

The top US Democrats called on Thursday for President Donald Trump's immediate removal from office after he incited his supporters to storm the Capitol in a shocking assault on the heart of American democracy.

House Speaker Nancy Pelosi said Mr Trump should be urgently removed from power, branding him "a very dangerous person who should not continue in office."

"This is an emergency of the highest magnitude," she said as she urged Vice President Mike Pence and Mr Trump's cabinet to invoke the 25th amendment.

It followed an earlier similar call from Senate minority leader Chuck Schumer, who said Mr Trump "should not hold office one day longer."

"If the Vice President and the Cabinet refuse to stand up, Congress should reconvene to impeach the president," the Democrat said.

Representative Adam Kinzinger, a Republican from Illinois, also called for invoking the 25th Amendment, which has only been used before when a president has undergone a surgical procedure.

Invoking the amendment would make Mr Pence president for the remaining two weeks the administration has in office.

A group of Democratic House politicians, led by Ilhan Omar and including Alexandria Ocasio-Cortez, separately announced they have drawn up a resolution on articles of impeachment ready for introduction.

Meanwhile, Mr Trump has used a video uploaded to Twitter to say he will focus now on "ensuring a smooth, orderly and seamless transition of power".

He also called the riot "a heinous attack" on the Capitol and said that violators would be prosecuted.

In an angry, rambling speech outside the White House before the violence, Mr Trump urged his supporters to march to the Capitol and demanded that Mr Pence, who was ceremonially leading the session to certify Joe Biden's election win, intervene to reverse their defeat.

The vice president refused, and it was ultimately Mr Pence standing before the joint session of Congress who later announced his and Mr Trump's loss.

Mick Mulvaney, Mr Trump's former chief of staff, announced following the violence he was resigning as the US special envoy to Northern Ireland and he expected others to step down.

Read More
'We want blood': How warnings of the Washington riot had been circulating online for weeks

"And I wouldn't be surprised to see more of my friends resign over the course of the next 24 to 48 hours."

Transportation Secretary Elaine Chao later confirmed she was resigning from Mr Trump’s cabinet due to the violence. Her resignation was shortly followed by that of Education Secretary Betsy DeVos.

Meanwhile a US Capitol Police officer has died of injuries sustained during clashes with the protesters, police said late Thursday.

Four protesters died, including a woman who was shot by police. Three other deaths were reported on the Capitol grounds, but the circumstances remained unclear.

Officer Brian Sicknick, a 12-year veteran of the force, was "responding to the riots on Wednesday, January 6, 2021, at the US Capitol and was injured while physically engaging with protesters," Capitol Police said in a statement.

"He returned to his division office and collapsed. He was taken to a local hospital where he succumbed to his injuries" on Thursday night, it said.