United States President Donald Trump has previously sparked controversy by refusing to commit to a peaceful transfer of power if he loses the presidential election, and with a Joe Biden victory now confirmed, the speculation is continuing.

A reporter asked: “But people are rioting. Do you commit to making sure there is a peaceful transition of power?”

Mr Trump declared victory early on election night despite several states still counting ballots. But after days of further counting, his Democratic challenger Mr Biden took the crucial battleground state of Pennsylvania meaning he would become the 46th US president. 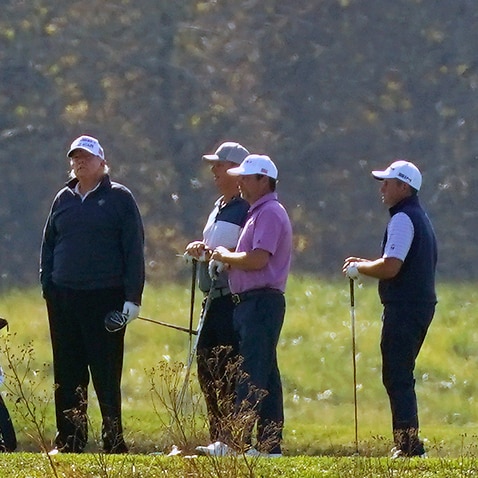 There are 12 days until Nov. 3, the last day ballots can be cast.

Happy Birthday to Christopher Lloyd! Any chance you can fire up the DeLorean and get us all out of 2020?

Oh! And! Still no basis for the conspiracy theory that #VoteByMail will lead to a rigged election. https://t.co/Z2AFqsXNF6

There are 15 days until Nov. 3, the last day ballots can be cast.

Yet to emerge from a black hole: Any basis for the conspiracy theory that #VoteByMail will lead to a rigged election. https://t.co/bshi5PfKwx

“There are two major features of VBM [voting by mail] that raise these concerns. First, the ballot is cast outside the public eye, and thus the opportunities for coercion and voter impersonation are greater,” material on its Election Data and Science Lab website reads.

America, I’m honored that you have chosen me to lead our great country.

The work ahead of us will be hard, but I promise you this: I will be a President for all Americans — whether you voted for me or not.

I will keep the faith that you have placed in me. pic.twitter.com/moA9qhmjn8