The nomination could help Mr Trump cement a key part of his presidential legacy - making the federal judiciary move conservative - while also energising his core supporters ahead of the election.

President Donald Trump plans to announce conservative federal appeals court judge Amy Coney Barrett on Saturday as his Supreme Court nominee, two sources said on Friday, as he moves to shift it further to the right and sets up a heated Senate confirmation fight with Democrats less than six weeks before the US election.

If confirmed by the Senate, which is controlled by Mr Trump's fellow Republicans, Ms Barrett would replace Justice Ruth Bader Ginsburg, a liberal icon who died at age 87 on 18 September.

Ms Barrett is a favourite of religious conservatives, a key Trump constituency, and he has asked the Senate to confirm her before the 3 November election in which he is seeking a second term and Democrats are aiming to seize control of the chamber. Ms Barrett, 48, was appointed by Mr Trump to the Chicago-based 7th US Circuit Court of Appeals in 2017. If confirmed to the lifetime post, she would become the fifth woman ever to serve on the high court while expanding its conservative majority to a rock-solid 6-3.

Her selection was viewed with alarm by liberal advocacy groups. Abortion rights groups have expressed concern that on the Supreme Court Ms Barrett could help overturn the landmark 1973 Roe v. Wade decision that legalised abortion nationwide.

Catherine Glenn Foster, president and CEO of the anti-abortion group Americans United For Life, praised Mr Trump for making a "brave and ambitious choice" and called Ms Barrett "the best and most qualified successor" to Ms Ginsburg. The other finalist mentioned by Mr Trump to fill the vacancy was Barbara Lagoa, a Cuban-American federal appeals court judge from Florida who he appointed last year and who potentially could have boosted his chances in the key election battleground state. Mr Trump said he did not meet with Ms Lagoa during a campaign trip to Florida. He met with Ms Barrett on Monday.

Mr Trump plans a formal introduction of his nominee at the White House on Saturday. Two sources, speaking on condition of anonymity, confirmed that Mr Trump plans to nominate Ms Barrett, but cautioned that he could change his mind. Mr Trump told reporters on Friday he had made his decision, but declined to reveal it. As an appellate judge, Ms Barrett has staked out conservative legal positions on key hot-button issues in three years on the bench, voting in favour of one of Mr Trump's hardline immigration policies and showing support for expansive gun rights. She also authored a ruling making it easier for college students accused of campus sexual assaults to sue their institutions.

Mr Trump's nominee has what appears to be a clear path to Senate confirmation, with Republicans holding a 53-47 majority in the chamber and only two senators in his party indicating opposition to moving forward with the process.

Democrats have objected to the Senate acting on Mr Trump's nominee in light of the decision by Republicans in the chamber in 2016 to refuse to consider Democratic President Barack Obama's nominee to replace Mr Scalia after he died during a presidential election year.

Ms Ginsburg, a champion of gender equality and various liberal causes, made history again on Friday as the first woman and first Jewish person to lie in state in the US Capitol. Democratic presidential candidate Joe Biden attended the ceremony a day after Mr Trump was greeted with jeers and boos by a nearby crowd as he visited Ms Ginsburg's flag-draped coffin outside the Supreme Court building.

"If she is nominated and confirmed, Coney Barrett would work to dismantle all that Ruth Bader Ginsburg fought for during her extraordinary career," said Alphonso David, president of the Human Rights Campaign, an LGBT advocacy group. "An appointment of this magnitude must be made by the president inaugurated in January."

Mr Trump this week said he believed the Supreme Court would be called upon to rule on the election outcome, something that has happened only once in American history, in 2000.

"I think it's very important that we have nine justices," Mr Trump said on Wednesday.

Mr Trump has repeatedly and without evidence said that voting by mail, a longstanding feature of American politics, could lead to a surge in election fraud.

On 10 November, the court is scheduled to hear arguments in a major case in which Mr Trump and fellow Republicans are seeking to invalidate the 2010 Affordable Care Act, known as Obamacare. If confirmed by then, the nominee could cast a decisive vote. 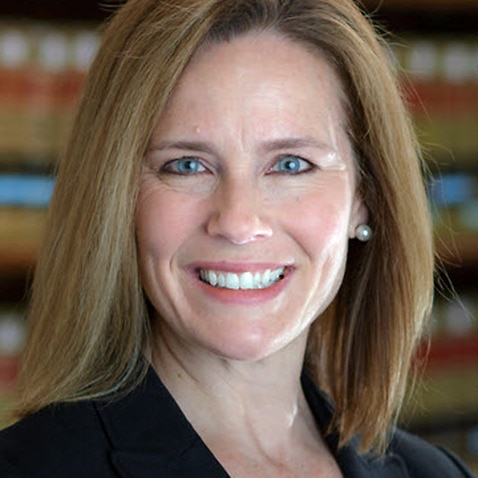 A darling of the religious right and a Cuban-American conservative: Meet Donald Trump's Supreme Court favourites

The nomination could help Mr Trump cement a key part of his presidential legacy - making the federal judiciary move conservative - while also energising his core supporters ahead of the election.

The Senate under the US Constitution is given the power to confirm or reject a president's judicial nominees. Senate Majority Leader Mitch McConnell has given a high priority to winning confirmation of Mr Trump's conservative judicial selections.