In a video message posted on his Twitter account, US President Donald Trump also blamed China for the coronavirus, vowing “China’s going to pay a big price”. 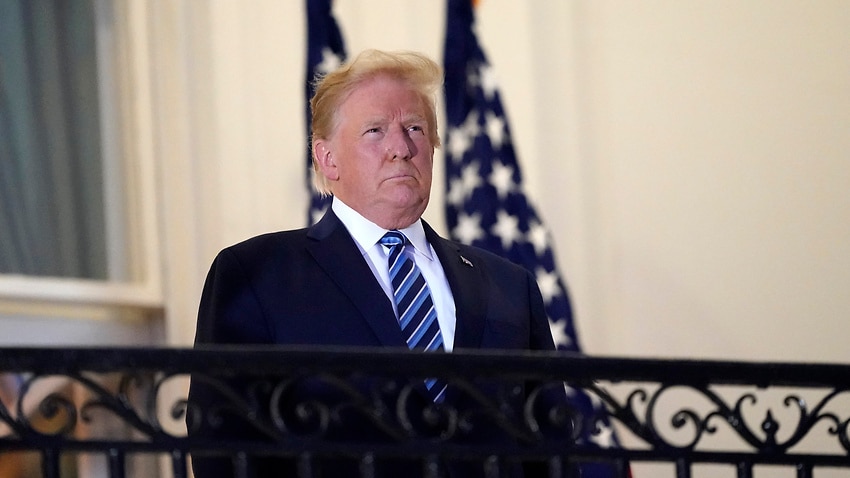 US President Donald Trump says contracting COVID-19 has been a “blessing from God” while spruiking an anti-viral drug as a "cure" for the infection.

In a video message posted on his Twitter account, Mr Trump also blamed China for the coronavirus, vowing “China’s going to pay a big price”.

Mr Trump was speaking at the White House after a short stint at Walter Reed hospital, where he had been receiving treatment for the virus.

He said he “felt great” after receiving Regeneron’s REGN-COV2, an as-yet unproven and experimental drug for COVID-19.

“I think this was a blessing from God that I caught it,” he said of the virus, in the almost five-minute long video.

“This was a blessing in disguise.”

Mr Trump said it had been his suggestion to take the drug as he vowed to make it free for all Americans.

"I just want to say we have Regeneron, we have a very similar drug from [drugmaker] Eli Lilly, and they're coming out and we're trying to get them on an emergency basis. I've authorised it.

The communications director of the House Appropriations Committee - Democrat Evan Hollander - has said it is not possible to make the drug free without new legislation.

This is all a lie. Without new legislation, the Trump administration cannot make Covid-19 treatment available for free.

If Trump & the GOP want Americans to get the care they need without bankrupting their families, they need to pass the #HeroesAct. https://t.co/kFQ0hS9qrB

Mr Trump once again hit out at China in a move that will undoubtedly fracture already tense relations with Beijing.

Earlier this year, Regeneron secured a $450 million deal with the US government for tens of thousands of doses of the antiviral drug.

Regeneron at the time said the US government would make the doses free for Americans once approval had been granted.

Mr Trump has ties to the CEO of the company, Leonard Schleifer, who is a member of the President’s golf club in New York.

He had once owned shares in Regeneron, according to CNN, which obtained Mr Trump's 2017 filing with the U.S. Office of Government Ethics.

He also owned stock in the maker of the drug remdesivir, which he also received while undergoing treatment for coronavirus.