Donald Trump thinks Cuban Americans are one of his secret weapons. Here's what they say

Florida is once again set to play a decisive role in the US election, and while Democrats normally enjoy a healthy lead there among Hispanic voters, Cuban Americans are the exception. 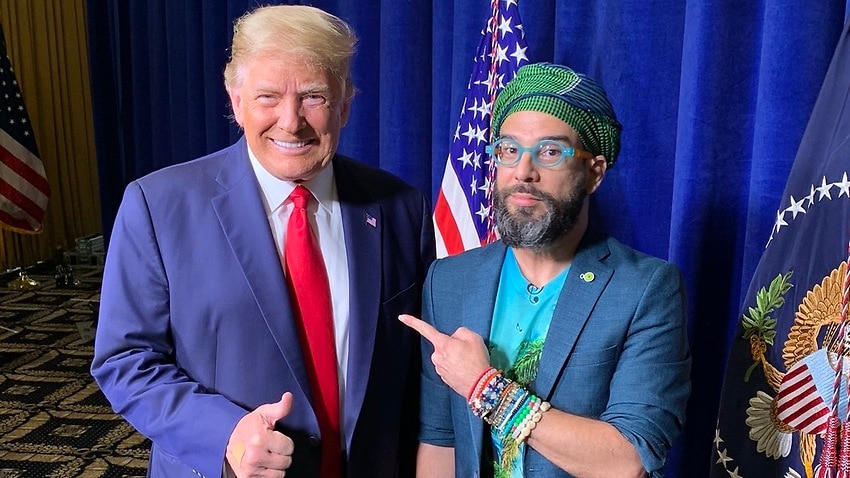 Alex Otaola is playing with his pet monkey. A few hours earlier he was interviewing the President of the United States. In a few minutes, he’ll be hosting a three-hour online broadcast.

Such is a day in the life of the man turning a new generation of Cuban Americans towards Donald Trump.

“I have influenced young Cuban Americans, especially those who have come here from Cuba since 1995,” the 41-year-old tells SBS News.

Mr Otaola left Cuba in 2003 and now lives in Miami, Florida. He was a registered Democrat and voted for Hillary Clinton in 2016 but became disillusioned with the party, believing it had drifted too far to the left.

Now, he’s the Trump campaign’s secret weapon in Miami ahead of the 3 November poll. He’s a true believer in the MAGA cause.

“I think he's doing well. He's delivering on what he promised. And he’s the only president of the United States that has been able to stop the Cuban dictatorship making money,” he says.

Mr Otaola broadcasts three hours a day, five days a week. His videos average around 100,000 views. The show is a mix of conservative political commentary, discussion of human rights in Cuba and comedy. Democratic challenger Joe Biden and his supporters are frequently the punchlines to his jokes.

His five-minute interview with Mr Trump, in which the president thanked him for his support, was a sign of how highly the campaign values his influence, particularly when it comes to migrants.

Read More
Meet the Americans who could be about to make Congress less 'stale, pale and male'

The 2020 Florida International University Cuba Poll, which surveys Cuban Americans in Miami, found 76 per cent of those who arrived in the US between 2010 and 2015 report registering as Republicans.

There are a record 32 million Latin Americans registered to vote in the US this year, according to Pew Research. In 2018, 1.4 million Cuban American voters were eligible to vote and the Cuba Poll says in 2020 an estimated 697,785 of them are registered in Florida.

Older Cuban Americans have always been a reliable source of Republican support.

Fernando Morales is smoking a cigar outside his shop in Miami’s Little Havana.

The 51-year-old fled Cuba with his family 30 years ago. Like many in his generation, life under the Castro regime shaped his political outlook.

“The other side is very socialist, we are very anti-socialist, that’s the reason we are here,” he says. “We all loved the island, but we were forced to leave because of the socialist structure.”

Read More
They fled Venezuela for a better life. Now coronavirus lockdowns have forced these migrants to return - on foot

But a new generation of Cuban Americans, born in the US, is thinking differently.

Mike Ortiz is a 31-year-old entrepreneur selling high-end teas in Miami. He’s backing Mr Biden and thinks most of his friends will too. But he understands why many of those who fled Cuba, like his father, will not consider voting for a Democrat.

“The original rhetoric of the Cuban revolution; ‘we’ll give you healthcare, we’ll give you education,’ has led to a point now, because of the trauma they experienced, that it’s like an abused dog. If you go to pet them, the dog is terrified,” he says.

“If you say to most of the Cuban community, ‘I think people need healthcare’, they’ll react like someone’s about to hit them. If you say the word revolution, they’ll kick you out of their house.”

The Trump campaign has been filling the local airwaves with Spanish language commercials, equating Mr Biden with leaders like Fidel Castro and Hugo Chavez.

“If that’s the guy that’s going to turn us into Venezuela, dude, all bets are off. I mean come on, this is Joe Biden.”

Democrats understand there are some Cuban Americans they’ll never reach.

“The generation that came in the early 60s, they lost the most, they lost families, so they’re the ones who will never vote Democrat,” says Maria-Elena Lopez, a local Democratic activist.

“[President John F.] Kennedy handed over Cuba to Castro and Russia, and so the pain is still there.”

Their hope is that younger voters will focus on policies broadly supported by Latin Americans, such as immigration reform, rather than the politics of the past.

Mr Biden will almost certainly win the Latin American vote overall in Florida, but every Cuban American vote for Mr Trump will help reduce the margin.

In a state he won by just 1.2 per cent in 2016, votes from Little Havana could make a big difference.