President Donald Trump has voted early in Florida, joining 54 million Americans who have cast early ballots before the election.

President Donald Trump voted in his adopted home of Florida before hitting the campaign trail for rallies in three swing states on Saturday, joining more than 54 million Americans who have cast early ballots at a record-setting pace ahead of the 3 November election.

Mr Trump cast his ballot at a library in West Palm Beach, near his Mar-a-Lago resort, after switching his permanent residence and voter registration last year from New York to Florida, a must-win battleground for his re-election bid.

“I voted for a guy named Trump,” he told reporters after voting. Democratic rival Joe Biden also hit the campaign trail on Saturday, speaking at a drive-in rally of supporters in the battleground state of Pennsylvania where he warned of a looming “dark winter” unless the Trump administration does not do a better job at fighting the coronavirus.

With 10 days to go in the campaign, about 54.2 million Americans have already cast early ballots, a pace that could lead to the highest voter turnout in more than a century, according to data from the US Elections Project. Mr Trump has regularly condemned mail-in voting without evidence as prone to fraud, even though experts say it is as safe as any other method. He voted by mail in two elections since he switched his address to Florida.

The large number of early voters is a sign of the intense interest in this year’s election, as well as concerns about avoiding crowded polling places on Election Day and reducing the risk of exposure to the coronavirus, which has killed more than 224,000 Americans.

The United States set a single-day record of more than 84,000 new COVID-19 cases on Friday, according to a Reuters tally, with the spike in infections hitting election swing states Ohio, Michigan, North Carolina, Pennsylvania and Wisconsin. Many states have expanded in-person early voting and mail-in ballots as a safer way to vote during the pandemic.

Mr Biden addressed supporters in Bristol, Pennsylvania, gathered in pickup trucks or cars, many with their windows or sunroofs down.

“It’s going to be a dark winter ahead unless we change our ways,” he said of Mr Trump’s attempts to contain the coronavirus, which has killed more people in the United State than any other country. 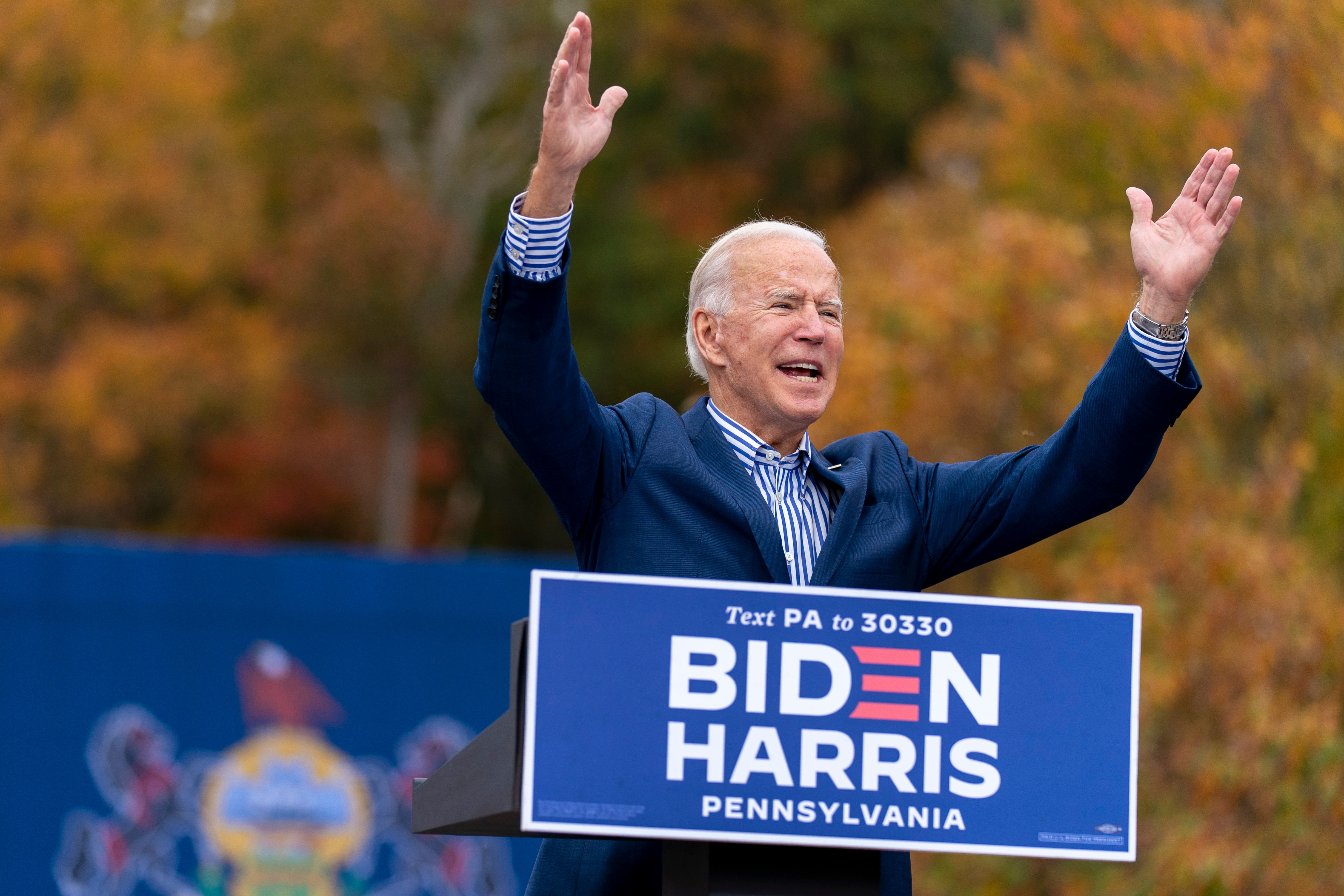 Mr Trump has accused Mr Biden of overstating the health crisis to scare Americans into voting for him.

Opinion polls show Mr Biden leading Mr Trump nationally, but the race is much closer in the battleground states that will decide the election. Mr Trump will head to three of those after voting, holding rallies in North Carolina, Ohio and Wisconsin.

In Pennsylvania, polls show Mr Biden narrowly leading. A Reuters/Ipsos survey released earlier this week showed Biden with a four-percentage point advantage over Mr Trump in the state, down from seven points the week before.

Mr Biden will get some help again on Saturday from former President Barack Obama, who will hold a drive-in rally in Miami.

Mr Obama, still popular in the party nearly four years after leaving office, delivered a blistering attack on Mr Trump’s leadership when he made his 2020 campaign-trail debut in Pennsylvania on Wednesday.