Donald Trump will face his second impeachment trial this week. Here's how it could play out

Former United States president Donald Trump will soon face his second impeachment trial in the Senate - this time, not as a president but a citizen. 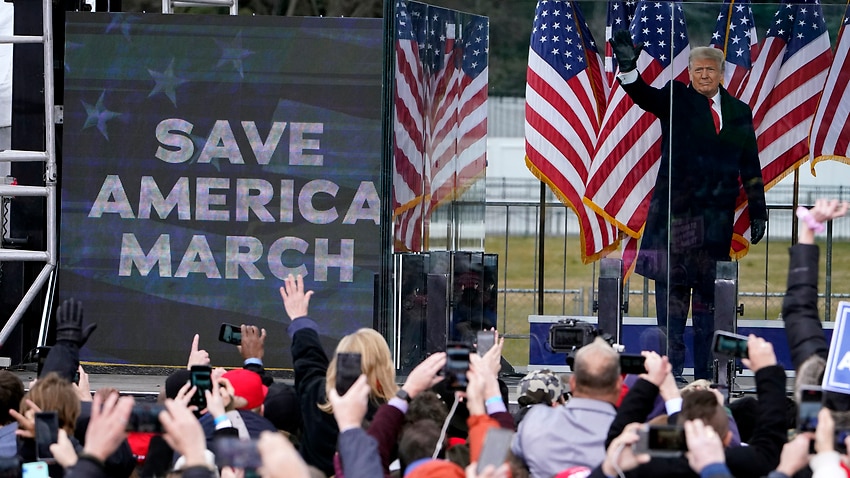 Former US president Donald Trump speaks to his supporters at a rally on 6 January. His supporters later stormed the Capitol building. Source: AAP

One year after his first impeachment, former United States president Donald Trump finds himself the subject of an unprecedented second trial in the Senate, whose members must determine whether he incited a deadly assault on the nation's Capitol.

The 100 senators will also step into uncharted territory on Tuesday, local time, when they sit in judgment of a president who is no longer in office, a deeply damaged political figure who remains a potent force in his party even without the power of the White House.

At the heart of the coming week's high-stakes proceedings is the 6 January attack, when several hundred pro-Trump rioters stormed Congress, fought police and sought to stop the ceremonial certification of Joe Biden's election victory.

The uprising, which some Democratic politicians say was an attempted coup by domestic terrorists, has been described as the most dangerous attack on American democracy since the 1860s Civil War.

Supporters of Donald Trump climbing the west wall of the US Capitol in Washington during the 6 January riot. Source: AP

It left members of Congress - who were ruthlessly targeted by the insurrectionists - so shaken, and the nation so enraged, that Democrats began the process of impeaching Mr Trump just two weeks from the end of his term.

On 13 January, the House of Representatives indicted him for "incitement of insurrection," forever branding Mr Trump a twice-impeached president. No other commander-in-chief has been so disgraced.

Yet no US president has ever been convicted in a court of impeachment and the odds are that such a record will stand.

A principal goal of Democrats driving the trial would be to ban Mr Trump from holding federal office in the future, should they win an unlikely conviction.

The mob riot itself is beyond dispute. US networks covered the mayhem live, and thousands of self-incriminating photographs and video clips - including of some rioters insisting Mr Trump "wants us here" storming the Capitol - made their way into the world's news media.

Critics aver that Mr Trump's role was such that he violated his oath of office by inciting his supporters to launch the attack.

The Republican billionaire and his allies, however, argue that the trial itself is unconstitutional, saying the Senate can convict and remove from office a current president but not a private citizen.

"If it happened in the Soviet Union, you would have called it a show trial," Republican Senator Bill Cassidy said on NBC.

The claim of unconstitutionality could allow the defence team and Republican senators to avoid having to defend the fiery tweets and diatribes by Mr Trump in the run-up to the violence.

House Speaker Nancy Pelosi, who put together a team of nine Democrats to serve as impeachment managers prosecuting Mr Trump, insisted the trial should go on, and that failing to convict him would damage American democracy.

"We'll see if it's going to be a Senate of courage or cowardice," Ms Pelosi told reporters on Thursday.

How it could play out

Convicting Mr Trump would require the vote of more than two-thirds of the senators, meaning 17 Republicans would need to break ranks and join all 50 Democrats - a feat seen as near impossible.

But the former real estate mogul has plenty to lose in the trial.

Even though Mr Trump retains a strong base of support, the riot has eroded his popularity - not good for a 74-year-old who may eye a fresh presidential run in 2024.

Public support for a Mr Trump conviction is stronger now than during his first impeachment trial, according to a new Ipsos/ABC News America poll that found 56 per cent of Americans favouring conviction to 43 per cent who disagreed.

Donald Trump boards Marine One as he leaves the White House on 20 January. Source: AAP

In a pre-trial brief the impeachment managers set the tone, accusing Mr Trump of "creating a powder keg, striking a match, and then seeking personal advantage from the ensuing havoc".

They also signalled their intention to use many of Mr Trump's own public statements against him, including his 6 January pre-riot speech to a crowd of followers near the White House urging them to "show strength".

"You'll never take back our country with weakness," Mr Trump said, urging them to "fight like hell" before his audience marched the short distance to the US Capitol.

Defence lawyers focused on two points: that the trial is "moot" because Mr Trump cannot be removed from an office he no longer holds, and that his rhetoric casting doubt on the election results and his combustible 6 January remarks amounted to constitutionally protected speech.

The parameters of the trial have yet to be set, while Democrats' invitation to have Mr Trump testify was shot down by the ex-president's team.