More than 60 million Americans already have cast ballots ahead of the 3 November election in a record-breaking pace that could lead to the highest US voter turnout by percentage in more than a century.

With eight days until the US election, President Donald Trump on Monday wooed voters in Pennsylvania, a battleground state he won in 2016 and is crucial to his chances of defeating Democratic challenger Joe Biden and winning a second term.

“We win Pennsylvania, we win the whole thing,” the Republican president told cheering supporters in Allentown, predicting victory in a state where opinion polls show is he trailing Biden.

More than 60 million Americans already have cast ballots ahead of the 3 November election in a record-breaking pace that could lead to the highest US voter turnout by percentage in more than a century.

Surging coronavirus cases in many parts of the country and a COVID-19 outbreak within Vice President Mike Pence’s staff have kept the focus of the race on the pandemic.

Mr Pence, due to campaign in Minnesota on Monday after an appearance in North Carolina on Sunday, tested negative for the coronavirus on Monday, his office said, after multiple senior aides tested positive over the weekend. Despite Mr Biden’s solid lead in national opinion polls, the contest appears tighter in the most critical battleground states that could decide the outcome.

A state where voters can swing toward either major party, Pennsylvania has been heavily courted with frequent visits by both candidates. Mr Trump was due to speak later in the day in Lititz and Martinsburg. He also planned multiple stops in Michigan and Wisconsin this week, as well as visits to Arizona, Nebraska and Nevada.

Mr Biden, born in Pennsylvania, has made a victory in the state a critical part of his own strategy. Mr Trump told reporters he expects to win Pennsylvania by a larger margin than the narrow one he achieved in defeating Democrat Hillary Clinton in 2016.

Addressing supporters, Mr Trump touched on what he called “an existential” issue for Pennsylvania, Mr Biden’s comment during last week’s presidential debate that if elected he would “transition” the United States away from oil and natural gas. 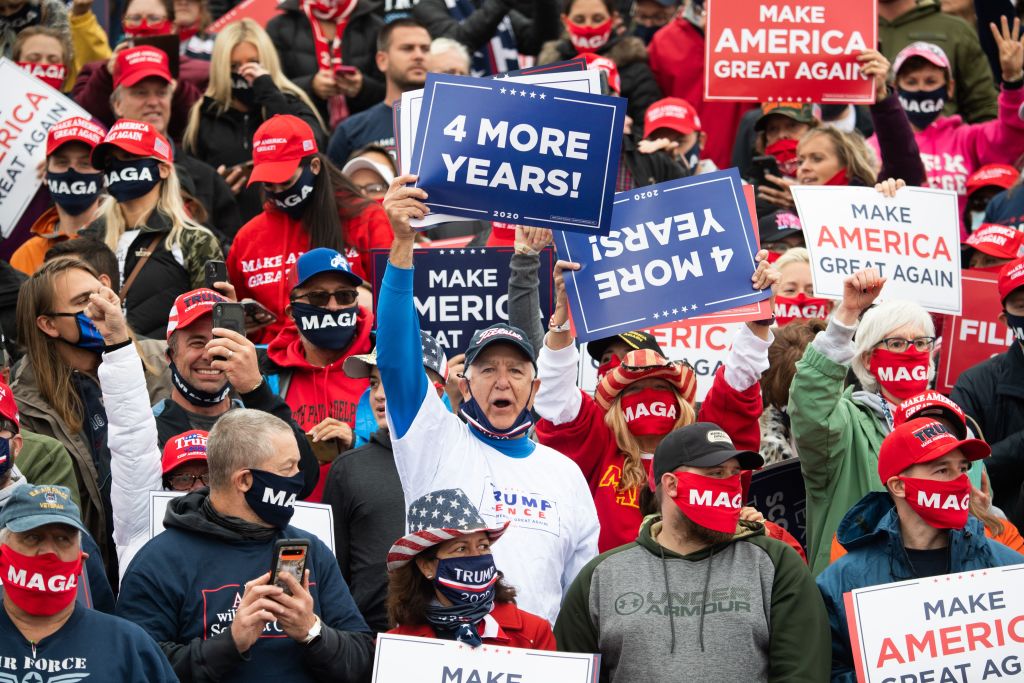 “He wants to go with windmills that are made in Germany and China,” Mr Trump said, adding, “Biden’s plan is an economic death sentence for Pennsylvania’s energy sector".

Mr Biden will be aided in Florida with an appearance in Orlando on Tuesday by former President Barack Obama, under whom he served as vice president.

Record numbers of new U.S. COVID-19 cases in recent days have offered Mr Biden’s campaign a chance to remind voters of how Mr Trump and his allies have played down the advice of public health experts to wear masks and observe social-distancing guidelines to battle the pandemic.

Mr Biden on Sunday accused Mr Trump of surrendering to the virus that has killed about 225,000 people in the United States.

Mr Trump lashed out at Mr Biden on Monday, calling him “a pathetic candidate” while again asserting that his administration was “doing a great job” against the pandemic and saying again that the United States was “absolutely rounding the corner.”

White House Chief of Staff Mark Meadows said on Sunday that the administration was “not going to control the pandemic,” and was instead focused on vaccines and therapeutics. Mr Trump on Monday disagreed with Mr Meadows, saying he had not given up trying to control the pandemic - “absolutely the opposite” - and accused the news media of focusing on the public health crisis to hurt him politically. As he has with other Democratic state governors, Mr Trump assailed Pennsylvania’s Tom Wolf as a “clown” for policies aimed at curbing the spread of the virus.

“We will vanquish the virus, we will overcome the pandemic and we will emerge better and stronger than ever,” Mr Trump told the Allentown crowd.

In Allentown, Mr Trump won cheers from supporters when he touted his nomination of conservative appellate judge Amy Coney Barrett to the Supreme Court. The Republican-led Senate was expected to confirm Ms Barrett to the lifetime job later in the day, with the White House planning a celebration Monday evening. A similar 26 September event when Mr Trump named Ms Barrett as his nominee has been linked to a COVID-19 outbreak at the White House. 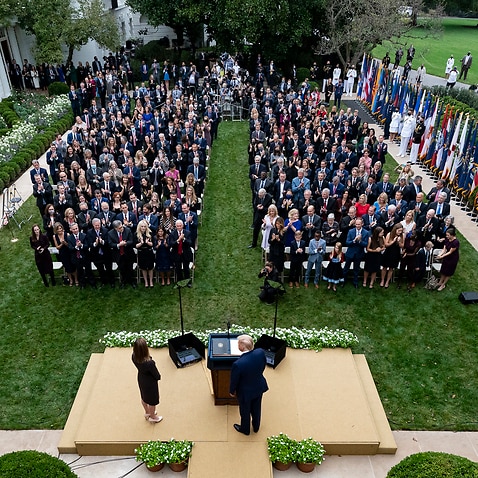 Is this the event that caused coronavirus to start surging through the White House?

Brisk early voting has led Michael McDonald, the University of Florida professor who administers the US Elections Project, to predict a record US voter turnout of about 150 million, representing 65 per cent of those eligible to vote, the highest rate since 1908.

US voters already have cast more early votes during this presidential campaign - 60.5 million - than they did in all of 2016 when they passed the 47 million mark earlier this month, data shows.