An "army" of door knockers will hit the streets in Melbourne's coronavirus hotspots to ensure the health advice is getting through. 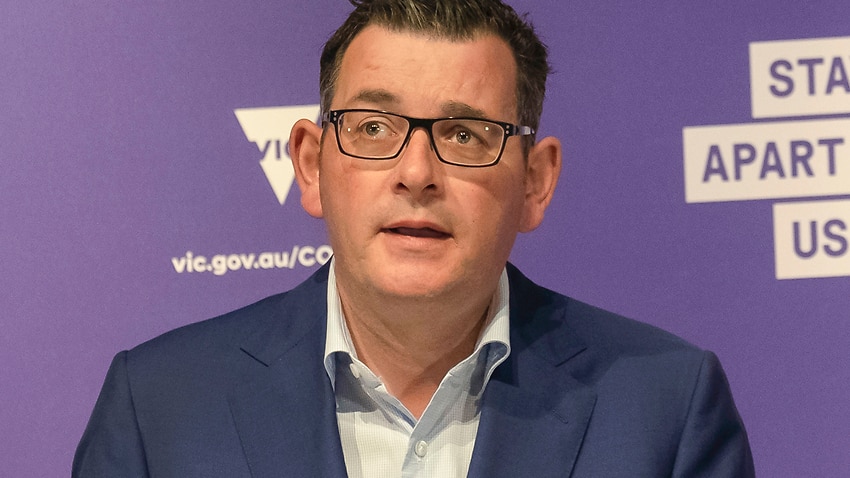 As coronavirus cases continue to climb in Victoria, the state is deploying doorknockers to ensure residents are doing the right thing. Source: AAP

As Victoria continues to record new coronavirus cases, authorities are deploying "an army of people" to door knock residents in COVID-19 hotspots to ensure they are doing the right thing.

Some restrictions are also being reimposed and police have been granted permission to issue on-the-spot fines to people breaking coronavirus-related restrictions.

The measures come as Victoria recorded double-digit growth in new coronavirus cases for the seventh day in a row.

More than half of the state's new cases since the end of April have come from family members spreading it to their relatives.

Read More
Victoria's coronavirus outbreak: not quite a second wave, but still cause for concern

Due to ongoing community transmission, Mr Andrews said there will be an “army” of people door knocking from Wednesday.

The team will hit the streets in the six local government areas identified as COVID-19 hotspots. These areas are the Melbourne municipalities of Brimbank, Cardinia, Casey, Darebin, Hume and Moreland.

The team will provide residents with additional information about the virus and remind them to get tested and to stay home if feeling unwell.

"They will do that job in providing public health advice and making sure that everybody, where language and other issues like that, won't be a barrier,” Mr Andrews said.

"I would encourage people, if you get that door knock, take the time to have a conversation with the dedicated public servant who is going to speak to you."

Mr Andrews admitted that a small number of people in the state who tested positive pretended they did not.

"Please do the right thing - if you don't, then every single Victorian will pay a really significant price for that," he said.

Victorian Chief Health Officer Brett Sutton said Victorians should think hard before leaving affected areas or travelling into them, but they were not in lockdown.

"For the purpose of protecting our interstate jurisdictions, we really need to say, look, reconsider travel or don't make plans to travel into these hotspot areas," he told reporters on Tuesday. ‘

Victoria has pledged to increase its efforts to provide in-language coronavirus support as Melbourne works to contain the spike in cases.

The state government has said the recent surge in cases has been from large family gatherings.

Because of this, the state will prioritise testing people in those identified hotspots and increase messaging to Victorians with diverse backgrounds.

"We want to make sure that everyone in the state understands the public health messaging,” Health Minister Jenny Mikakos told a press conference on Monday.

“We acknowledge the challenges in some communities for whom English may not be their first language in understanding the public health messaging, and this is why we are going to double our efforts in working with those communities.”

The Federation of Ethnic Communities’ Councils of Australia (FECCA) told SBS News on Wednesday they acknowledge the efforts by governments to translate messaging, but more needs to be done.

"We know that the federal government is translating COVID-19 health advice into about 60 languages, which is important and should continue,” FECCA’s chairperson Mary Patetsos said.

"The problem is that these documents sit online on a department website and are only accessible if someone goes looking for them.

"We need to make sure this information is culturally appropriate, accessible and presented in an understandable format to all communities in Australia, including new and emerging migrant communities that may not have excellent English language skills.

Victoria will prioritise testing people in those identified hotspots and increase messaging to Victorians with diverse backgrounds. Source: AAP

Ms Patetsos said more than 20 per cent of Australians speak a language other than English, and all languages spoken in Australia should be considered in coronavirus messaging.

“We are not talking about an insignificant number of people, there are over 300 languages spoken in Australia,” she said.

"Governments should utilise organisations like FECCA, and other peak representative bodies in this space, and consult with them early to determine the most effective ways to engage with culturally and linguistically diverse communities.

"Representative organisations like FECCA, which have close and deep connections to communities, can also help disseminate information to communities if we are engaged early on in the process."

In order to suppress the growing number of COVID-19 cases in Victoria, the state has reimposed some restrictions - including reducing the number of visitors allowed in homes from 20 to five.

Mr Andrews said the restriction on family gatherings was reinforced because people were not listening to the government’s health warnings.

“We have seen many families, large families, who have gathered in numbers beyond the rules,” he said.

Outside gatherings for family and friends have also seen restrictions reimposed, with groups limited to 10 people.

The 20-person limit will remain in gyms, cinemas, theatres, concert venues, and auditoriums.

Private worship or small religious ceremonies will be limited to 20 people plus those reasonably required for the ceremony.

Restaurants, bars and cafes were set to up their capacity from 20 to 50 next week, but the recent outbreaks have put this on hold until at least 12 July.

There will be a 20-person limit per indoor space in galleries, museums, national institutions, historic sites, outdoor amusement parks, zoos, and outdoor arcades.

Indoor sports centres and venues can open with up to 20 people per space, with changing rooms and showers also opening.

Shared facilities at camping and tourist accommodation can open, with increased screening and safeguards in place.

Indoor play centres and toy libraries can open with 20 people per space.

Sports for kids and non-contact sports for adults have no new restrictions, being free to resume.

Health Minister Jenny Mikakos said on Monday the government isn’t ruling anything out, including the possibility of tightening restrictions further – which could include reintroducing stay-at-home directions in certain local government areas including identified hotspots.

Victorian police are able to once again issue on-the-spot fines for people breaking coronavirus restrictions without seeking permission from a superior – something which had ceased mid-May.

Police Minister Lisa Neville said state officers have been asked to issue fines if people are gathering in groups larger than 10 outside and if a home has more than five visitors.

"They can issue them on the spot. They will still be checked at the other end. But [we're] really sending a very strong message that police need to strongly enforce those directives," Ms Neville said on Tuesday.

Officers will focus their attention on the six local government areas considered as hotspots for the virus.

On Monday, state officers carried out 624 spot checks. Out of those, 170 checks were ensuring people were supposed to be self-isolating were at home.