A driver and another worker have been killed after the Sydney to Melbourne XPT train derailed at Wallan, north of Melbourne.

A train driver and another worker have been killed in a terrifying train derailment north of Melbourne.

Authorities say it's a miracle more people weren't killed when the Sydney to Melbourne XPT diesel locomotive and five carriages came off tracks near Wallan Station, 45km north of the city on Thursday evening.

Police confirmed early Friday morning that the male driver had been killed.

There were 153 passengers on board.

A man in his 60s was taken to the Royal Melbourne Hospital in a stable condition with an upper-body injury while 11 others were taken to local hospitals with minor injuries.

The engine and the first carriage off the train tipped onto their sides while others are leaning off the wrecked tracks. 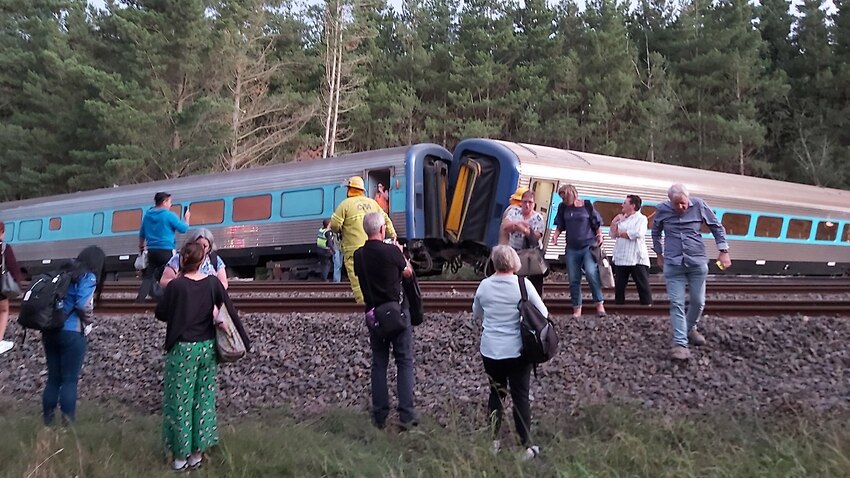 A driver and another worker have been killed after the Sydney to Melbourne XPT train derailed at Wallan, north of Melbourne.
Twitter - Rickard_Scott

"I imagine as a first responder who turned up it would have been looking like a horrific scene," Acting Inspector Peter Fusinato said.

There are reports one man was injured while trying to save the driver, and Insp Fusinato said he expected further stories of bravery would emerge. About 20 people remain unaccounted for and police have asked people who left the scene without speaking to emergency services, or who bought tickets but didn't board the train, to get in touch.

Shaken passengers were bussed to Melbourne after the crash, while others were picked up by family.

A Sydney couple who were on their way to visit their son in Melbourne said the crash and its aftermath were terrifying. They've cancelled their return trip.

"You just hang on for grim death. You're being thrown around, the thing's going along tilting over and all you can look out the window and just see dirt and debris and stuff flying up past the windows and the track itself is just twisted and bent," the man said. A driver and another worker have been killed after the Sydney to Melbourne XPT train derailed at Wallan, north of Melbourne.
Dr Scott Rickard / Twitter

"It probably went about 150 metres before it stopped, there were carriages going sideways - pretty horrifying."

The woman said her thoughts were with those who had died.

"We're very sad about that. Two people who went off to work this morning and never went home," she said.

The man revealed train staff had handed out complaint cards to passengers moments before the derailment, after lengthy delays caused by ongoing problems with signals on the line.

He walked back to the site of the initial derailment and said it looked like switches on the track appeared to have directed the train off the main line.

The train, which had left Central Station in Sydney at 7.40am, had been due to arrive at Southern Cross Station in Melbourne at 6.30pm.

Shocking scenes at Wallan. I’ve been sent this video that shows the aftermath of the passenger train derailment @theage pic.twitter.com/ry6v9YCv0N

It was running more than two hours late at the time of the crash.

The track buckled and both carriages shifted at least 10 metres from their normal trajectory.

A crime scene has been established. Investigations have begun and will involve the National Rail Safety Regulator, Australian Transport Safety Bureau and WorkSafe and are expected to take some time.

It could be days before the trains can be removed from the tracks, which also sustained significant damage.

The Australian Rail Track Corporation is in charge of rail maintenance, while the train is managed by Transport for NSW.

Queen Elizabeth says 'we will succeed' against coronavirus