Australia's first on-road trial of driverless cars has been completed in Adelaide, providing a glimpse into the future.

We're cruising down the expressway at a sprightly pace, swallowing up the road below, when it clicks: no one is holding the steering wheel.

I imagine crunching steel, popping glass, the car taking off like a kite.

But instead something incredible happens.

The steering wheel adjusts itself, as if taken by a ghost, and the car glides along in its lane.

I am in a self-driving Volvo XC90, the first autonomous car to be trialled on an Australian road.

"We have it set at 70km/h," the Volvo Safety Centre's Trent Victor says from the driver's seat.

Except it is not at all - not yet, anyway.

Our clever car presses its own brakes when the support vehicle ahead slows down.

Then when the car in front pulls away, we accelerate back up to speed without Mr Victor lifting a finger.

"This is an experience of what it will be like in 2017," he says, referring to Volvo's plan to roll out 100 of these cars in Sweden's Gothenburg within two years. 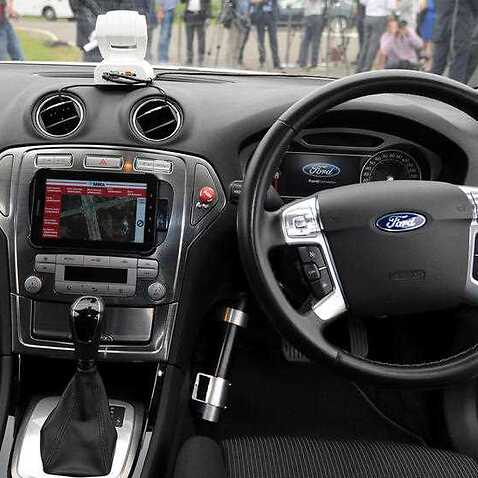 Comment: Driverless cars will change the way we think of car ownership

"This is of course an Australian first and we're very proud," Mr Weatherill said before the historic drive.

"But I know that's not the reason you're all here - you're here to see something awful happen to me."

Fortunately for the premier, the trial went off without a hitch.

"It was very smooth," he said.

"It's interesting how quickly you get used to the car driving itself."

The demonstration was part of the Australian Driverless Vehicles Initiative, led by road and transport research body ARRB.

Mr Weatherill said driverless cars will one day be a windfall for commuters, particularly those driving a long way each day.

"Imagine getting back half an hour of your life both ways," he said.

But he said the greatest benefit, and what is behind the push for this technology, is safety.

"There are just so many people killed on our roads," he said.

"If we can find a way of reducing that, it's obviously a great thing for our community."

Self-driving cars are touted as being able to reduce road accidents by 90 per cent by removing human error.

ARRB managing director Gerard Waldron said about 40 per cent of crashes in Australia are single cars running off the road.

"These cars will keep the car between the white lines and therefore it hasn't run off the road, it hasn't hit the tree," he said.

"They will detect the imminent collision and take all possible evasive action.

"They'll be alert and diligent beyond humans.

"And they won't panic - they'll just do the best they can with the data they've got."

Mr Waldron said before driverless cars become the norm, there are hurdles to clear, such as passing laws to allow them and building technology-enabled infrastructure to support them.

"Australia isn't ready yet, but we now understand there's a need to get ready."