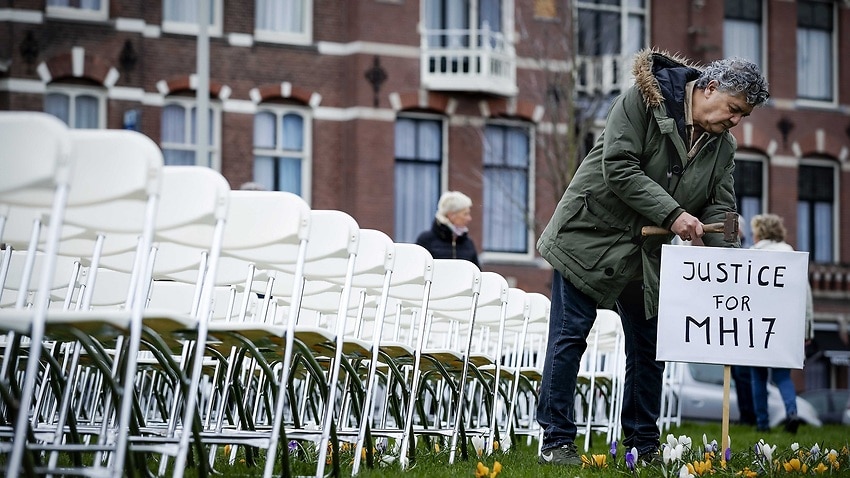 Relatives of victims of the Malaysia Airlines flight MH17 crash hold a silent protest in front of the Russian embassy in The Hague. Source: AAP

The Netherlands says it is suing Russia in the European Court of Human Rights over the 2014 downing of Malaysia Airlines flight MH17 over war-torn eastern Ukraine.

Nearly 300 people on board Flight MH17, en route from Amsterdam to Kuala Lumpur, were killed when the passenger jet was shot down by a missile that a Dutch-led investigative team has determined came from Russia.

A tribute for victims of Malaysia Air flight MH17 in The Hague, Netherlands. Source: AAP

Most of the victims were Dutch and 38 passengers were Australian citizens or residents.

"With this state complaint, the Netherlands stands up for all 298 MH17 victims, of 17 different nationalities, and their relatives," the Dutch government said in a statement announcing the lawsuit.

Russia has rejected the allegation that it provided the missile to a pro-Russian rebel group fighting the Ukrainian military for control of eastern Ukraine's Donetsk region, near the Russian border.

Although Russian President Vladimir Putin has represented such rebel groups in international peace talks, the Russian government has repeatedly denied direct involvement in the conflict.

The Netherlands concluded Russia was liable for the shooting-down of flight MH17 in 2018 and "believes it is important that talks with Russia within the context of state liability continue," the Dutch government said.

The legal proceedings "aim to find a solution that does justice to the enormous suffering and damage caused by the downing of flight MH17," the statement said.