East Timor is determined to draw Australia towards the negotiation table over sea boundaries in the resource-rich Timor Sea.

One of Australia's closest neighbours, East Timor, is trying to draw Australia into negotiations to draw the sea boundary between the two countries in the resource-rich Timor Sea.

East Timorese activist group, Movement Against the Occupation of the Timor Sea (MKOTT) claims that since 1999, the Australian government has received around $5 billion dollars in revenues, from oil and gas fields, in the sea they said belongs to East Timor.

Various activist groups estimate that there are resources worth roughly $52 billion in that body of water.

"We believe that Timor's independence struggle will not be completed until it establishes internationally-recognised boundaries and has control over the resources within those borders."

Online campaigns and protests have been organised by several organisations this week calling for Australia to consider negotiations.

A rally in Melbourne on Thursday, outside the Department of Foreign Affairs and Trade office drew hundreds of demonstrators. It is just one in a series of protests held in the last week: outside the Australian embassies in Dili, Jakarta, Manila, and Kuala Lumpur.

The largest protests, organised by MKOTT , were seen in East Timor's capital, Dili, on Tuesday and Wednesday, where around 20,000 took part.

A rally in Jakarta was also held on Thursday.

Why the East Timorese are protesting

Eka Lopes was one of the thousands who attended Wednesday's protest in front of Australia's embassy in Dili.

Our oil is our future #HandsOffTimorsOil

Ms Lopes told SBS the protestors are demanding the boundaries be drawn so that East Timor has control over the resources in the waters off its coast.

"It is critical for East Timor to have boundaries, because oil is an important resource," she said.

"Australia gets 10 per cent of the revenue from the area (where resources are extracted), this is unfair because East Timorese people believe that if it belongs to us, it should be given to us, not taken by a country that already has a lot of wealth.

Ms Lopes said seeking what her country believes as justice, was the main goal.

"It's an important thing, when something happens to Timor we come out and show our solidarity and show support for each other," she said.

"It's a big deal, not only for people in Dili, but for our entire history."

There's even a protest being held in #Timor's small regional town of Aileu#medianlinenow #HandsOffTimorsOil pic.twitter.com/608VdSfmEa

The Australian-based group, Timor Sea Justice Campaign, want a boundary to be drawn along the median line halfway between the two countries’ coastlines.

Frosty relations between the countries developed after Australia withdrew from the maritime boundary jurisdiction of the UN Convention on the Law of the Sea (UNCLOS) in 2002, leaving East Timor with no legal avenues to negotiate its claim.

The group says one of the areas in question, called the Greater Sunrise gas field, is located 100km from East Timor and is expected to generate $40 billion in government revenues.

According to the group, the area would lie entirely within Timor’s Exclusive Economic Zone.

East Timor's government also believes that if the maritime boundary was decided under the UN convention, the bulk of the oil and gas reserves in the Timor Sea would lie within their territory.

"The Australian government has withdrawn from the relevant international law conventions, precisely because it doesn't have any confidence that what it's doing is legal," he said.

"What they have essentially done is try to bully the Timorese government and grab what they can."

Below is a picture on Twitter from cartoonist Alan Moir.

Online campaign to get Australia's attention

ETAN spokesman John Miller told SBS: "We are doing so to send a strong message to the Australian government that their recalcitrance is affecting its global reputation and credibility."

"ETAN advocated for Timor's self-determination and sovereignty for many years," Mr Miller said.

"We believe that Timor's independence struggle will not be completed until it establishes internationally-recognised boundaries and has control over the resources within those borders.

"This would end Australia's legalized theft of income that the East Timorese are entitled to."

A spokesman from DFAT told SBS previous negotiations between the two countries did not reach agreement on permanent boundaries.

"As an alternative, we agreed to place permanent delimitation of our maritime boundaries on hold and focus on joint development of the resources," the spokesman said.

"Australia stands by the existing Timor Sea treaties, which have provided investor certainty and allowed Timor-Leste to earn US$11.91 billion in revenue and Australia to earn US$1.33 billion. 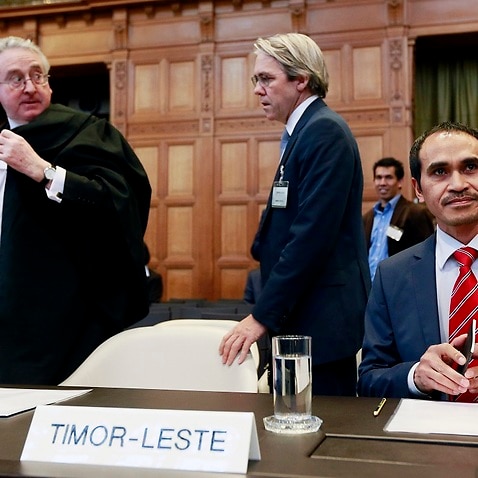 The spokesman said Australia has consistently been open to consultations with the East Timorese Government, and Prime Minister Malcolm Turnbull "recently reiterated a willingness for dialogue on a range of bilateral matters directly in correspondence with the Timor-Leste Prime Minister Rui De Araujo."

The spokesman said stability and development of East Timor is very important to Australia.

"We are Timor-Leste’s largest development cooperation partner (A$95.3 million ODA in 2015-16) and work closely with the government to enhance livelihoods, advance human development and strengthen governance and institutions."